We first discussed the A320neo 195 last week, after a tip off by Mary Kirby of Runway Girl Network.

Wizz Air, of Hungary, currently operates only A320s and A321s. The competition is for 100 aircraft of the re-engined generation. This is a hot contest, with Boeing looking not only to flip Wizz from the A320 to the 737 but also to get a second customer for the MAX 200. Ryanair was the launch customer for the airplane last year, but no new orders have been landed since. Boeing touts the MAX 200 as the perfect solution for LCCs.

The contest is hot enough that our Market Intelligence indicates the pricing is already comfortably below $40m.

Airbus hasn’t announced a marketing name for its high-density version of the 195-seat A320neo, which last month won regulatory approval of the 195-seat concept. This is at 27-inch seat pitch. The MAX 200, which Ryanair said it will configure for 197 seats, will have a mixture of 30-inch and 29-inch pitch. Airbus believes galley cart requirements means Ryanair will have to go to 194 seats.When we queried Airbus last two weeks ago about the A320-195, Airbus characterized this as the “theoretical” maximum seating, intended for LCCs. Wizz currently has 180 seats at 30-32 inch pitch in its A320s, according to Seatguru.com. Clearly the A320 195 has shorter seat pitch but Airbus claims “equivalent” comfort because of new seat designs.

Sticking with the A320 will simplify Wizz’s fleet and maintenance training, etc. But Boeing really wants this win. 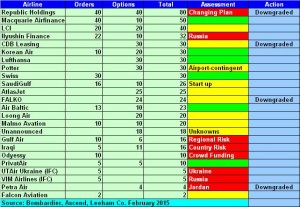 This updated “skyline quality” assessment of the Bombardier CSeries customers appeared in February, and is an update of one we published last year. Sources: Bombardier, Ascend, Leeham Co. Click on image to enlarge.

Bombardier’s large order for the CSeries with Russian lessor Ilyushin Finance Corp may be in jeopardy, according to this article in Flight Global. Flight quotes ILC pointing to repeated delays, the sanctions by Canada over the Russian activity in Ukraine and forced annexation of Crimea. We had this order on our watch list since last year because of the geopolitical situation. I doubt whether the CSeries delays are much more than an excuse.

IFC says, according to Flight, it will decide what to do at the Paris Air Show.

Bombardier and air shows just don’t get along well. It’s not had luck in announcing orders. Seeing a large order cancelled at PAS is not what BBD needs (which is why IFC may be tying its decision to PAS). BBD plans to have FTV 5 (CS100 in full airliner cabin configuration) and FTV 7 (CS300) at the show.

Mitsubishi for the fourth time delayed the first flight of its MRJ90, which was supposed to take to the air in the second quarter, to sometime toward the end of the year, according to this story. Mitsubishi plans to flight-test the MRJ90 in Moses Lake (WA), in the central part of the state. Airspace is plentiful (unlike Japan) and you don’t have China claiming the airspace, as it does over nearby waters. (At least not yet.) Here’s a story about the MRJ90.

The Seattle Times reports that the Government Accounting Office, the watch-dog of US government programs, is raising concerns about the Boeing KC-46A program, its testing, its costs and whether the USAF will green light full production.

Boeing pooh-poohs the concerns, but Boeing has a history of denying problems right up until the point it no longer can.

Several things in The Times story caught our eye. The cost overrun Boeing acknowledges vs what the GAO predicts is only $1bn different. The first KC-46A had only performed one test flight at the time the GAO wrote its report (it flew in December). There are now only about three months of flight testing available before the USAF makes its decision to proceed with production.

Unless Boeing pulls the proverbial rabbit out of the hat, this is beginning to look like another program development debacle, after the 787 and 747-8. Let’s not forget 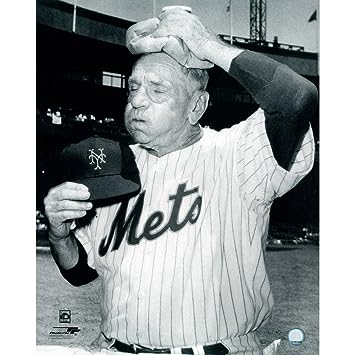 the KC-767 International tanker program debacle for Japan and Italy–only eight of these airplanes were built. This is mind-boggling. Boeing claimed lessons learned from the KC-767 program and adopted the P-8A development model, which actually went pretty well. I’m reminded of the old Casey Stengel lament about the expansion baseball team, the New York Mets. Stengel, the legendary manager of the New York Yankees, was the manager of the Mets, which initially had a bunch of stumblebum-players and the worst record in baseball. Stengel, in a moment of frustration, asked, “Can’t anybody here play this game?”