Aviation Partners Boeing: next step–scimitar for 757, 767

April 14, 2015: Several airlines operate the Boeing 757 across the Atlantic on “thin” routes but sometimes have to do refueling tech stops when high westerly winds

The 757s are aging, with engine maintenance, repair and overhaul costs increasing under the tightly-controlled contract with Rolls-Royce and Pratt & Whitney.

Some airlines want a “757 replacement.” Boeing and Airbus don’t see a market for “just” a 757 replacement and argue the 737-900ER/9 and A321neo/LR are the replacements. Even these fall somewhat short.

Industry observers and pontificators nonetheless are obsessed with a “757 replacement” (except us—we’ve redefined the replacement as one needed for the 225/5000 Sector [225-250 seats, 5,000 miles] and concluded an airplane very similar to the 767-200 is needed). 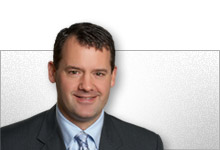 While all this debate is going on, Aviation Partners Boeing (APB) is close to seeking board approval to offer a scimitar option for the 757 that will improve efficiency by about another 1.5%. A scimitar for the Boeing 767 may not be far behind.

With no true 757 replacement in sight and the prospect of a new Middle of the Market (MOM) airplane unlikely until the middle of the next decade, airlines are faced with what to do about 757s and 767-300ERs in the interim.

As fuel prices increased and the cost of maintenance increased (especially on the 757 engines), airlines began parking the 757s in greater numbers while 767-200ERs (the MOM airplane size) also began entering retirement.

Today, fuel prices are in the $50 range, up from the mid-$40s, but still low enough to give some airlines second thoughts about retirement. APB’s plans for scimitars for the 757s and 767s play into the evaluations.

“We were afraid after the Saudis did not cut oil production [and prices fell] that the value of our product would fall,” said Patrick La Moria, Executive Vice President & Chief Commercial Officer for APB, said in an interview. “It hasn’t. There’s new life for the 757 and 767.”

The same improvement is anticipated for the 757s, he said.

“Lower fuel prices mean airlines are making extra investments in aircraft. This is causing airlines to invest in older aircraft,” La Moria said. “United planned to retire aircraft in 3-4 years; now it will be about 10 years.”

“In the strictest sense of the term, our product is discretionary,” La Moria said. “But when airlines were losing money, [they] were buying” winglets. “That’s where the two year payback comes in. We call those a permanent fuel hedge.

“Now, for the first time in our history, domestic airlines are making a lot of money, so they are talking about an investment, the net present value and not a two year payback.”

United’s decision to retain 757s and 767s longer also reflect in part an inability to get new airplanes sooner because of the backlogs that extend to 2020 and beyond, La Moria said.

The scimitar is about economics, but especially for the 757, it’s also about range. Although a 1.5% improvement translates only to about 60nm in range for the 757 or the 767, the 757 is range-critical in certain seasons when westbound trans-Atlantic winds sometimes require a tech stop for fuel. United is the largest user of 757s across the Atlantic.

The 757 scimitars are the priority because of the range issue, but scimitars for the 767 are a natural follow-on.

“We’re looking at the trade studies now for the scimitar winglet for the 767,” La Moria said. “We’re closer to the finish line for the 757.” 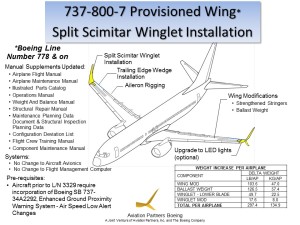 Changes made to the Boeing 737NG to add the split scimitar winglet. Source: Aviation Partners Boeing. Click on image to enlarge.

“FedEx has fallen in love with the 767 freighter [the -300ERF]. We’ve heard they could be considering an order, big numbers. We assume this will happen. They will fly the 767F for 40 years.”

While APB is preparing to launch scimitar programs for the 757 and 767, one engine provider isn’t planning a new Performance Improvement Package for these airplanes. Pratt & Whitney is the sole-source provider for the 767-based KC-46A tanker with its PW 4000 engine. PW also was an engine provider, in competition with Rolls-Royce, for the 757.

“Pratt & Whitney does not have any current performance improvement plans for the PW4000 and PW2000 [757] engines,” a spokesman wrote in an email. “However, about six years ago, we incorporated performance improvements from our Advantage 70 package on the 100” into the PW4000-94” which is the U.S. Air Force KC-46 Tanker configuration. The KC-46 engine will be the most up-to-date configuration of the PW4000. We also made these updates available to the commercial engines fleet.

The scimitar is appearing rapidly on the in-service Boeing 737 fleet, but Boeing went with its own design for the 737 MAX.

The decision by Boeing to put its own “Advanced Technology Winglet” design on the MAX raised some industry eyebrows because the design, from appearances, is identical to the APB scimitar. LaMoire said the agreement between Aviation Partners and Boeing—in which AP has the 55% majority share—provides that Boeing has the right to design winglets for any new airplane (including derivatives such as the MAX). Once the airplane is in service, APB has the first right to design an after-market winglet or, in recent cases, the scimitar, and it can design, sell and install improvements on anything Boeing does.