Now open to all readers.
Introduction
June 9, 2015, c. Leeham Co. Boeing may acknowledge that it will cut the production rate of the 777 Classic by one per month in 2018 as production of the 777X begins, Officials may claim the 777X production is the same as maintaining a rate equivalent to 777 Classic. But a fresh analysis taking these factors into account shows Boeing has a steep hill to climb to maintain sales and cash flows.

We’ve updated our analysis from last February on the production gap facing Boeing to maintain production rates through the introduction of the 777X in 2020 and beyond until the X ramp-up is complete. We’ve taken into account the delivery dates of the 10 Classics ordered this spring by United Airlines. We’ve also taken into account information emerging from Boeing’s Paris Air Show briefings last week. This includes information that Boeing will cut the rate of the Classic by one per month in 2018 from the current 8.3/mo as the X is integrated into the production system.

Boeing’s initial claims that it will maintain the 777 Classic production rate through 777X EIS has been eroding for months.

When the estimated 777X production ramp-up is factored in, Boeing’s task of selling the Classic to maintain rates is daunting.

Boeing still has to sell hundreds of Classics to maintain production even at the lower rate, according to our analysis.

Even with the new information and Boeing’s revised messaging, we remain firmly convinced 777 production rates will have to come down much more than suggested last week.

Boeing just can’t get there from here. The production gap is too great to match even the reduced rate of 88 per year, down from 99 per year, of 7.3/mo from 8.3/mo. 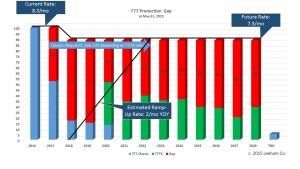 Click on image to enlarge to a crisp view.

As the Figure illustrates, Boeing’s current production gap, even at a reduced rate, is substantial—and a challenge we don’t believe Boeing can meet with an end-of-life Classic series.

Next year’s production is sold out, according to the Ascend data base. Boeing said its 2017 production is half sold out, which Ascend also reflects. From there, the 777 Classic backlog drops off sharply to low double digits.

Boeing hopes the 777F, of the Classic line, will continue for five years after EIS of the 777-9, according to information from the PAS media briefings. Based on an interview we did with Boeing about freighters, and on Boeing’s assumption of a recovery in the global cargo market, production of the 777F would be between one and two per month.

Boeing’s cash flow from the 777 Classic program is already taking a hit. Our Market Intelligence indicates that Boeing has offered the 777F for $150m and that United Airlines’ cost of the 777-300ER is $130m-$135m including Buyer Furnished Equipment, and $120m without the BFE. Aerospace analyst Kenneth Herbert of Canaccord wrote in a research note last month that he believed the 777s were priced the same as the 787-9s UAL swapped for the larger, but older airplane, of $110m. UAL (Continental) was the US launch customer for the 787. A 777-300ER historically sold for $148m-$170m, depending on the customer and quantity, according to long-standing Market Intelligence.

Boeing’s cash flow has been squeezed for many quarters now. Cash flow was well below forecast in 3Q2014 and analysts pummeled Boeing as a result. This led Boeing to ask key customers to accelerate Pre-Delivery Payments (PDPs) and increase the size of Advances when ordering airplanes. This caused the 4Q2014 cash flow to shoot up dramatically. This process continues this year. The purpose is the meet stock repurchase commitments in the billions of dollars annually, according to several Wall Street analysts we have talked to.

The production gap Figure illustrates the looming cash flow squeeze Boeing faces in the coming years from just this program. Furthermore, sales of other 7-Series airplanes are falling off because of the huge backlog that extends beyond 2020 for the 737 and 787 programs. Opportunities to get larger-than-normal advances for orders from these programs are diminishing, too.

Our Market Intelligence indicates Boeing will be forced to face the music on future 777 production rates by the end of this year. Notice of 12-18 months to the supply chain is required to adjust rates up or down.