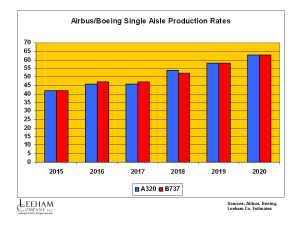 Way back in February we predicted Airbus and Boeing will take their single-aisle production rates to 63/mo. (Figure 1.)

Ken Herbert, the aerospace analyst for Canaccord, noted that even with the same higher rates, Boeing will still out-produce Airbus because Boeing works on a 12-month year and Airbus shuts down the assembly line for a summer vacation. His forecast production chart takes this into account (Figure 2.) 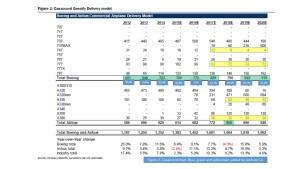 We generally agree with his numbers, including his prediction that in 2018 Airbus will out-produce Boeing. We think there is a likelihood Airbus will do so in 2017 as well, with Boeing 777 Classic rates coming down to a lower level than Canaccord predicts. We’ve highlighted in yellow Airbus and Boeing rates that we think will be lower than Herbert suggests. We also did the math to show the production market share between the two companies on an historical and forecast basis.

Concerns over whether the supply chain can meet the higher production rates have been widely reported. Canaccord’s Herbert identified 11 companies that are key in the 737 supply chain that are public companies he follows:

“Due to its oversize exposure to the 737, we believe Spirit holds significant bargaining power as Boeing looks to take rates higher on the 737, and would not be surprised if there were additional capex or pricing benefits for Spirit if Boeing does in fact look to take rates to ~60/month,” writes Herbert.

“Note that since Airbus takes extensive shut downs in the summer months, this rate of 60/month is basically the equivalent of 55/month for Boeing in terms of delivery slots,” Herbert writes.

“Are we approaching mutually assured destruction?,” Herbert asks. “The primary risk remains the length to which Airbus and Boeing can sustain these unprecedented production rates. We believe this announcement by Airbus is a bullish statement for the aerospace cycle in general, but we believe it does favor the suppliers in the OEM-supplier relationship. Moreover, we remain bullish on the commercial OE cycle, but production rates at these levels are unprecedented, and do add risk for the suppliers, especially if these rates are not sustainable.”

“We believe Boeing will likely respond with a 737 rate increase, but that decision could come later,” Harned writes. “Like Airbus, Boeing has also said that it is oversold on the 737MAX, with its rate going to 52/month in 2018. We normally consider market share unimportant in this industry, but for narrowbodies it can matter. This is because once airlines choose a narrowbody platform, they tend to keep it forever. So, Boeing will not want to miss opportunities to keep airlines as 737 operators, which will likely mean an eventual rate increase. Our understanding is that Boeing can wait longer to announce, if it wants to take rate up in 2019. To match the rate increase from Airbus, Boeing would need to take 737 rate up to 57.5/month (this equates to 690 aircraft per year, since Boeing is on a 12 month year, versus the 11.5 month production schedule for Airbus narrowbodies).”