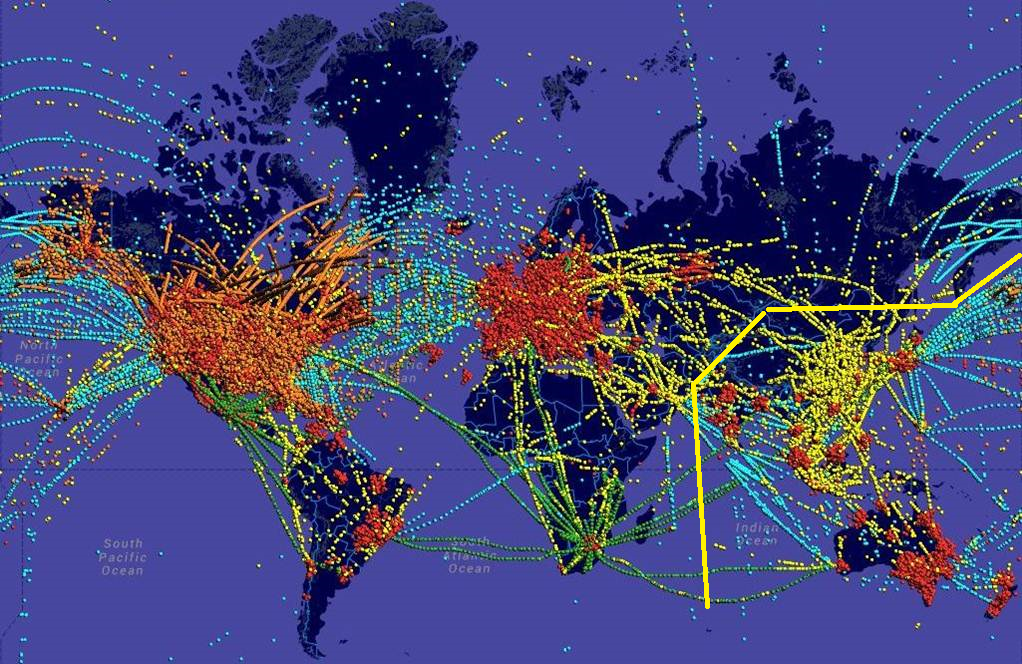 The region has its unique set of Air Traffic Management problems. We will now cover those that must be solved, should the region’s Air Navigation Service Providers (ANSPs) be able to manage the forecasted growth in air travel in a safe way.

An area with very different cultures and air safety backgrounds
The Asia-Pacific region contain countries that have conducted high quality Air Traffic Management for decades (Singapore, Hong Kong, Australia, New Zeeland, Japan…), others with growing capabilities (Indian continent, Thailand, Malaysia, China, Taiwan…) and then countries where Air Traffic Management has a long way to go to come to the standards needed for the future safe growth.

The Air Navigation Service Providers world-wide organisation, CANSO (Civil Air Navigation Services Organisation), identified this spread in cultures and capabilities as the biggest challenge for the region. They therefore drive several programs inside the Asia-Pacific chapter of CANSO where the theme “People Create Safety” is central.

The “People Create Safety” programs are mind-set and competency-oriented to inject a modern safety culture to the different countries Air Traffic Management organisations. This is badly needed, as many areas of the region are just starting with modern thoughts around Air Safety Management.

Cultural change
We will now give a couple of examples of what needs changing. When Malaysia Airlines MH370 disappeared from regular Air Traffic Management, the willingness to come forward and provide information on what had happened was clearly a problem. The reason is the culture of “killing the messenger” or the “person who was on the shift” when this happened. Rather than investigating, understanding and correcting the systemic deficiencies that lead to the insufficient coverage of MH370, the problem is solved by hanging out one or several “responsible” for the cock-up.

Consequently, people have learned to take cover and stay out of the shooting line when things go wrong. If they are getting identified as responsible for any deficiency, this can often mean end of career and job. This is clearly not the method of a learning organization; root causes which are inconvenient for higher administrators or politicians are covered up and the real problems don’t get solved.

To implement a change in the mind-set and practices of the relevant people will require decades of intensive work, where best practices for incident and accident investigation are shared between countries and common safety management practices are developed.

Specific problems
The many different political and cultural backgrounds pose special problems in certain countries. The best example is China, where the Civil Aviation Authority of China (CAAC) does not control any part of the country’s airspace. This is all controlled by the military. North America and Europe have 80% of the airspace allocated for civilian use and the remaining 20% which is controlled by the military can be quickly loaned when no military activity is ongoing; it is the reverse in China.

The military allocates 80% of China’s airspace for military use and lets the growing civil air traffic run in the remaining 20%. There is also no operational way of loaning space between military and civil use at the moment.

Summary
The series shows that there are many challenging areas of Air Traffic Management that have to be managed to allow the continued growth in air traffic. When people in the airline industry talk about the factors what will enable air travel to double in the next 15 years (like it did the historically) the main driving factor is given as the growing middle class in emerging countries that “want to and have the means to travel”. This is all fine and good but there is more to the equation then the will to travel to enable this growth.

When listing the additional factors our debate is often focused on how the aircraft OEMs need to increase aircraft deliveries to existing and new airlines, to make them more capable to handle the growth. We can see that this is only one of several additional factors. We also need the airport and airway space for these aircraft to operate and we need these spaces to be managed in a top notch way for it all to be efficient and safe.

One can discuss which will be the larger problem? To get the necessary aircraft to market or to get the many necessary changes in Air Traffic Management to happen? I would bet on the latter.