August 26, 2016, ©. Leeham Co: Bombardier’s CSeries appears to have a good start in airline operations following its show-and-tell at the Farnborough Air Show in July. The first CS100 entered service with launch customer SWISS International Airlines shortly after the international event wrapped up. The aircraft has now been in service a month.

At the show I was on my way to a meeting with Rob Dewar, CSeries VP and Program manager to discuss the expected in service reliability of the CSeries, starting service with SWISS at the end of the week. I was a bit early and decided to use the time to pass the CS100 exhibition aircraft, the first series CS100 for SWISS. It was flown there by a SWISS crew earlier in the week. 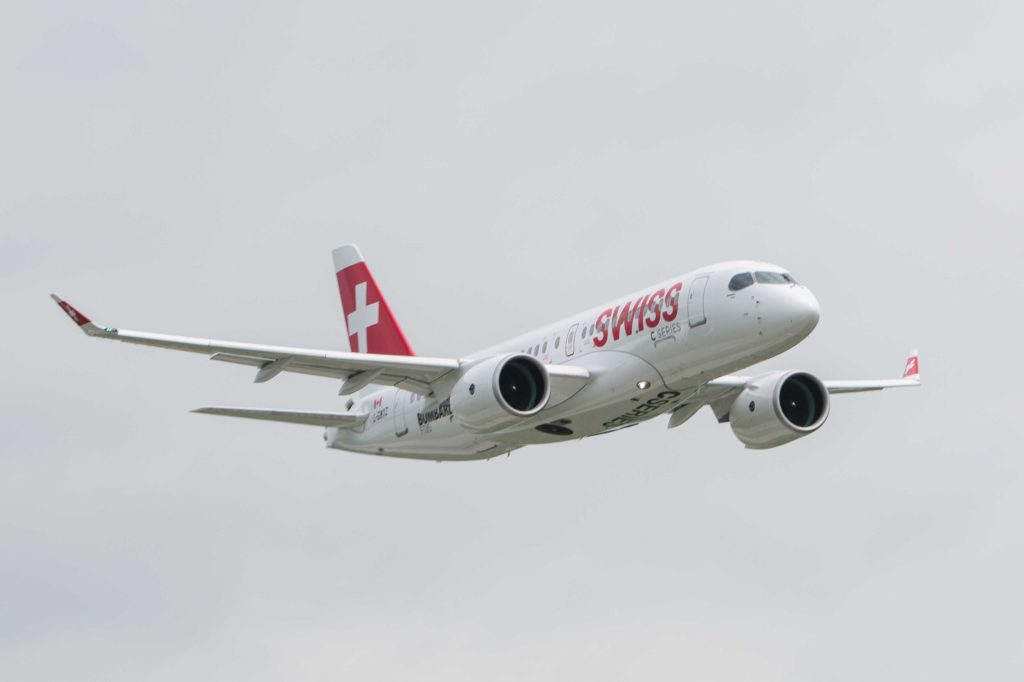 The SWISS pilots were preparing for the trip home to Zurich as I entered the cockpit. We had time to talk about the aircraft and their expectations for the first revenue flight in two days, on Friday, the 15thof July.

The pilots, whom both had flown the Avro RJ85 before, were enthusiastic about the CS100.

“It is a joy to fly; it’s a really good aircraft.” I asked in what sense it was good to fly. “It is the flight laws. They have really succeeded there; it is very stable and easy to fly. You know where you have the aircraft at all times.”

I then asked them about initial dispatch reliability. What was their gut feeling having operated the aircraft for training flights over the last month? “It will be fine,” came the surprise answer.That Dewar would have this response in my pending interview I expected, but line pilots are normally apprehensive. Brand new aircraft spell trouble.

“We did three days with over 100 training touch-and-go landings last week,” the pilots said. “We had no problems. It has been like this since we got the aircraft, the odd small thing, but no real problems.”

Now the first month of airline operation has passed. Time for a first reality check.

SWISS has released first impressions for their operation with the CSeries. It shall be stressed that we are looking at an extremely limited sample; one aircraft flying operationally for one month. The second aircraft started operation one week ago from SWISS Zurich base.

During this time, SWISS has not been forced to cancel any scheduled flights. The aircraft has been un-serviceable one day but that is nothing out of the ordinary. There was an issue with the air conditioning on one flight to the UK which forced a reroute; otherwise flights have been flown as scheduled, sometimes with smaller problems on the “to correct” list.

There are some things to correct in the way the cabin works as well, according to SWISS. Once again, nothing surprising. Modern cabins are complex.

Schedule reliability has been good. It has met SWISS expectations. Better than normal for new aircraft (seems the pilots were right). There is no point in presenting data for the month. Any schedule reliability statistics requires several aircraft in operation and over several months.

Rob Dewar said in the interview that he wanted the CSeries to beat the record for new aircraft schedule reliability, that of the Boeing 777. It was 98.5% at end of the first year of operation. Seems he’s off to a good start.

35 Comments on “Bjorn’s Corner: A good in-service start for CSeries”