June 2, 2017, © Leeham Co.: Embraer is aggressively growing in the private jet market, offering a range of clean-sheet designs to business jet versions of its venerable E-145 RJ and its E-Jet.

The Phenoms are the best-selling private jets in the last three years, said Luciana Froes SVP Marketing, Executive Jets. NetJets, the ownership-sharing jet company, is a large customer of the Phenom.

The Phenoms are small private jets, in the $9m range. The larger Legacy is in the $16m range, says Jay Beever, VP of Interior Designs for Embraer. 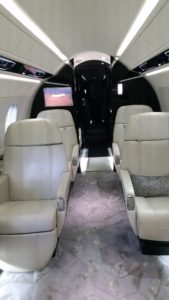 The stand-up interior of the Legacy 450. Photo by Leeham News.

The Legacy 450 offers a stand-up cabin and advanced technology passenger experience. Lighting and other controls are sensory-activated. The system senses the fingers as they approach within centimeters to switch from, for example, the map tracking the flight to light switches. 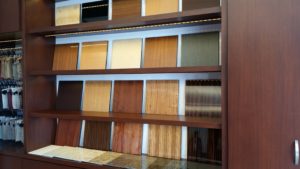 Just a few of the leather choices for the Embraer private jets, shown in the Customer Design Center. Leeham News photo.

As can be expected, the interior outfitting choices are far more varied, luxurious and filled with technological wizz-bangs than airliners. The wide assortment of leather interiors and even stone flooring is on display in the Customer Design center at Melbourne.

Embraer delivered more than 1,100 business jets, said Froes, with 44% in North American. There are more than 700 customers worldwide.

Customers trade up from the smallest Phenom to its larger sibling and on to the Legacy.

All Phenoms are assembled and delivered out of the Melbourne facility. The Legacy jet is just beginning delivery here, too.