John Slattery, president and CEO of Embraer Commercial Airplanes, revealed the improvements during its media days at its Melbourne (FL) facilities.

Slattery said that with 50% of the flight testing done, better aerodynamics than forecast proved the airplanes can go farther.

Slattery added the E2 is more efficient on a per-seat and per-trip basis than the larger Bombardier CSeries, with one caveat: the higher crew costs for the CSeries makes the difference. 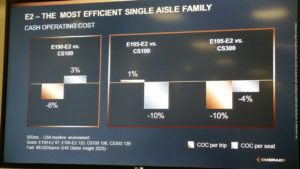 Embraer’s analysis of its economics vs the Bombardier CSeries. Click on image to enlarge. Source: Embraer.

If the crew costs were equal, Slattery said the comparison would be flat.

Slattery ducked a question about his views about the Boeing complaint over alleged price dumping by Bombardier with an order last year by Delta Air Lines.

Slattery previously was critical of Bombardier’s pricing in a competition for United Airlines, in which Embraer competed with BBD and Boeing won.

“I’m going to be very careful about what I say,” Slattery said. “We are not interested in speaking about that campaign explicitly. Our position is, as an independent manufacturer, it’s just our positioning that fair and balanced commercial trade is the way to go.” 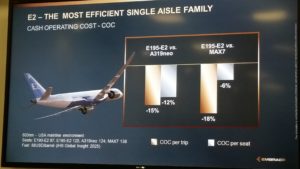 As would be expected, the E2 has better economics than the Airbus and Boeing airplanes, by a wide margin.

But as with the CSeries price dumping question, Slattery dodged a thinly-veiled second attempt at drawing him into the controversy when LNC pointed out that neither the A319neo nor the 737-7 have sold well and asked his view about the market viability of the two airplanes.

“Because of [the earlier question], I’m going to skate very carefully,” Slattery said. “I’m not going to go into that. All I would say is that we spend our time at Embraer trying to develop the best possible solution…. I believe that with the E2 platform, we will have good [market] penetration with incumbent operators and with new operators in North America.

“The economics speak for themselves,” he said.