Pontifications: Facial recognition coming to an airport near you

By Scott Hamilton. Would you really want this face in facial recognition?

The new terminal T4 at Singapore’s Changi Airport is completing testing of the system before the terminal is open.

William Bain, an occasional contributor to LNC, recently was at the airport for a preview. He provided us with several photos.

This is the latest step in an emerging trend away from documents in favor of biometrics, scans and other technology.

For some, the convenience of this method eliminates carrying the piece of paper. For others, especially those flying on ultra-low-cost carriers that charge even for printing a boarding pass, this avoids another annoying fee that in aggregate with others begins to add up to real money.

For the airlines, getting away from paper saves money (and it’s good for the environment). 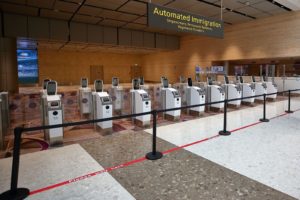 I must confess, I still like my paper boarding pass. But then, I preferred three- and four-engine airplanes over water until there wasn’t a choice any more.

Fingerprints are becoming more common in operation. The US Global Entry system for Immigration has long used fingerprints as identification for the kiosks upon arrival in the US. Those participating in Global Entry get the fast processing system after first going through a computerized background check, a short interview process and fingerprinting.

Upon entry into the US, you place your fingers on a kiosk scanner, along with your passport in the reader, and you’re processed, get a piece of paper to an agent at the exit and you’re done. 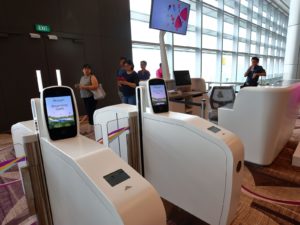 I resisted joining TSA Pre-Check and Global Entry due to privacy issues (fingerprints, background checks) as a matter of philosophy. But the lines are just so long and clearing processes so cumbersome that I gave up and went with it. I must say I’m glad I did. The time savings and hassle-free go back decades, before you had to undress to get through the magnetometers and airlines were running 60% load factors instead of 85%.

A private company called Clear has a fingerprint check-in, enabling members to bypass the long lines of people who are not members of Global Entry or TSA Pre-Check, going straight to X-ray and Security. As a Global Entry member, I’ve not used Clear but I’ve seen it at Sea-Tac Airport. You place your finger on a scanner and get “cleared” to security.

Facial recognition is the next step. There is some use in Boston, Amsterdam, Helsinki and Brisbane. Retinal scan is also coming.

I have to say that with my mug, I’m not too keen about facial recognition. But from what the article describes, and William Bain’s preview at the Singapore suggests, this could help speed people through the airports and perhaps help security.

Technology seems to be picking up speed. Some of these used to be elements of science fiction or futuristic movies, or limited to high security processes. Now it’s part of everyday life.

6 Comments on “Pontifications: Facial recognition coming to an airport near you”