The Chinese government is worried about the growing exit of capital and growing debt levels of companies, including HNA, according to several news reports.

In a rather dire report by Crescat Capital of Denver, issued Aug. 5, the company calls China “by far is the biggest credit bubble in the world today.”

tremendous risk of global contagion because it coincides with record valuations for equities, real estate, and risky credit around the world.”

Crescat continues, “In our analysis, the Chinese economy today is a classic Ponzi finance regime…and has been so in an egregious way since 2008. At the center of China’s credit bubble is its massive and opaque financial sector. The China Banking Regulatory Commission reports that the Chinese banking system had USD $35 trillion in on-balance-sheet banking assets through the first quarter of 2017. This is an incredible more-than-fourfold bank-credit expansion since 2008…. As a result, based on the ratio of on-balance-sheet banking assets to GDP, China’s banking bubble today is more than three times larger than the US banking bubble prior to the global financial crisis!”

There are numerous press reports about the Chinese government’s look at HNA Group. HNA has billions invested in a variety of industries, but LNC only follows commercial aviation—hence this remains the focus today.

In 2015, HNA made an all-cash offer through a small leasing subsidiary in the Middle East for Avolon, of Ireland. Two years later, Avolon purchased CIT Aerospace, the leasing arm of CIT, the big US investment bank. CIT was one of the US institutions caught up in the Global Recession of 2008. During its work-out, CIT considered selling Aerospace, according to federal financial filings, but nothing came of it at the time. 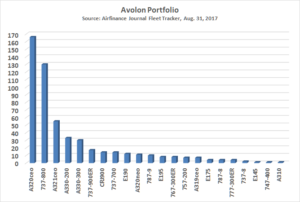 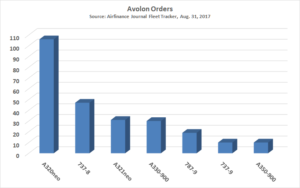 Late last year, CIT decided to dispose of Aerospace. This effort was accomplished this year.

Hainan Airlines, one of China’s more successful carriers and one that was not directly controlled by the federal government in Beijing, was founded in 1993. Hainan Airlines, as the name suggests, was located on the island of Hainan and had some autonomy from Beijing, instead being owned by the government of Hainan.

For Boeing, “China Inc.” is its largest customer. There was a backlog of 303 aircraft at July 31 (August hasn’t been reported yet), more than any other country. Airbus has about 150 orders identified as coming from “China Inc.”

Airbus does not specifically break out orders by country, as does Boeing. Each has Undisclosed customers, which includes China. In recent years, Airbus officials boast that they have more orders in China than Boeing.

Effects of a credit crisis

If a credit crisis does happen in China, the implications to the commercial aviation industry could be profound.

China has been especially aggressive in creating operating lessors, either through organic growth or by acquisitions, such as HNA Group.

HNA’s reaching into the commercial aviation industry has been unlike any other Chinese company, however, given its investments in airlines in addition to acquisition of lessors.

According to market sources, Chinese sourcing considered financing some of the Boeing aircraft ordered by Iran Air, but government scrutiny of debt levels may have derailed this.

If sources are correct that financing of Iran Air aircraft is on hold, this for Boeing creates a special problem: the Iran deal is critical to filling the production bridge on the 777 Classic to the 777X. Without it, addition production rate cuts are likely.

← Pontifications: Facial recognition coming to an airport near you
Boeing claims WTO victory; not so fast, claims Airbus →