October 27, 2017, ©. Leeham Co: In this and the following Corners, we will review the competition for first manned flight between Samuel Langley, high ranking scientist of Allegheny Observatory in Pittsburgh, and the Wright Brothers, bicycle manufacturers in Dayton, (OH).

We described in the last Corner how Langley researched airfoil characteristics with a giant whirling arm, built beside the Observatory. The Wright Brothers went another route; they built a wind tunnel in their workshop. 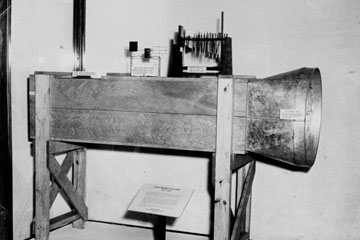 The aerodynamic information that puzzled the Wright Brothers

Wilbur and Orville Wright had a small bicycle manufacturing shop in Dayton. The brothers were intelligent, disciplined and inventive. They got interested in manned flight from reading about Lilienthal’s glider activities in Berlin.

In 1899, Wilbur wrote to the Smithsonian Institution and requested a list of all relevant literature on flight. The secretary of the Smithsonian sent Wilbur references to available reports and books. Among them was “Progress in Flying Machines” by Octave Chanute (published 1894). It summarized the aeronautical knowledge of the time and included excerpts from Lilienthal’s articles that he published in German aeronautical journals.

Chanute was in contact with the Wrights over the years and kept them informed about new information, like the publication of Langley’s Experiments in Aerodynamics 1902. Wilbur Wright read the reports and books and compared it to their own experiences with their gliders. A lot didn’t fit.

The Wrights decided to measure all parameters themselves, as they no longer trusted what was in the reports. And with good reason. A critical parameter, used by many at the time, was the coefficient for air pressure working on a flat plate perpendicular to the air stream. Smeaton had measured the coefficient with a whirling arm in 1759. He publicized this to have a coefficient of 0.005. The correct value (with the units he used) was 0.0029, a fault of 72%!

The Wrights designed a wind tunnel (Figure 1) to do their own aerodynamic measurements. It wasn’t the first wind tunnel. The first was built in the UK in 1871, beside the Greenwich observatory, by Francis Whenham. He measured the forces of angled flat plates placed in a 3m by 0.5*0.5m tunnel, where a fan drove the air to 20m/s. As the tunnel was not baffled to get a non-turbulent stream and the measurement was made with coil spring balances, the data was not very reliable.

Wenham made some important discoveries, however. He found the center of lift was concentrated to 1/4 of the cord from the leading edge of the plate. Therefore, he suggested it was a waste to make the cord long; it was better to make a wide and narrow plate, i.e., give the plate a high aspect ratio.

Langley made the same discovery and wrote about it in his 1902 book, Experiments in Aerodynamics. Chanute sent the Wrights this book but by then they had decided not to trust others, better to do the fundamental research themselves. They can’t be blamed for not taking Langley’s findings to heart.

While Langley was right about the superiority of higher aspect ratio plates in the book, a lot of other stuff was suspect. Langley advocated the use of flat plates, despite his visit to Lilienthal in Berlin in 1895 and what he learned about the higher lift with curved profiles (Langley didn’t think highly of Lilienthal). He advocated the use of flat plates, as he was convinced lift came from air colliding with the bottom side, pushing the wing up.

The flow over the top was non-important, despite his test with cambered airfoils showing better lift to drag ratio. He also pushed his “inverse” drag law (see last Corner) as universal and a big discovery.

The Wright brothers by now were convinced. The way out of the contradicting information received through Chanute was to do their own basic research. The wind tunnel was similar to Whenham’s (they had access to his work and later wind tunnel tests by Horatio Phillips).

The tunnel made of wood was 1.8m (6ft) long, 0.46m (18in) wide and 0.46m (18in) high. Its fan was driven by the workshops 1hp gasoline engine via belt drive, it could get the air up to 13m/s (30mph). To get a non-circulating air at the windowed measurement section at the back, it was baffled internally.

In this tunnel, the Wrights placed their research objects on a measurement balance of very smart design. We will talk about why in the next Corner.