Airbus competed for the deal with the A350-900. Emirates previously canceled an order for 50 A350-900s and 20 A350-1000s, an embarrassment at the time. Losing this order was largely expected, but based on comments from airline officials earlier this year, it seemed that the order would be put off until next year.

Bloomberg News has this devastating report.

Unreported from this order is that it seems to indicate a changing strategy for Emirates.

The order for 40 aircraft is barely more than half of the cancelled orders. Although Boeing officials touted a strong future for the Middle East airlines, the reduced size of the order suggests Emirates is taking a more conservative approach toward growth.

The order may also suggest that Emirates is recasting its growth ambitions to destinations nearer to its Dubai base. 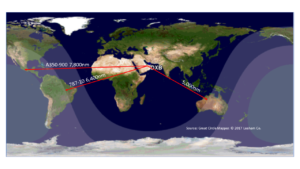 The A350’s fate may have been sealed with the 777X order. The slightly more-efficient 787-10 over 5,000nm may have tipped the scales (setting aside the commercial terms of the transaction).