April 17, 2018, © Leeham News: Boeing will implement a manufacturing shift later this year designed to bring the 787-8 into more conformity with the production of its larger siblings, the 787-9 and 787-10. 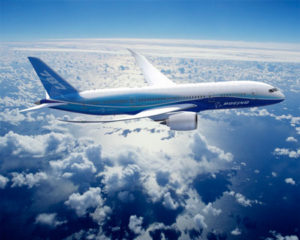 The move, involving the aft fuselage production, will reduce costs and increase commonality between the first family member and the two larger models.

The plan was first reported by David Wren of the Charleston Post and Courier.

The 787-8 became Boeing’s problem child, plagued by design and production issues that caused the entry into service to be nearly four years late. Cost overruns in the program peaked at $30bn+ in deferred production and tooling costs. Boeing will be reducing these costs for the next decade.

The 787-8 lacks commonality with the 787-9 and 787-10. The latter are 95% common, making production easy and cost effective. The 787-8 is only roughly 30% common with the 787-9, Darrell Larson, director of aft-body operations at Boeing’s Charleston plant, acknowledged during a press briefing in advance of delivery of the first 787-10.

The lack of commonality complicates production and boosts costs on the 787-8 as it can’t benefit from learning on the 787-9 and -10 on the part that differs.

“There’s a concerted effort to get more cost out of the -8, manufacturing, contracts, model conversion, etc.,” a non-Boeing source with knowledge of the situation tells LNC. “Several different people are tasked with improving the relative economics.”

Boeing CEO Dennis Muilenburg and his predecessor, Jim McNerney, were frank in their earnings call statements that the company’s preference was to sell the higher margin (more profitable) 787-9 and 787-10.

Indeed, sales of the 787-8 virtually dried up until this month’s order by American Airlines for 22. Deliveries begin in 2020.

“The Dash 8 is built significantly different than the Dash 9 and Dash 10,” Larson said. “We have changes that will be introduced between the Dash 8 and Dash 9 so they will be highly common later this year, such that the 8 and the 9 and the 10 will all build very, very similarly.

“The 8s and 9s in this building will build the same. The only variability we’ll see is the 10 is eight feet longer. We’re very excited about this common aft.”

Larson said that all of the design and elements in the Dash 9 are beginning to be implemented in the Dash 8’s structure. “The unique elements between the 8 and the 9, whether it’s part of the frame design, they’ll build the same.”

What this means for cost cutting and how common the 787-8 will be with the larger aircraft are two key questions.

“We have always said that significant commonality across the 787 Dreamliner family is one of its top-selling points,” a Boeing spokesman at the Renton headquarters wrote in an email. “The commonality allows our customers to seamlessly operate the -8, -9, and -10 across their network. And we continuously look for ways to optimize our family of airplanes.”

Does the investment mean Boeing is breathing new life into the 787-8, supporting sales of this model that had all but been abandoned?

It would seem so.

Given the aggressive war Boeing has engaged with Airbus to kill the A330-800, Boeing’s renewed interest in the 787-8 is apparent.

Boeing publicly insists the NMA won’t cannibalize the 787-8, but it’s known to be a topic of debate internally at Boeing’s Longacres sales headquarters.

Furthermore, only 30% of the 787’s missions are more than 5,000nm, according to an LNC analysis. The mission and product overlap is obvious.