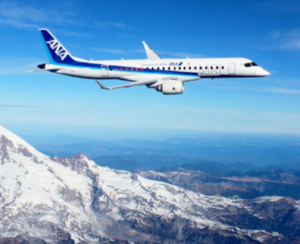 The MRJ program has “laser focus on delivery for our launch customer in 2020, ANA,” program chief Alex Bellamy said. Mitsubishi Aircraft brought in the soft-spoken British native in 2016 from Bombardier’s CSeries.

There is more riding on the MRJ90 than a typical new jetliner. It is Japan’s first airliner since the NAMC YS-11 in the 1960s.

“We’re not just building an OEM company here, we’re also building an industry” for Japan and a new certification regime for the country, Bellamy said.

MAC’s parent, Mitsubishi Heavy Industries (MHI), and the Japanese government are committed to the goals. No doubt, Japan would like to show off the plane when it hosts the 2020 Summer Olympics. It cannot afford further delays.

“We’ve accomplished the schedule we set out to accomplish over the last 12 months…and the countdown to delivery has begun,” Bellamy said.

A lot still must happen before the MRJ can begin carrying passengers. It must finish development flight testing, create a customer support system, help Japanese aviation regulators create a framework for certifying a new jetliner, and complete type certification.

Since starting in 2015, the program is more than halfway through flight testing with about 2,000 hours but has another two years to completion.

While that is much slower than Boeing and Airbus spend testing new designs, Mitsubishi has never launched a new jetliner, Bellamy said. “We don’t have that pedigree.”

Mitsubishi’s inexperience with launching an airliner was highlighted in January 2017, when it announced a fifth delay, this time for two years. The company discovered its wiring design did not meet tighter certification safety standards adopted by the FAA in 2007. Mitsubishi engineers already were designing the MRJ at the time and failed to apply the changes to the 23,000 wires in jetliner, Reuters reported when the delay was announced.

Mitsubishi is using flight testing not only for certification, but also to improve the airplane’s design, Bellamy said.

“We’ve expanded the full envelope” of the aircraft, he said. “I mean hot and cold, I mean high and low, I mean fast and slow.”

The company started certification testing in late 2017 with its rotor locking test with the FAA and Japan’s Civil Aviation Bureau (JCAB). Certification work will pick up starting in the third quarter of this year, continuing into 2019, he said.

Two more aircraft—line numbers 7 and 10—are being added to the flight test program next year. They will be in delivery configuration when they arrive at Moses Lake.

The MRJ program has been radically re-organized, going from functional units, such as engineering or manufacturing, to integrated product teams responsible for a specific product, such as interiors, and supported with its own functional groups. Each team leader runs it “like it’s his own factory, like his own business unit, like it’s his own aircraft” program, Bellamy said.

The re-organization began with MRJ’s Moses Lake operation and has since been implemented across the program.

MHI has invested expanding MRJ’s production facilities in Nagoya. It has added two paint shops and set up a final assembly plant for the PW1200G.

Mitsubishi also is standing up a customer support network. It has poached talent from Embraer and Boeing and is working with ANA to be ready for entry into service. Customer support in Japan is based in Nagoya; the company has not selected a US hub yet.

The program can draw on its parent company’s customer support experience, Bellamy said. “MHI has a pedigree of supporting complex things” around the globe.

The MRJ’s development costs have exploded to more than $5.4bn, according to recent reports in the Japanese press.

Mitsubishi Aircraft officials would not say how much the company has spent so far.

MHI told investors in May that MRJ development costs are now expected to peak this year and start declining in 2019.

The cost overruns and delays don’t worry Jep Thornton, managing partner at lessor Aerolease Aviation, which has ordered 10 MRJ90s with options for another 10. Thornton was at the media briefing as the program’s first lessor.

As with any new airplane program, “the first group of airplanes are going to be challenged, because they’ll be a little heavier. And as the program matures, they’re going find improvements, benefits, make it a little lighter,” he said.

Not far away from MRJ’s flight test center, which was built and is owned by its Seattle-based engineering partner AeroTEC, is N507BJ, the 11th 787 produced. Like the rest of Boeing’s early-build 787s, the plane was too heavy and too late for any commercial airline to take delivery. The airplane is being converted by Greenpoint Technologies for Korean Air. According to Flightglobal, the airline plans to operate the plane for the Republic of Korea government.

No modern jetliner suffered more delays or cost overruns than Boeing’s 787 program. But Boeing resolved the problems, and today it assembles 787s at the fastest rate for any widebody aircraft.

Thornton has the same confidence in the MRJ, which he calls a “game changer” in the regional jet market.

With MHI behind it, cost overruns won’t threaten the MRJ, the way they did on Bombardier’s CSeries, which had to be bailed out with public money and was then acquired by Airbus, he said. “Mitsubishi doesn’t have to get bailed out.”