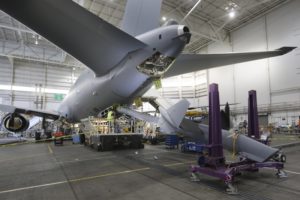 Boeing has made one international sale of the KC-46A, to Japan for one airplane. Mike Hafer, manager of Global Sales and Marketing, says Japan has funds to order three more, preferring to operate squadrons of four aircraft. These will supplement the four KC-767 International tankers Japan ordered in 2003. Italy is the only other operator of the KC-767 new-build tanker (also for four).

Hafer said there are several international customers who “are interesting in pursing the KC-46,” but no orders have been placed. He sees a potential for up to 60 international sales.

The KC-46A is a brand new airplane, trailing the KC-30 by years.

“We didn’t have a hard asset [to sell],” Hafer said. “It was a paper airplane. A lot of those competitions came down to Airbus had fielded an airplane. Customers could jump aboard the airplane and go fly it. Boeing was talking about the plans and what could be developed. We could lay out the blueprints. It was really kind of hard to compete on that level.”

Hafer said the KC-30 and KC-46A “are two different airplanes,” beginning with the smaller footprint of the KC-46A making it closer to a KC-135 replacement than the larger KC-30.

The KC-46A can operate out of smaller airfields than the KC-30, he says, and get “closer to the fight.” This was one of the many arguments Boeing and its supporters made during the KC-X competition.

Hafer ticks off a list of features of the KC-46A, ranging from key electronic systems, defensive measures, electronic protective measures, flight deck armor and even the large cargo door that are standard on the Boeing airplane and options on the KC-30.

There were some international customers that needed a large passenger jet that also did aerial refueling who chose the KC-30, he said.

“[The KC-46A] is an air refueling that can do multi-missions in a medium-threat environment,” he said. “It’s ready to go from day one. It really depends on what the host nation’s priorities are and what they need that airplane to do.”

The current status of the KC-46A, following flight testing and ramp validation, “that has it off international interest,” Hafer said. Even some of the nations flying the KC-30 expressed interest in the KC-46.

Historically, once the US Defense Department made a procurement decision, others followed. In the case of the tanker, Hafer said Airbus is “a great, tough competitor. I do not denigrate the airplane. It carries a large fuel capacity. There’s a price to be paid for that when you are carrying around 110 tons of fuel. But politics really does enter into it.”

Politicians look at jobs and “it’s a tough bill of sale to say you’ve gone to a foreign country to buy their product as opposed to buying the home product,” Hafer said.

Indeed, jobs created and supported by Boeing vs Airbus in the KC-X competition were a huge political element of debate. Even though Airbus pledged to build a US assembly plant for the KC-30, the airplane would largely be manufactured overseas. Conversely, observers gave Boeing no chance of winning tanker contracts in France and Germany, where the A330 is made.

James Burgess, VP Dep Program Manager for KC-46, who came from Boeing’s P-8 anti-submarine aircraft program, said that it took a while for foreign countries to order the 737-based airplane (even though there isn’t a comparable, competing product).

Hafer said the KC-46 can be reconfigured for personnel, cargo or a mixture in two hours.

The KC-46A is designed to operate entirely “dark,” if necessary, including on the ground. Personnel wear night vision goggles. When airborne, navigation and interior lights may be turned off. On the ground, servicing and provisioning may be carried out without lights with the ground crews wearing night vision equipment.

Boeing designed a ground-start Auxiliary Power Unit apparatus located in the belly that allows the crew to press the self-contained APU start button, shaving minutes off the readiness time while the crew scrambles into the cockpit and goes through the pre-flight checklist.

There is also a refueling port in the belly, eliminating the need for ladders and wing-located refueling connections at more primitive airfields.

As Boeing produces more and more airplanes and gains experience, the learning curve reduces costs and production time. As noted in Part 1, the USAF only wants 15-18 airplanes a year. But this doesn’t mean that there are other ways to cut costs.

In what may be a small example: The refueling boom is produced at the EMC, but this wasn’t always so. The boom originally was produced at another Boeing plant in South Puget Sound, easily up to a two hour drive from the Everett plant at rush hour in the highly traffic-congested Seattle area.

The boom production was relocated to the EMC, saving time and cutting costs.

New ways to produces parts, cut the number of parts and cut the time to make the parts were identified and engineered. In one case, the time to produce a key component for the refueling boom was cut by 50%, he said.

The clamshell doors to the APU, located in the tail and initially obstructed by the refueling boom, were redesigned, Hafer said.