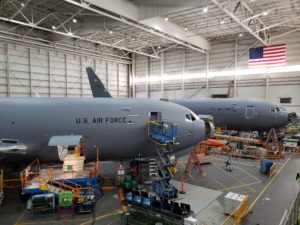 July 3, 2018, © Leeham News: Boeing’s development of the KC-46A aerial refueling tanker for the US Air Force is behind schedule and over budget, but production is underway and 34 tankers have been built.

Deliveries are running more than a year behind the original schedule. Boeing is already in production on a fourth tranche of tankers even before the next contract is signed, which is expected this summer.

Finally, after several delays, Boeing and the USAF announced the first tankers will be delivered in October, about 18 months behind schedule.

“In partnership with the U.S. Air Force, our team has made great progress on the KC-46 Tanker,” Boeing said in a statement. “With first delivery now set, the men and women of the Air Force know when they will start receiving this warfighting capability. The KC-46 is a top priority for The Boeing Company, and we have the best of Boeing working to ensure the U.S. Air Force gets their tankers as quickly as possible.”

LNC visited the Everett Modification Center (EMC) this month, speaking with officials of the program, who explained progress on the tanker line.

Learning from the P-8

Lessons learned from the six test airplanes, including two production models, from the unrelated P-8A program and the original KC-767 International tanker development are implemented on the KC-46A. The lessons benefit the production aircraft to date and will provide more efficiencies going forward.

James Burgess, VP and deputy program manager for the KC-46, said that the KC-46 production model was based “to some degree” on that used for the P-8A, the anti-submarine airplane based on the 737 NG, which is built at the Renton 737 complex.

“The P-8 was the first commercial derivative aircraft for Boeing where we did an in-line or an in-sequence production,” he said. Burgess came to the KC-46 program from the P-8.

The Navy awarded the P-8 contract in 2004 in part based on the proposal to build the aircraft in-line in Renton, Burgess said.

All previous military derivatives of commercial aircraft came off the production line as a “green” aircraft and modified post-production, he said.

“Boeing Defense would buy a green commercial aircraft from Boeing Commercial. Generally we’d fly it to Wichita (KS) and do post production modifications, cut it up, install all of the provisions for military use and whatever structural mods were required,” Burgess said. “We do all of that after the plane rolled out of the commercial factory.

“With P-8, that changed. We did all in-line engineering. All of the provisions to make P-8 a fully militarized aircraft were done in-line,” he said. When the P-8 rolls out of the factory, it goes to BDS as a fully provisioned military aircraft.

“The number of aircraft that the Navy bought right of the gate (117 aircraft), it just made sense to do in-line modifications,” Burgess said.

The P-8 production process created a lot of lessons learned for application to the KC-46, he said. Among them: engineering on the defense side that flowed into the commercial factory and the defense supply chain, with parts procured by Boeing Defense delivered to Boeing Commercial for installation.

Although Boeing had serious challenges with the KC-767 tanker program, which was a commercial-to-modification approach, Burgess said the switch to in-line with P-8 was driven more by economies of scale vs. lessons learned on the tanker.

Boeing took huge write-offs for the eight KC-767s produced (four each for Japan and Italy). Flutter was a problem for the wing refueling pods and in the first round of the KC-X competition between Boeing and Northrop Grumman/EADS (Airbus), which Northrop won, the USAF marked Boeing down for risk factors arising from the KC-767.

Like the P-8 and unlike the KC-767, the KC-46A comes out of the Everett (WA) Boeing Commercial Airplanes factory fully provisioned as a military aircraft.

“This facility is all about installation of the military systems,” Burgess said.

Post-production and modifications at the EMC

The EMC originally was developed for the troubled 787 program. Rework and lessons learned from flight tests and production were implemented in 787s as airplanes came off the production lines and the early, notorious Terrible Teens were finally sold.

The EMC now is used to effect changes identified as the KC-46A goes through flight testing and changes to production airplanes are identified.

The wing pods, which proved troublesome on the KC-767, are delivered as a separate kit. Not all of the planned 179 KC-46As to be procured will have them; only about 40 will.

All 179 will be equipped for the pods, called Wing Aerial Refueling Pods or WARP. Trailing from the outer portions of each of the wings, the KC-46A can refuel two airplanes at once.

The boom, in the tail of the airplane, and the center-line drogue, serve different refueling requirements.

Change incorporation at the EMC

These “change incorporations” add to cost of the current production airplanes. So do ideas that emerged from the flight testing.

“We made a commitment to the Air Force to begin the production system in parallel to the flight test program,” Burgess said. “All of the discovery and changes that come out of flight test go into a modification of the aircraft before they will deliver.” This adds to the initial Low Rate Initial Production (LRIP) time, but Boeing is transitioning into the “steady state” production flow.

Boeing set up lab-testing for systems integration identified in flight testing that resolved issues going into the LRIP airplanes.

“That was a big lesson learned from P-8,” he said. “P-8 did a really good job setting up system installation labs. KC-46 had a full-blown lighting laboratory. The aircraft is completely capable of covert aircraft operations.”

The KC-46 can go completely dark, with the crew using night vision goggles in the air and on the ground. A lighting lab tests these operations. There is a fuel system lab in which fuel is flowed through the entire aircraft, including the boom and the drogue.

Boeing’s previous 767-based tanker program, the KC-767 International, was a costly, risky program that initially weighed against Boeing in the KC-X competition.

Burgess said there were lessons learned from operating the refueling system. The remote vision system was introduced on the KC-767. This is the video refueling process that is a major shift from an airman lying in the tail guiding the refueling boom to the receiving aircraft.

Burgess said the KC-46A is built over a 10-month period. About eight months are in the factory, followed by work in the EMC, ramp-side testing and about a month at Boeing Field for final flight testing and work before delivery to the USAF.

The in-line production system adopted from the P-8 program is perhaps the highest-profile element of “One Boeing,” the concept introduced by former CEO Jim McNerney to leverage the knowledge between Boeing Defense and Boeing Commercial.

“There’s a lot of build from the P-8 that is designed by the Defense side of the business, or a lot of it was designed or co-owned by Boeing Defense and Boeing Commercial,” Burgess said. “Figuring that process out, where we had employees on the defense side and employees and the commercial side, releasing engineering into the commercial side of the business that then resulted in parts procurement, different processes from different heritages, all that integrating together into an in-line build where 85% to 95% of the plane is built in the commercial factory before it ever comes to the defense side—that was the big lesson learned.”

The concept was applied to the KC-46.

Years ago, when the 787 program was still in trouble and Boeing needed a surge line in the Everett factory to catch up, the only location available was one-half of the 767 assembly line. The 767 program was limping along as commercial orders dried up.

Boeing decided to reduce the 767 line to the back half of the factory and in the process, undertook a lean manufacturing process that sped production and reduced costs of building the 767.

At that time, the KC-46 tanker program was in its infancy.

However, this move by Boeing Commercial Airplanes ultimately benefitted the tanker. The in-line production results in a KC-46 in production before or after a 767-300ERF. The freighter business is seeing an uptick that resulted in Boeing announcing a production rate hike in the entire line.

Long-term, tankers represent the future of the 767 line, but FedEx placed an order for more 767 freighters this month.

“The design of the KC-46 leveraged heavily the freighter design,” Burgess said. The basic floor of the freighter is in the tanker and many systems are identical.