July 3, 2018, © Leeham News:   Mitsubishi Aircraft Corp. executives insist the MRJ90 is past the seemingly endless delays that have dogged its development. It is on track toward type certification and first delivery in mid-2020.

The problem is when it arrives, the 81-seat MRJ90 will be the wrong fit for the US market. Program executives praised the plane’s advanced design during media briefings at the MRJ flight test center in Moses Lake (WA), but when they spoke about market opportunity, it was for the smaller MRJ70, which is at least three years away from entering service.

Starting in 2022, Mitsubishi expects a wave of 50-seat regional jet retirements in the North American market. And North America—specifically the United States—”is the most important market for us to make this business successful,” said Yugo Fukuhara, Mitsubishi Aircraft vice president and general manager of sales and marketing.

MRJ90 sales in the US have stalled, but oncoming retirements of 50-seat jets offers an opening for the smaller MRJ70. Following the up-gauging trend in commercial aviation, Mitsubishi expects airlines will replace 50 seaters with something bigger, such as the MRJ70, which can seat 69 in dual-class configuration. 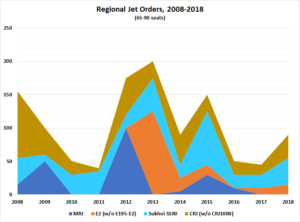 Program executives didn’t say chances are slim for relaxing Scope Clause to allow regional carriers to fly the MRJ90, but when it came up, it was theoretical.

“It’s very difficult to predict when and how Scope Clause will be relaxed,” Fukuhara said. “So, our strategy is we will give each customer maximum flexibility depending on the situation with the Scope Clause.”

An investor presentation by the company’s parent, Mitsubishi Heavy Industries, in May referred to the MRJ70 as the “core model for the North American market.”

The program’s US customers all have options to swap MRJ90s for MRJ70s. There has been considerable speculation among industry press about Trans States Holdings and SkyWest downsizing to the smaller version—or cancelling altogether. The two US buyers account for 150 of the MRJ’s 213 firm orders.

The MRJ70 has to go up against already established and larger competitors, Bombardier’s CRJ series and Embraer’s E170 and E175. Skywest fits 76 seats into most of the CRJ900s and E175s in its fleet. Likewise, the E175s operated by Trans States Holdings subsidiary Compass Airlines seat 76, the limit under existing Scope Clauses.

“We can compete with the CRJ700 or the E-175 or E175 special configuration with the MRJ70” on operating costs in the US market, Fukuhara said.

The company is accelerating development of the smaller MRJ, which is slated to deliver in mid-2021, executives said. Mitsubishi Aircraft also is looking at how to fit more seats in the MRJ70 and closing its capacity gap with the CRJ900 and E175.

The company expects to sell more than 1,000 MRJs over the life of the program, a number which Fukuhara called “conservative.” Overall, the company projects demand for 5,000 regional jets over the next 20 years.

When it finally delivers, the MRJ will be the only clean-sheet regional jet in Western markets. Direct competitors, the CRJ and E-Jets are both nearly 20-year-old platforms, and Embraer’s E2 jets are based on the earlier planes. The newest clean-sheet design with similar capacity to the MRJ90 is the Sukhoi Superjet 100, has not penetrated Western or Asian markets. (Comac’s ARJ21 is similar in size, but has not managed to gain airworthiness certification from the FAA or EASA.)

The MRJ will be the only regional jet with geared turbofan engines—Pratt & Whitney’s PW1200G—which promise to slash fuel costs compared to traditional engines. Geared turbofan (GTF) engines have also brought headaches for airlines waiting for Airbus A320neos. Significant teething problems with the new engine technology, which Pratt & Whitney has been developing for two decades, have required substantial rework and slowed A320neo deliveries. Those fixes have been rolled into the MRJ’s PW1200G engines, MRJ executives said.

Nonetheless, the MRJ has not won any new orders since 2016—a fact often noted in industry coverage of the program. Certainly, the myriad delays have factored into the dearth of sales.

4 Comments on “Delays over for MRJ program, execs insist”