END_OF_DOCUMENT_TOKEN_TO_BE_REPLACED

So far, there isn’t a discernible shift to Airbus, either, data shows.

END_OF_DOCUMENT_TOKEN_TO_BE_REPLACED

July 15, 2019, © Leeham News: There are 14 new and derivative aircraft scheduled for entry into service (EIS) through 2027. This rises to 16 if Boeing launches the New Midmarket Aircraft (NMA).

But there are plenty of uncertainties around precise EIS hanging over some of these. 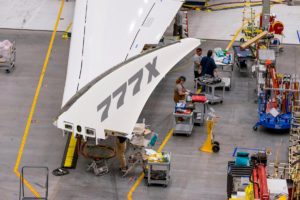 LNA sees entry into service for the Boeing 777X slipping to the first quarter of 2021.

LNA sees the Boeing 777X EIS slipping into early 2021. China’s C919 is now slated for a 2021 EIS, but development has been tricky and delays have been common. Russia’s MC-21 flight testing has been slow and international sanctions hang over this aircraft.

Mitsubishi’s MRJ90, now called the M90, is slated to enter service next year. It, too, has been plagued by delays. The redesigned MRJ70, the M100, moves from a 2021 EIS to a planned 2023 EIS—but given the MRJ90’s history of delays, the company has to persuade the industry no more slippages are likely.

Here is a rundown by year and aircraft of the EIS dates.

END_OF_DOCUMENT_TOKEN_TO_BE_REPLACED

In this preview, we will go over what to expect from commercial aircraft OEMs.

END_OF_DOCUMENT_TOKEN_TO_BE_REPLACED

Bombardier is exiting commercial aviation. The company already is under contract to sell the Q400. It’s CRJ program is for sale, or lacking any, inevitably headed for termination.

Embraer agreed to spin off its Commercial Aviation division into a new joint venture with Boeing. Its E-175 E2, designed with changes to the US Scope Clause in mind, is too heavy to comply with contract restrictions. The predecessor, the E-175 E1, is Scope-compliant but it also is aging technology.

Neither the Sukhoi SSJ100 nor the COMAC ARJ-21 are serious competitors.

Mitsubishi, beset by five of delays that pushed its MRJ90 seven years behind schedule, has been dismissed by most as too little, too late, too heavy and not Scope compliant.

Yet MITAC, as Mitsubishi Aircraft Corp  is known, has quietly reworked the MRJ into a Scope-compliant “concept” aircraft that will be revealed at the Paris Air Show next month.

Officials said the aircraft, the name for which hasn’t yet been revealed, will be the only new generation, Scope-compliant aircraft, positioning Mitsubishi to become a key player in the regional aircraft industry.

END_OF_DOCUMENT_TOKEN_TO_BE_REPLACED

Flight testing is slow and entry into service (EIS) is now targeted for 2021—a slip of five years from the original schedule.

The C919 launch-to-EIS is approaching the eight years record of the ARJ21.

END_OF_DOCUMENT_TOKEN_TO_BE_REPLACED

January 3, 2019, © Leeham News.: The last year was a quiet year for the airliner side of Irkut Corporation (Irkut). It continued testing its two MC-21 single-aisle airliners and rolled out the third test aircraft.

Behind the scenes, there were larger changes. Irkut was handed the shares of Sukhoi Civil Aircraft Company (SCAC), the designer and producer of the Superjet 100. The move is part of merging the Russian airliner industry into one company.

During 2018, United Aircraft Corporation (UAC), the parent of Irkut and SCAC, started the consolidation by moving all new airliner projects to Irkut, including the CR929 widebody project with China. The consolidation will continue 2019.