May 06, 2019, ©. Leeham News: Bombardier’s CEO, Alain Bellemare announced yesterday the company will streamline to a Train and Business jet company.

This means there is no longer place for a Commercial aircraft division nor its Aerostructures parts in Belfast and Morocco serving these aircraft. 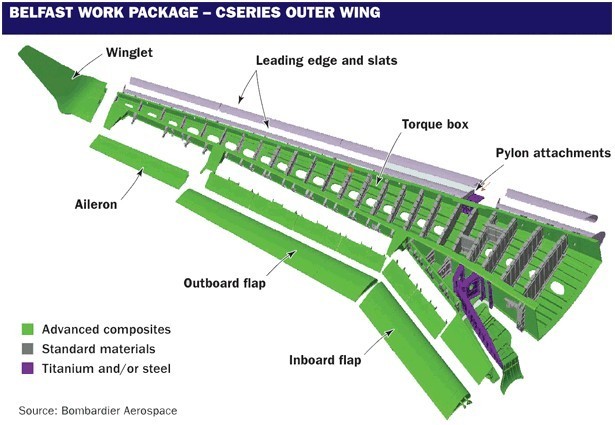 Bombardier is a debt-laden company. The CSeries development together with Global 7500 and Learjet 85 loaded Bombardier’s balance sheet with nine billion dollars in debt. There is since years a high priority to lower this debt level while focusing the company on Trains and Business Jets.

The Belfast facility’s key activity is doing wings for Airbus A220 aircraft. It also does nacelles and has won a future nacelle program for Airbus A320neo aircraft with Pratt & Whitney engines. Belfast also does fuselage sections for Bombardier’s Business Jets but this is of a lesser scale than the Airbus engagement.

The wing for the A220 is made with a unique Resin Transfer Injection (RTI) process which is ideally suited for manufacturing wing structures in the size and quantities needed for the A220 series.

It combines a manual dry Carbon fiber mat layup with an injection of the Epoxy resin when the fibers, laid on the wing skin’s female mold, have been bagged and placed in an Autoclave. The wing skins produced are then entering the autoclave a second time adding additional mat layers and the wing’s stringers. The additional parts are then co-cured to the wing skins. The result is CFRP wing skins of high quality produced at a very competitive cost level.

This technology is the Crown Jewel of the Belfast operation and Bombardier assumes it can get Airbus or one of Airbus aerostructures partners to pay top dollars to get hold of this asset. With Airbus expanding the reach of the A220, there is a long term future for the Belfast Carbon Fiber Reinforced Polymer (CFRP) wing technology.

I would think Airbus would like to restrict the technology to only Airbus projects. This would speak for an Airbus purchase of the asset. Why hasn’t then this happened already? Airbus and Bombardier are partners in the A220 program?

We must assume Bellmare wants more than Airbus has offered to pay. By opening up to competition he hopes more debt can be paid off by selling to the highest bidder.

Why is the Belfast wing process so interesting?

If acquired by one of the tier-one aerostructure players like Spirit Aerosystems or GKN, the technology could be used for other aircraft programs than Airbus A220.

The Belfast developed technology produces a composite wing to an attractive price with rather modest investments in tooling infrastructure. There is no need for Automated Fiber Placement (AFP) machines costing tens of millions dollars for laying down hundreds of layers of pre-impregnated tape (Prepreg), before cooking the lot in the autoclave to a wing skin or wing spar.

The Belfast process in manual in its layup of precut mats but tape laying of prepreg tape is also largely manual today. After each automated tape laying layer (and there are hundreds in a wing skin) the whole surface must be manually inspected and any faults corrected. It’s a process which takes as long as the laying of the tape for the layer. In the Belfast process, the persons laying down the mats do this inspection concurrently with extending the fiber cloth.

The Belfast process is the present lowest cost process for doing a CFRP wing of high quality. The Russian AeroComposit process with Resin Infusion of Dry Fiber which is cured in ovens promises even lower cost. But the lack of the compacting and gas evacuating high pressure of the autoclave makes the quality level and by it, the strength to weight ratio, an unknown.

Only Russia’s United Aircraft knows the answer and with western sanctions hitting its western sourced production materials, it will most likely be tight-lipped with how it’s Russian dry Carbon fibers and Epoxy resins perform.