Sept. 25, 2019, © Leeham News: As many as 135 Airbus and Boeing jets could be dumped on the market following the bankruptcies or cessation of operations of five airlines and a financially distressed sixth carrier that is a subsidiary of one of the bankrupt ones. 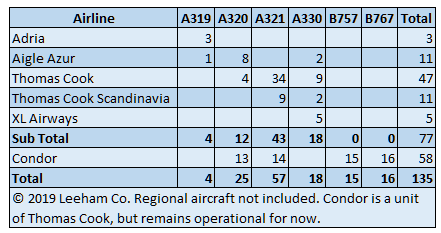 Condor maintained service for now and received an emergency loan of €380m loan from the German government. But its long-term survival may depend on acquisition by the Lufthansa Group.

Eighteen airlines globally ceased operations since the first of the year, but this past 10 days has been a European blood bath.

23 Comments on “European bloodbath dumps aircraft back into market”