Total losses were -$342m ($27m), whereof -$202 was non-operational charges. The COVID crisis hits commercial aircraft deliveries, but Embraer had no cancellation of E-Jet orders in the quarter.

The Executive jet segment is holding up comparatively well, as is Defense and Security.

The Embraer results for the second quarter were charged with $101m which was delayed amortization and depreciation which wasn’t performed for the carved out Commercial Aircraft operation during the Boeing Joint-Venture sales process.

A further $101m was on-time charges for expected losses due to COVID-19 and a change in the value of Embraer’s shares in Republic Airways.

To conserve cash, all company expenses are minimized, including investments in facilities (CAPEX) and Research and Development (R&D), Figure 1. 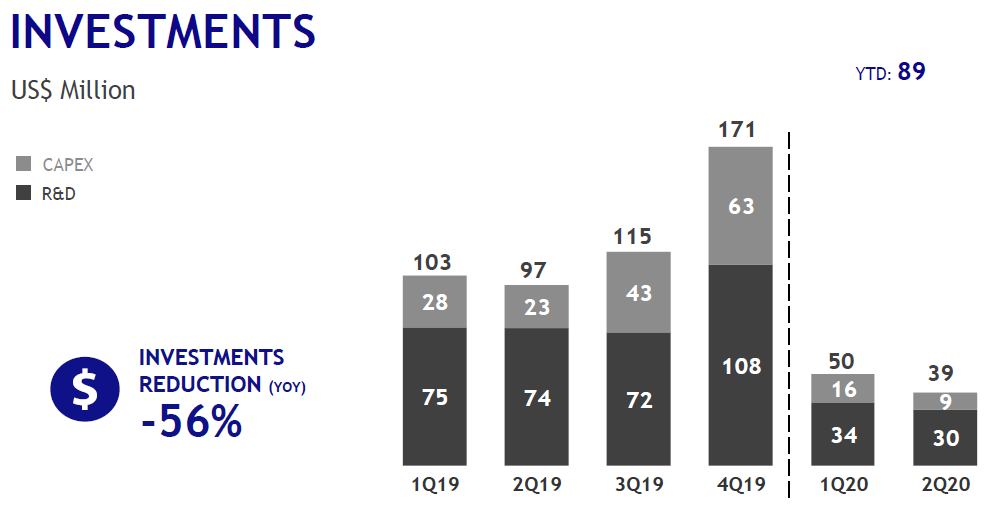 Debt is maturing the first time in 2022. Given the present crisis, no guidance is given for 2020.

The Commercial Aircraft division delivered four E-Jets during 2Q2020, of which two of the lastest E2 standard. This compares with 26 for 1Q2019, Figure 2.

Segment revenue of $109m shall be compared with $631m from the second quarter of last year.

Embraer is now slowing down the development of its E175-E2, with EIS planned for 2023 instead of 2022, as the US Scope clauses still render the aircraft to heavy for the US market. The present E175 (-E1) is now the only aircraft in production for the US segment.

Embraer points out that regional jets lead the recovery, with 90% of its US E-Jet fleet back in service during 2Q2020 versus 61% for the larger single-aisle segment.

The Executive jets are affected by COVID-19 but the margin richer larger jets are holding up better than the light jets, Figure 2.

Defense and Security delivered the third KC-390 airlifter to the Brazilian Air Force with a further one to be delivered later in the year.

Services revenue for 2Q2020 declined to $192m vs. $309m 2Q2019. The decline is due to COVID-19, causing the worldwide Embraer fleet to fly less and to customers deferring any services that are non-essential.