Bjorn’s Corner: The challenges of Hydrogen. Part 7. The fuel system.

September 4, 2020, ©. Leeham News: In our series on Hydrogen as an energy store for airliners we look at the rest of the fuel system after we looked at the hydrogen tanks over the last weeks.

The cryogenic state of the liquid hydrogen (cryogenic=very low temperatures, -253°C) creates some new challenges when designing the fuel system.

How to design the fuel system of a liquid hydrogen airliner?

The low temperature of LH2 forces some special solutions around the fuel system of an LH2 based airliner.

Tanks layouts with engine collector tanks and feeder storage tanks like today’s airliners have been analyzed in Airbus’ Cryoplane studies. It works if special care is given to tank form and its insulation to avoid heat leaks and the material choices and insulation of pipes, valves, pumps, and sensors are done carefully.

Special hydrogen leak detectors with appropriate ventilation are required for all areas where the fuel system is present.

The tanks are isolated low-pressure tanks as in Figure 2, with both LH2 (B) and H2 (A) insulated fuel pipes and a dedicated insulated LH2 filling line (D) to each feeder tank. The tank feeds the collector tank via the tank pump at E. 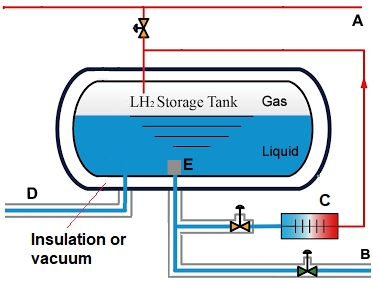 There is no specific problem having a central filling receptacle for the LH2, with LH2 flowing concurrently to each feeder tank.

There is long-time experience of cryogenic tanks, pipes, valves, pumps, and sensors from the Technical and Space industry. The Space experiences must be further developed to suit the longer storage times of the airliner application (typically a 12-hour case without excessive boil-off due to heat leakage).

The leakage gas at A, when needed to be supplemented with gas from the heat exchanger at C, can be routed to a hydrogen fuel cell providing the aircraft with electrical power, both when stationary and during flight, thus replacing the APU and the engine-driven electrical generators. With the appropriate development of the efficiency of such fuel cells, they can provide sufficient electrical power to feed a more electric aircraft architecture.

With electrically driven De-Icing, Environmental Control System (ECS=Air Condition System), hydraulic pumps, and engine starters, the aircraft can gain efficiency by not tapping this power from the Turbofan engines or an APU.

The Turbofans can be optimized for delivering propulsive power, where the LH2 is supplied to the combustor injectors at the appropriate temperature via a heat exchanger in the engine pylon.

In the next Corner, we will explain why we use LH2 based Turbofans as propulsors for an A320/737 class of aircraft, instead of fuel cell-driven electrical propulsors as outlined in the EU study.

← Airbus integrates the last pieces of the CSeries from Bombardier
Pontifications: Boeing in Washington: Here We Go Again →

22 Comments on “Bjorn’s Corner: The challenges of Hydrogen. Part 7. The fuel system.”