A radar altimeter is a vital part of many warning and flight controls systems on our airliners, with the perhaps most critical the ILS CAT II and III blind landing systems. Then, the undisturbed knowledge of where the aircraft is in the final approach and landing is vital for changes in the Autoland function, such as switching from one mode to another.

FAA writes in its Continued Airworthiness Notification from four days ago that Boeing has warned its customers that the switch from AIR to GROUND mode in its 787 series Autoland during late approach can be affected, with runway excursions as a result if spoilers and thrust reversers don’t deploy correctly.

The conflict between the FCC with the telecoms industry and FAA and the airline industry started in 2020 when the FCC decided that the sparely used 3,7 to 4.2 GHz band would be reallocated to telecom use and subsequently auctioned the 3.7 to 3.98 GHz band to 5G use in the US.

It’s only 202 MHz from the Worldwide 4.2 to 4.4 GHz Radar Altimeter band. After lengthy discussions, the RTCA (Radio Technical Commission for Aeronautics) did tests in 2020 that showed the interference risk is real, not only for airliners but also for business jets, general aviation aircraft, and helicopters (Figure 1).

The FCC and telecoms industry argues that a 202 MHz spacing should be enough, but the Worldwide specifications for Radar Altimeters did not prescribe these should be unaffected by such emissions. There was no risk for interference of this kind in the vicinity of airport approach paths before the 5G use of the adjacent band.

With Telecom Cell networks, this changes as the base stations are everywhere. RTCA used the O’Hare 27L approach to showcase the problem (Figure 2). 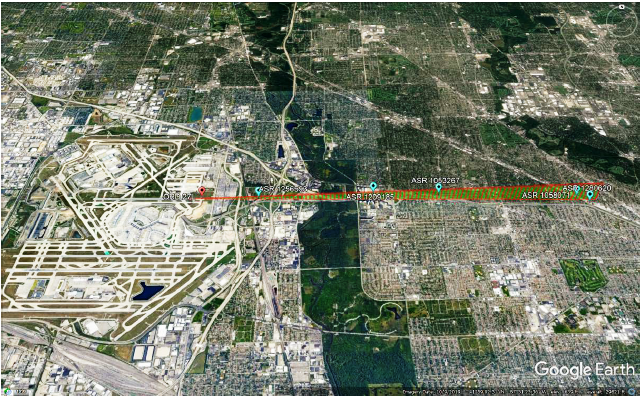 There are five 4G base stations in the approach path, and should these be upgraded with 5G, the Radar Altimeters of landing aircraft can be disturbed. If the Pilots fly with near-zero visibility (ILS CAT III) any system disturbance is critical, especially if the Autoland function is disturbed.

How can this happen

Since the FCC decision, FAA and the FCC have argued the issue, with FCC and the wireless industry arguing there have been no problems in other countries. For Europe, this is because the frequency separation is three times the US at 600MHz (5G stops at 3.6GHz). FAA and the airline industry argue air safety is not about “it hasn’t been a problem elsewhere “, only extensive verification and tests can decide if it’s safe or not.

The fight had the US Transport Secretary Buttigieg sending a letter to Verizon and ATT CEO’s end of December, outlining a delay to January 19 of the general rollout of 4 GHz 5G in the US and to the end of March for FAA identified sensitive airports, so that FAA and the airline industry can verify what is safe and not.

The problem is not confined to US Airlines

With US, North and South American, and the rest of the World’s airliners coming to land in US airports, the problem spans a large part of the 25,000 airlines in the World. An approach “you must fix your Radar Altimeters and connected systems “ is therefore not workable.

What must be done is a limit on the 5G rollout around airport approach paths and extensive tests with all the in-market used Radar Altimeters, old as new, and this takes time. Only then can the industry decide on the gravity of the problem and the possible fixes.

Bad weather landings on affected airports and non cleared airliners will be forbidden until then.