Jan. 24, 2022, © Leeham News: Lockheed Martin (LMCO) is expected to announce as early as this month where it will assemble its LMXT aerial refueling tanker should it win the US Air Force’s KC-Y contract. Lockheed’s 2021 earnings call is tomorrow, Jan. 25, but it’s unclear if an 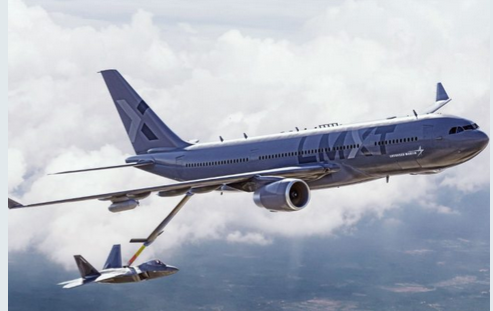 announcement will be made on the call.

The top contenders appear to be the Airbus final assembly complex in Mobile (AL), or Lockheed’s own facilities in Marietta (GA). Others may be in the mix.

In an interview with LNA Thursday, Larry Gallogly, the director of the LMXT campaign, said an announcement will be made “toward the end of this month.”

LMCO will compete for the US Air Force’s KC-Y Bridge Tanker contract. The Request for Proposals is expected to be issued this year. Boeing will offer its KC-46A tanker. The KC-46A fulfills the KC-X contract won by Boeing in 2011.

Assembled in US by US workers

In the KC-X contract competition, the team of Northrop Grumman and EADS (the name of the Airbus parent at the time) won the contract. Boeing protested for procedural reasons. The Government Accountability Office (GAO) upheld the protest. The competition was re-run, this time without Northop, which withdrew. EADS bid anyway and this time, Boeing won.

In both competitions, EADS pledged to assemble the A330 tanker in Mobile (AL). Since losing in 2011, Airbus constructed an A320 final assembly line and, more recently, an A220 FAL.

Lockheed pledges to assemble and modify the LMXT in the USA.

“We have a transition plan that will move these operations from their current locations to the US,” Gallogly says. “We have built those transition plans to ensure that we can train all of our US workforce under the current production processes that are that are being utilized and then we can move those to the US and ensure that for the customer this airplane works right out of the box.”

Where the tanker will be assembled if LMCO wins the KC-Y contract is of great interest to the Mobile area. With two Airbus FALs at the former Brookley Air Force Base in Mobile, which is being converted to the downtown commercial airport, adding a tanker FAL builds the growing aerospace cluster there. A new building may be required.

LMCO has empty space at its Marietta (GA) facility that could be used to house the FAL. But Gallogly said last week that Mobile isn’t necessarily out of contention.

“There will be some late-breaking news that I think will come out toward the end of this month that will give you a little more fidelity on where we will do things,” he said. “We’re in those final considerations, both where the physical facilities will be located, what makes the most sense, trying to keep it efficient for the US government, not having to recreate the wheel or build all these new buildings. We’re trying to take advantage of what’s already available in the United States and keep this aircraft as affordable as possible for the taxpayers.”

The workforce is also a consideration.

“When you think about existing facilities, you should also think about trained workforce, to take advantage of a workforce that’s already trained to do some of the work,” he said. “I wouldn’t count Mobile out. I certainly wouldn’t count Marietta out. We do have some excess space there. We hope to have those formal announcements at the end of this month.”

LMCO will bring over tooling from the 330 line to produce the LMXT in the US. Airbus confirmed that the A330 passenger FAL will remain in Toulouse, France.

“You’ll have assembly lines in both locations,” Gallogly said. “What we’re committing to is we will have to duplicate tooling of the A330. We’ll have a full assembly line of manufacturing facilities set up in the United States as well as a conversion center to convert the A330 into its final military configuration of a tanker.”

Details about the KC-X competition are part of a series on LNA that began Dec. 6 and continues through February on Mondays.

← Pontifications: A retrospective of the KC-X refueling tanker competition from Boeing’s perspective
Putting some reality into ecoAviation: steps *backwards* →