While a plethora of new entrants are nipping at the heels of Airbus and Boeing in the single-aisle market, the battle in the twin-aisle segment is strictly between the two behemoths.

Given their methodology differences in the total market forecast, both nonetheless come to the same market share—24%–of the mid-size, twin-aisle segment.

There remains a great deal of uncertainty and ambiguity over the future of the product development. Here is a run-down for the programs.

Boeing’s twin-aisle strategy suffered a major setback with the program issues surrounding the 787. This airplane was, of course, supposed to enter service in May 2008 to replace the 767 and the A330. Had Boeing done so, Airbus would have been put at a disadvantage for a decade. The plan had been to do the 787, followed by a replacement for the 737 and then a replacement for the 777. All this is out the window.

The 787 delays allowed Airbus the time to vastly improve the A330 and gain sales and market share from disappointed 787 customers. As Airbus is fond of pointing out, it has sold more A330s since the launch of the 787 than it did before. The A330-200 is now a 7,250nm airplane—exceeding, it claims, the range of the early, over-weight, under-performing 787-8s. The A330-300 is now a 6,000nm airplane, a whopping improvement over the first generation. Further improvements are expected to be announced at the Farnborough Air Show.

But Boeing still is the market leader in one category, the 777-300ER.

There is no question that this airplane figuratively and literally stands alone in its market. Airbus competed with the A340-500/600 and it was an uneven contest. These Airbus sub-types never lived up to expectations for fuel consumption and the highly efficient -300ER drove them out of the market. Even Airbus’ John Leahy acknowledges this. But that doesn’t stop Leahy from having the -300ER in a direct bulls eye for the A350-1000 (see below). In the meantime, the -300ER has its trade space all to itself.

Boeing has undertaken a major campaign to cast doubts about the A350-1000, recently taking up the story line that there hasn’t been a sale of this airplane since 2008 when George W. Bush was president. Airbus has a response to this, which we related under the A350 section. But the point is made. Having done so, Boeing is not resting on the laurels of the 777-300ER, and this is where the 777X studies come in. Boeing is considering two models: the -8X and the -9X. The -8X is nearly the size of the -300ER: about 350 passengers vs 365. The 9X is an entirely new category. At 407 passengers in the current concept, this is slightly over the threshold of the Very Large Airplane category as defined by Boeing and Airbus: more than 400 passengers. It’s as large as the 747-400. The concept calls for new engines, a new, composite wing and wing box, new interior sidewalls that will allow a slightly wider cabin and slightly more room in the aisles or seats.

But it’s not at all clear Boeing will proceed with the 777X even though that’s all they’ve been talking about publicly. We learned some weeks ago that it’s entirely possible Boeing may do little more than undertake engine and aerodynamic improvements on the -300ER. One fleet manager told us he believes that if Boeing proceeds with the 787-10, as is believed to be a certainty, then he doesn’t think Boeing will have the engineering and related resources available to undertake a major makeover of the 777 into the X program.

Aspire Aviation, a consultancy in Hong Kong, has its own recent analysis of the twin-aisle market. Contained within it is a discussion of the prospective 777X and the 777-300ER+ as noted above.

At long last, the 787-8 has been delivered—but only 13 were delivered through June 30 since the first one last September, 10 months ago. It’s taking an average of 10 months per airplane to do the rework required, according to an analysis by UBS Securities.

The 13 are all heavy airplanes with early engine packages that didn’t meet original specifications. But launch customer All Nippon Airways said the airplane is still 21% better on fuel consumption on a per-seat basis than the Boeing 767-300ERs the 787 is replacing. This is good news for Boeing. 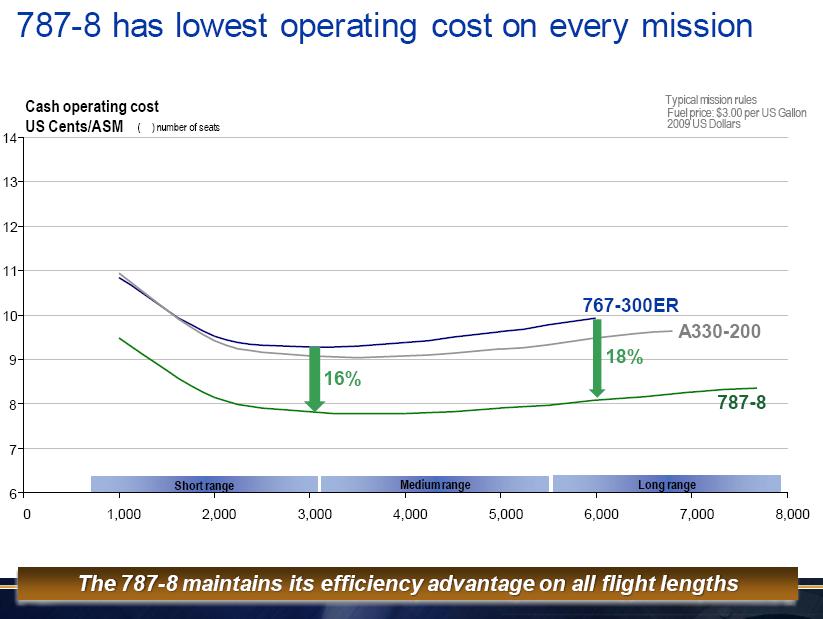 Meantime, engineers are working on the final design for the 787-9 and working up the preliminary specifications for the 787-10.

Although Boeing talks about the 787-10 and the 777X as though these are fait accompli, neither is a “go.” Jim Albaugh, former CEO of Boeing Commercial Airplanes, said the 787-10 would be the airplane to get a go-ahead first.  Boeing’s reception by customers toward the -10 has been superb, said Nicole Piasecki, Boeing vice president of Business Development and Strategic Integration, during the pre-Farnborough Air Show media briefing.

It’s widely assumed that this sub-type will be launched this year (though not at the Air Show). As noted above, one fleet manager believes Boeing won’t have the resources to undertake a 787-10 and a 777X, relegating the latter to Performance Improvement Programs on the 777-300ER.

What happens with the A350-1000 will nonetheless be a driver.

This program is now largely reduced to being a freighter.

Airbus had its own tumult in the twin-aisle arena. The company first dismissed the 787 as another of Boeing’s fantasy airplanes and failed to recognize the threat and promise of the composite aircraft.

Then Airbus responded in an embarrassing display of an A350 that was nothing more than a re-winged, re-engined A300. This “Version 1” was roundly dismissed by the market.

The embarrassing display continued through Versions 2-5 before settling on the A350 XWB, and even now the -800 and -1000 seem to raise more questions than they answer.

AirInsight has a comprehensive look at the A330 program. We have little to add here, except this:

Airbus claims the lower-cost (in terms of capital cost and lease rates) and greater passenger and cargo capacity keeps the A330s competitive with the 787-8 and 787-9. Since the 787-10 specifications haven’t been identified yet, Airbus hasn’t made a comparison with this sub-type.

A further improvement of the A330-300 is likely to be announced at the Air Show. Engine PIPs are a certainty. Whether sharklets will be added remains to be seen. Since a Bloomberg article suggests another 400nm range will be forthcoming through an MTOW increase, this suggests sharklets may not yet be part of the package. 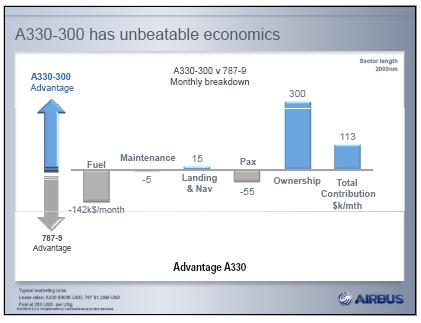 Engine PIPs will improve fuel burn by 1%-2%. Sharklets would further reduce fuel burn by 4%-5%, for a total reduction of 6%-7% if combined with the engine PIPs. This seems like a no-brainer. So why not?

The answer is that with a 6%-7% reduction in fuel burn—and the fact one could buy the airplane for 25% less than an A350-800—this pretty much would destroy the business case for the -800.

Market talk, encouraged by Boeing but hardly a Boeing exclusive, raises lots of doubts whether the -800 has a future. At the Airbus Innovation Days in May, John Leahy and the A350 program chief didn’t even mention the -800 in their presentations.

It does make you wonder.

One source familiar with the situation tells us Airbus doesn’t have to make a decision on the -800’s future for another year.

The A350-900 will, by all accounts, be a very good airplane. But nobody we talk to (except for Airbus itself) believes EIS will be in mid-2014 as advertised. Another delay of at least five months and perhaps somewhat more is considered highly likely.

As for the A350-1000, Boeing has had a very effective public relations campaign to sow doubts about this model. Launch customer Tim Clark of Emirates Airlines has been very vocal in saying the airplane doesn’t do what he wants—which is Dubai to Los Angeles non-stop, with more passengers and cargo. Launch customer Akbar Al-Baker of Qatar Airways, who has Tim Clark-envy, has chimed in, though his motivations are somewhat more of a mystery. Qatar doesn’t have any routes that the -1000 cannot do, in contrast to Emirates. There is a large industry suspicion that Al Baker likes to hear himself talk. 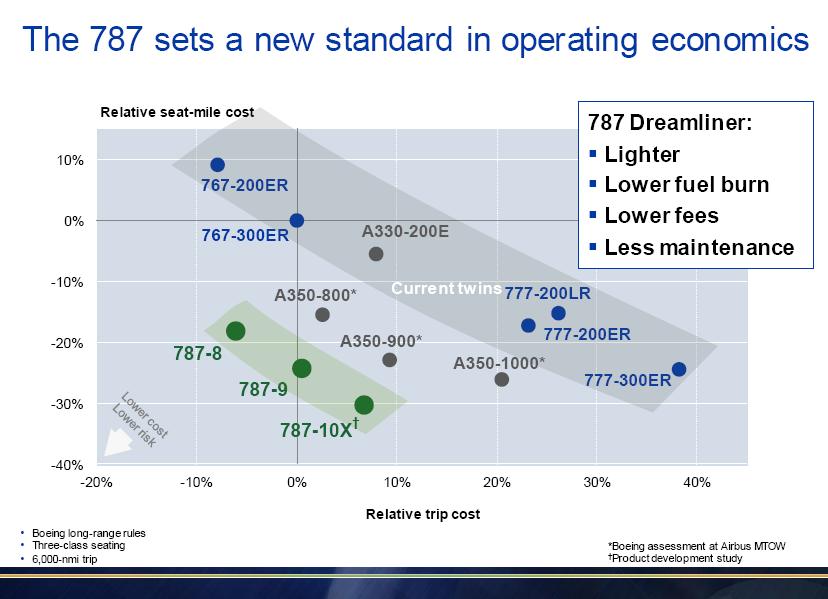 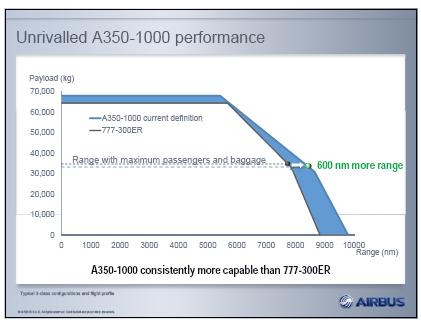 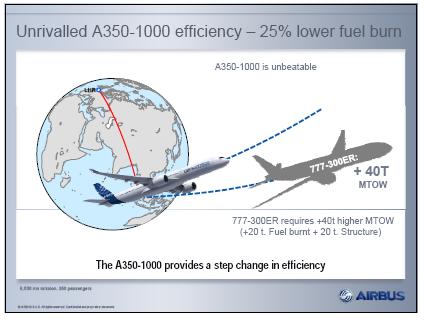 Airbus’ Leahy, when asked at Innovation Days about the lack of sales for the -800 and -1000 since 2008, responds that he has no delivery positions until after 2017/18 and airlines don’t want to pay escalation costs this far out.

There is certainly some truth to this, as confirmed by a purchaser of Airbus and Boeing planes (but not, as yet, of the A350). But we don’t think this is the whole story.

When it comes to the -1000 vs the 777X, one observer close to both companies says each is waiting to see what the other will do before deciding what to do about their own airplane.

The next 12-18 months will be very interesting to see how the chess game plays out.

Readers noted in a previous post that Boeing uses different seat assumptions for the A350 than does Airbus. This seat-count game has been going on for years. Boeing likes to reduce the seat count for Airbus, and vice versa. Airbus now shows the A350 with 369 seats vs the 350 it used to use. When asked, Airbus said this reflects a two-class configuration rather than three class.

Way back during the seat-count game (which continues) over the 747-8I vs the A380, we thought then (as we do now) that the entire process was silly. Airlines choose their configurations, so figuring costs as Airbus and Boeing do on a per-seat basis for public consumption is somewhat absurd.

During the 748-A380 debate, we decided to do some computations based on exit-limited capacity to determine per-seat costs, weight-per-seat, etc. (A380 won.) We think this should be done on all airplanes.

But the public relations game really doesn’t matter. The airlines perform their own analysis and theirs is the only one that counts.

It is because of the above, and for other reasons, we often show our skepticism of the data advanced by Airbus and Boeing.

29 Comments on “The mid-size, twin-aisle battle”