Boeing B-17: Here is 3 minute video about the iconic bomber, including footage inside the airplane. 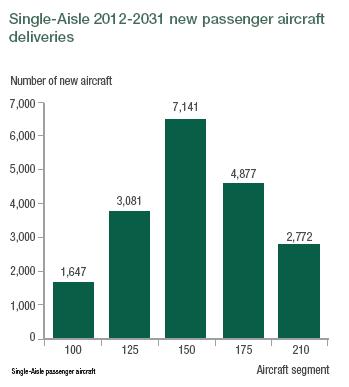 The 100-210 seat single aisle forecast is to the left. Click on the graphic to enlarge it for more crisp viewing.

The controversial 100-149 seat segment has been reduced in Airbus’ forecast from 5,115 to 4,708, an 8% reduction. The total market remains very close to last year’s forecast, at 19,498. Boeing forecasts more than 23,000 for this entire segment, a sharp difference between the two companies.

Airbus forecasts a need for 1,330 Very Large Aircraft (plus another 400 freighters). This is slightly more than last year and compares with Boeing’s forecast of 740 VLAs.