SPEEA v Boeing: The Seattle Times reported that there is a very high chance of a strike by SPEEA against Boeing come February. This is, of course, bad news for all concerned.

SPEEA is already talking about a 60 day strike and says this would cost Boeing $400m a day. In 2000, when SPEEA struck for 60 days, Boeing deivered 50 fewer aircraft for the year. IAM 751’s 57 day strike in 2009 depressed sales and cost Boeing billions (though nothing like the $400m SPEEA forecasts, which is a puzzle).

Customers, who were ticked off by the IAM strike, will once again be the innocent bystanders in this potential strike. A strike will also redouble Boeing’s drive to diversify to non-union states, though hopefully this time it won’t be so stupid as to connect the dots again as it did with the 751. It’s our belief Boeing can’t fulfill the demand for engineers in Washington State anyway so it has to locate work elsewhere. Although as a Washington State resident we don’t want to see this happen, this is, we believe, reality.

SPEEA has the power to truly disrupt things at Boeing, not only for deliveries but also for future engineering projects, but nobody will win and everybody will lose if Boeing and SPEEA don’t reach an agreement.

CFM LEAP Update: The Seattle Times also has this update on the CFM LEAP-1B, the version for the Boeing 737 MAX.

Noteworthy in the article is the revelation of the contractual commitment for CFM to reduce fuel burn for the LEAP-1B by 15% compared with today’s 737 CFM engine. This is a key piece of information and well beyond the Airbus assumption in the continuing war of words between the two companies.

It also is key to Boeing’s previously advertised target of the 737 MAX being 13% better than today’s 737NG. What strikes us, however, is whether 13% is still an operative figure.

All other things being equal, installation typically costs 1%-2%, which means the MAX on engine installation alone should be 13%-14% better than the NG. We know that Boeing is working hard on airframe improvements. Shouldn’t the 13% actually be better? We know the advanced winglets are supposed to add 1.5% to fuel reduction, for example. Boeing has also cleaned up the tailcone and undertaken other aerodynamic improvements.

We’ve asked Boeing and will post its response when received.

Update, 2pm PST: We have an answer of sorts from Boeing, though we’ve asked for further clarification.

“CFM’s number is in SFC or specific fuel consumption for a given thrust which when you apply it to a specific mission gives you the fuel-burn reduction for that trip. The attached shows a 500-nmi trip comparison which gives the MAX engine 14% fuel-burn reduction compared to the NG engine, next we factor in engine integration and aero improvements ending up with a total 13% reduction for a 500-nmi trip compared to the NG).

“You will see in the chart that we credit the AT winglet with approximately 1 percent improvement (again this is at a 500-nmi trip). However, at longer ranges customers will experience even more improvement from the AT winglets, up to 1.5%.” 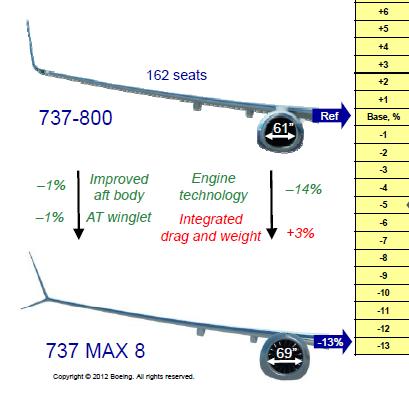 This chart (click to enlarge) is extracted from Boeing’s Farnborough presentation. It starts with a 14% improvement for the engine, while the news article says 15% is required in the CFM contract. The Boeing spokesperson said this is for a 500nm mission at a “specific thrust” level. We’re trying to clarify the difference between the 15% contract number and the 14% above. If we get this clarity, we’ll update again.

“CFM’s number is in pure SFC and our numbers are in fuel-burn per trip so they are not equivalent. It’s like comparing apples to oranges. In our case – we are using a 500-nmi trip which is our standard comparison. This includes then in our calculations the fuel-burn cost of lifting the airplane empty weight off the ground since takeoff is part of the trip. CFM’s number is an engine in a test stand compared to another engine in a test stand so the two comparisons are not equivalent.”

Not revealed in the article but we learned that there will be a thrust bump for the LEAP engine. Right now CFM lists on its website the LEAP-1B thrust at a maximum of 28,000 lbs, the same as the current engine. Because of the higher weights for the MAX, runway performance has been assessed as poorer than the NG by customers we’ve talked with. A thrust bump, and airframe improvements, are aimed at fixing this issue, we’re told.