The Space Shuttle: As the world knows, the US discontinued the Space Shuttle program. The shuttles were highly sought by museums throughout the country, including by Seattle’s Museum of Flight. The Museum lost out on receiving one of the Shuttles but it received the trainer, a full-size replica of the Shuttle on which astronauts trained prior to going into the real thing. Seattle was disappointed in not receiving a space shuttle, but frankly we think the Museum–and enthusiasts who visit the Museum–got the better deal.

The real Shuttles, and the prototype Enterprise, are on display but access is restricted. Nobody can get inside one of these. On the other hand, the Museum of Flight offers tours into the crew compartment and cockpit (for a fee) and anyone who purchase admission to the general Museum can get into the cargo bay.

We went to see this last weekend. We’d previously seen the Enterprise at the Steven Udvar-Hazy Museum at Washington Dulles Airport and couldn’t get very close to it. As impressive as it was to see this ship, being able to go into the crew compartment, cockpit and cargo bay of the trainer was much more 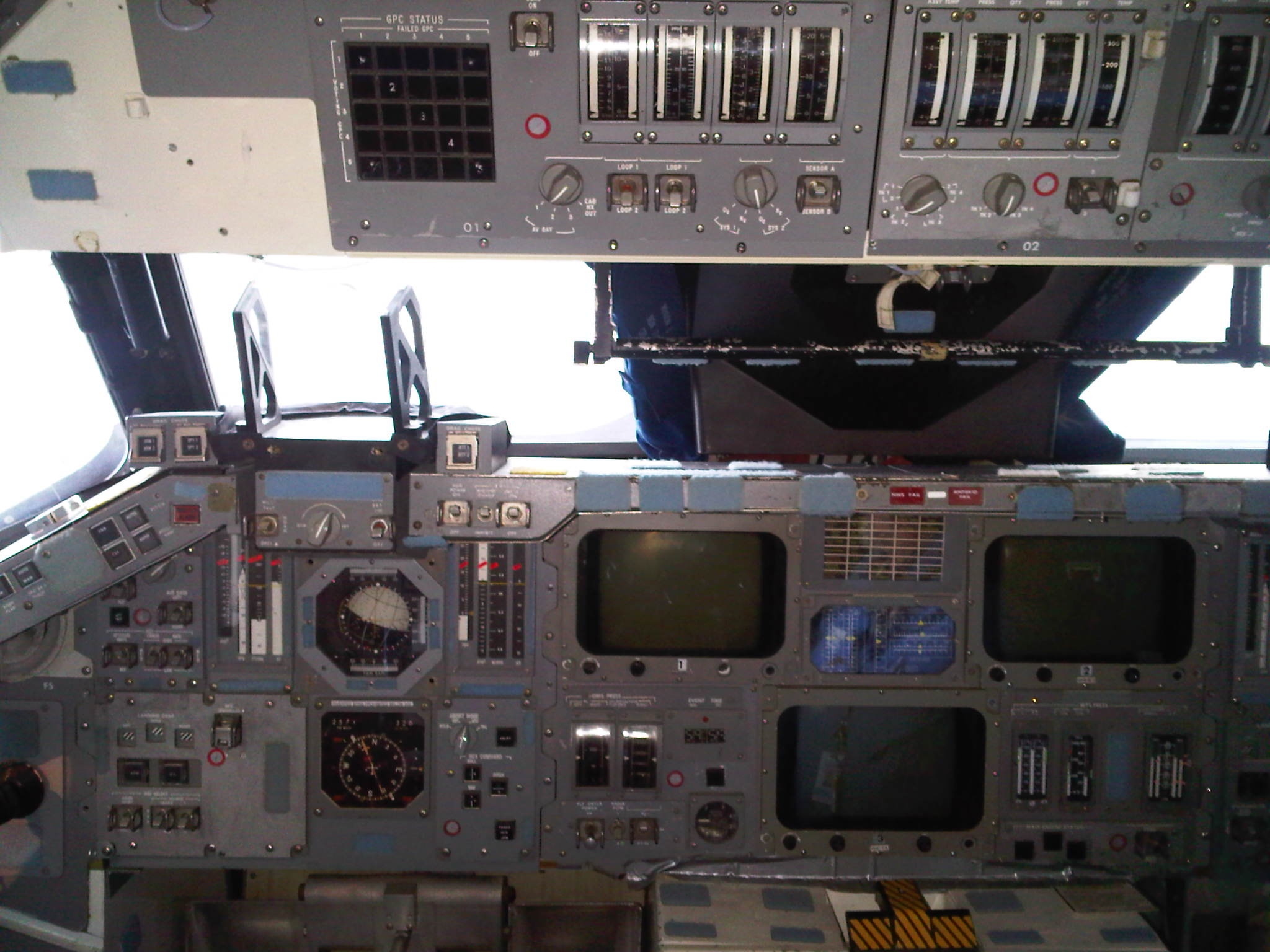 The Shuttle was designed in the 1970s, so as you might expect, the cockpit was fundamentally technology of that era. Upgrades occurred throughout the program, but compared with the modern cockpits of today’s airplanes, the contrast is stark.

The cockpit area is cramped, as is the crew compartment on the deck immediately below. This compartment is about 200 sf. In weightless space, the crew can double-up, floating in the upper area and sleeping in the cots.

The space potty is in a corner of this compartment, and you can’t be modest. There is no door (but there is a curtain). NASA produced this video telling how you hit the head in space.

The cargo bay is both bigger and smaller than you might think. On TV or in photos, there simply is no sense of size. Being able to walk into the cargo bay finally gives you the appreciation of how much–or how little–the Shuttle could carry. We once read the Shuttle is roughly the size of the DC-9, so this gives readers a point of reference. Entry to the cargo bay from the crew compartment is through a series of air lock doors. The diameter is only a few feet. 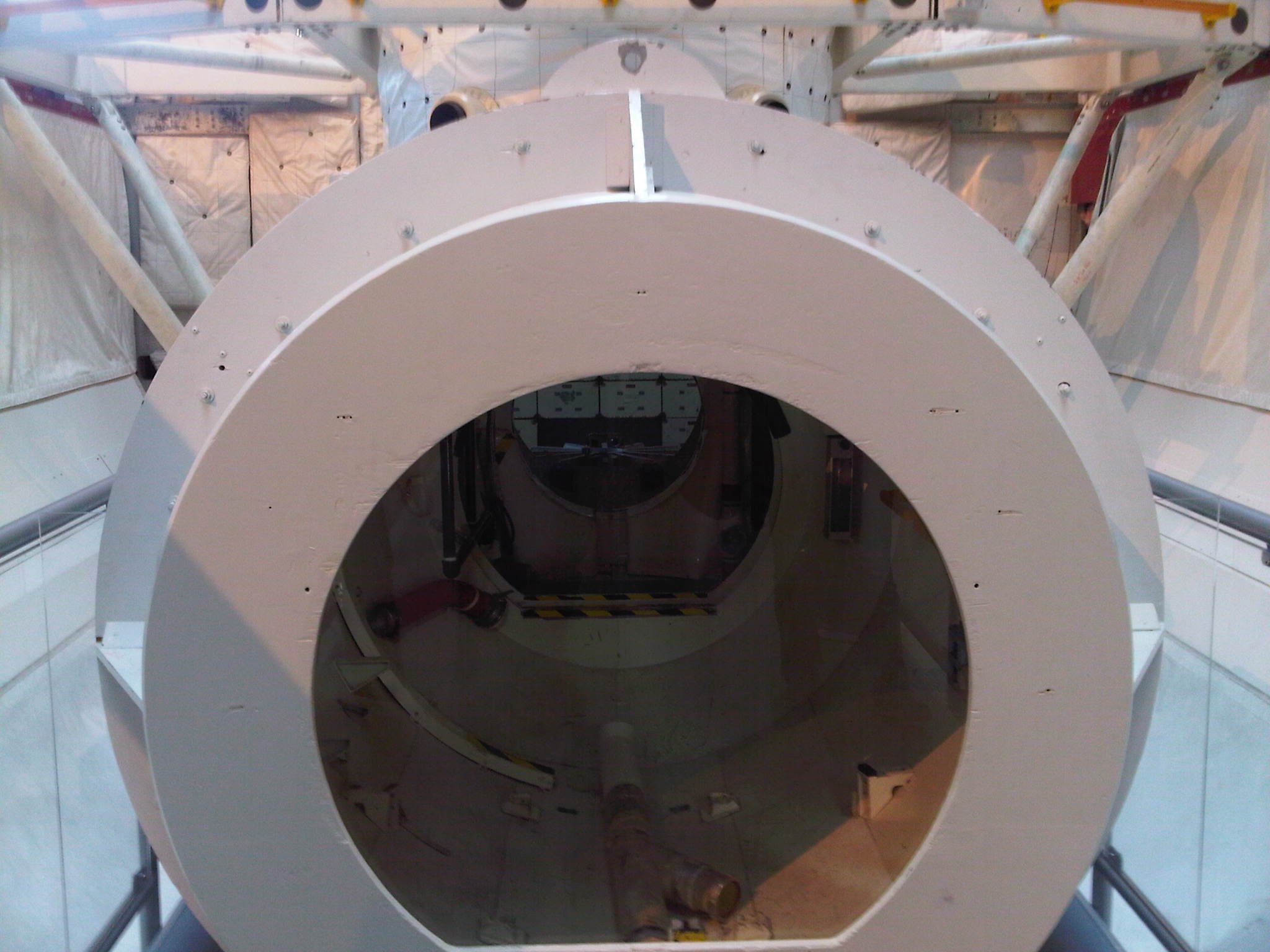 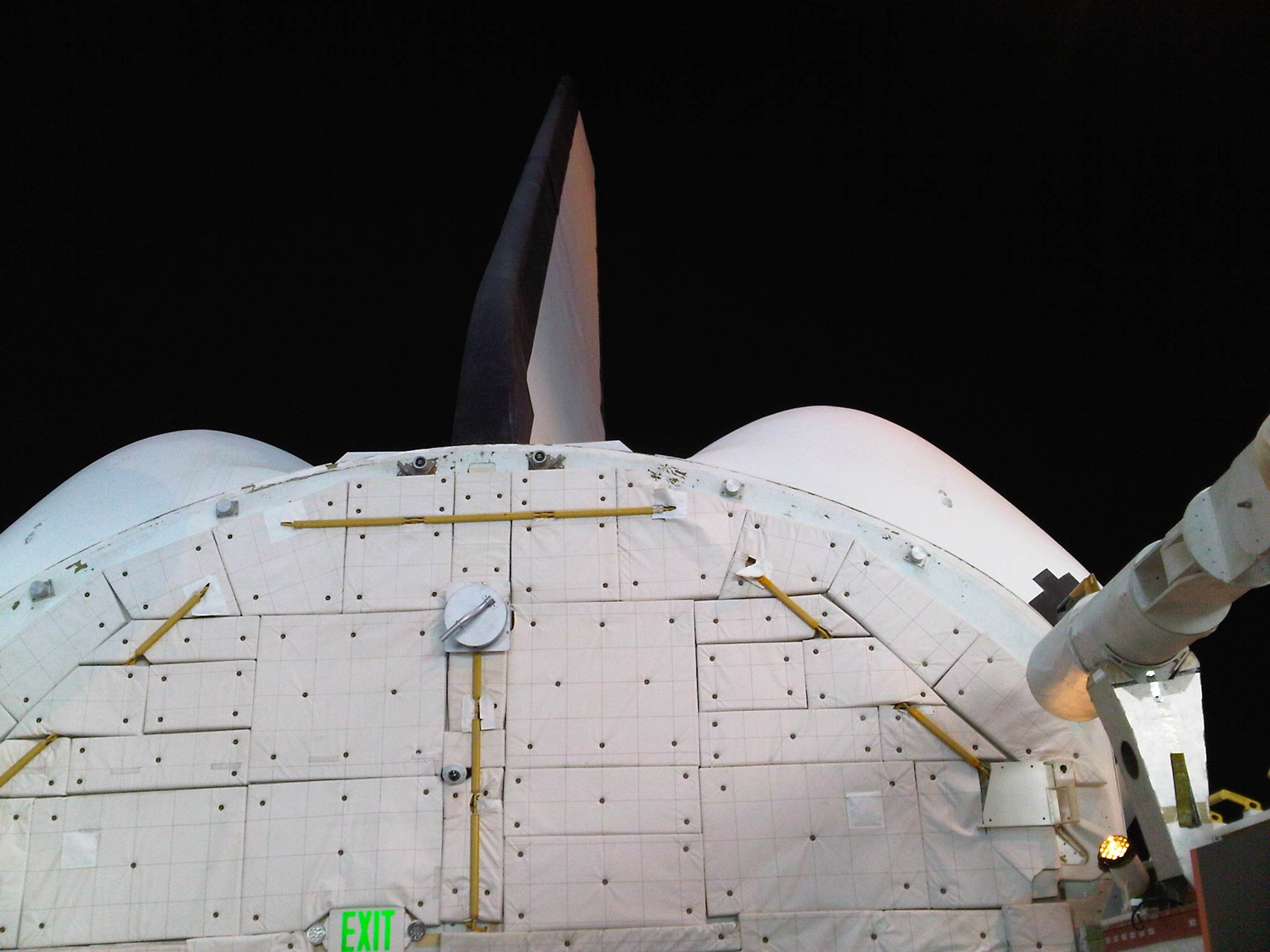 The photo above is from within the cargo bay (Exit sign added by local requirements–not part of the Shuttle….). In space, the Shuttle flies upside down with the heat shields facing the sun. The photo below shows the open cargo bay door (port side) and a replica piece of cargo. 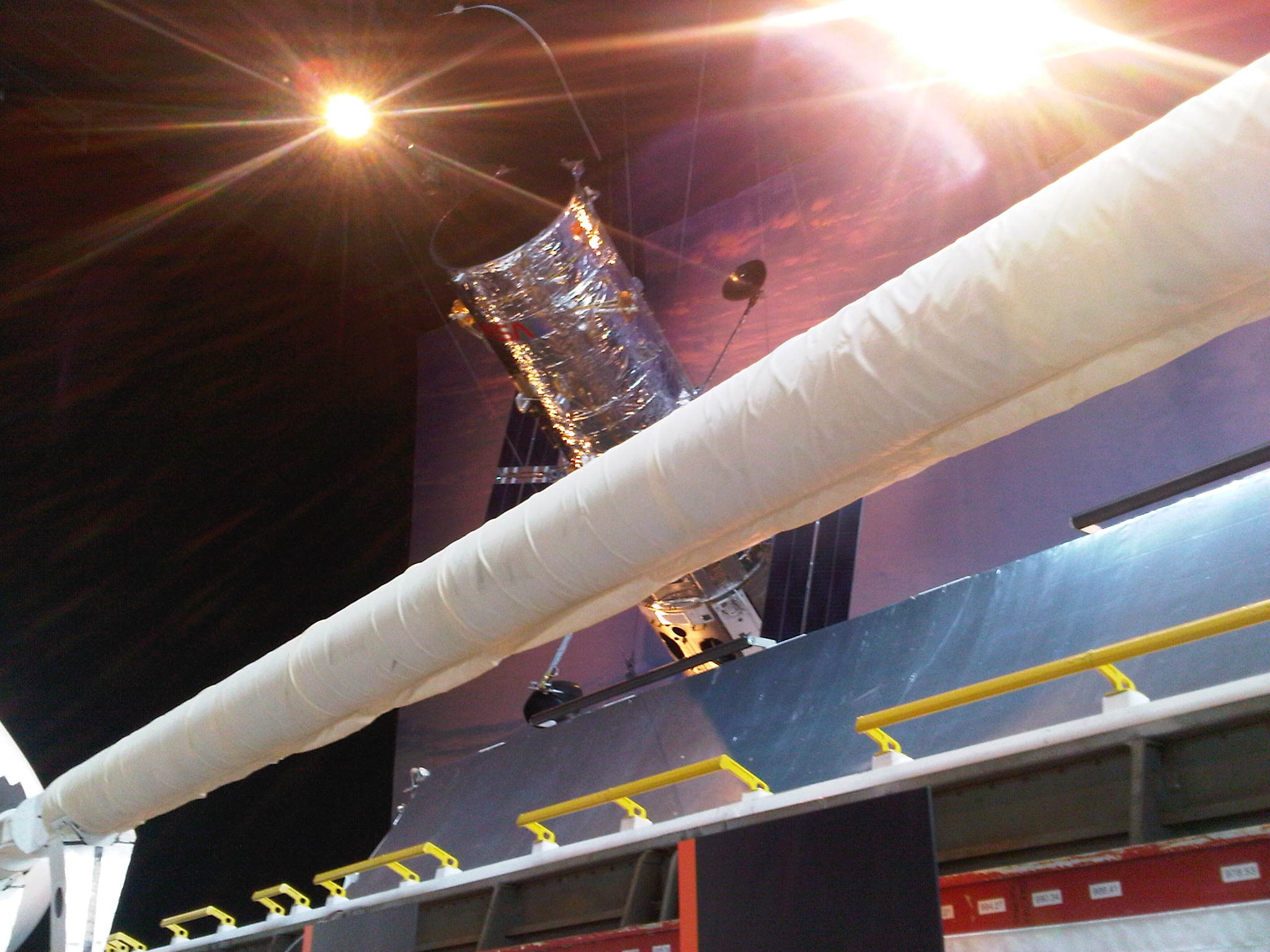 The photo below is a replica of a booster engine to thrust cargo much higher into orbit than the Shuttle can go. It was built by Boeing. 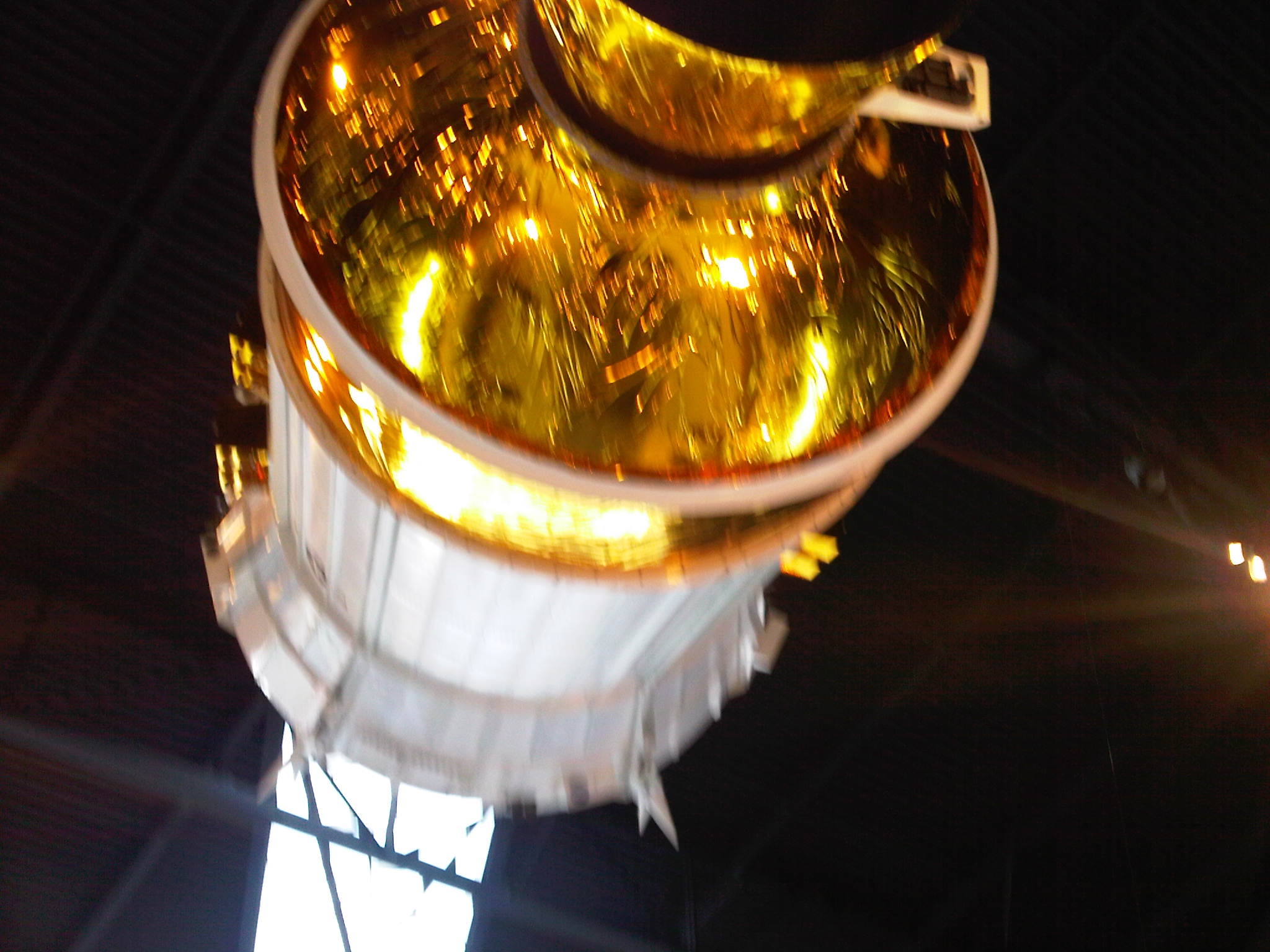 Porter’s Community Challenge: The Toronto Star has this article detailing the challenge Porter Airlines has with public opinion following announcement last week of its ambitious plan to acquire up to 30 Bombardier CS100s and expand service from the highly restricted Toronto City Centre Airport. Aviation Week takes this analytical look at the plans. Notable in the report is that the CSeries order will lapse if restrictions aren’t lifted by year-end.