Sequence of Events of MH370 and the probabilities

The mystery of Malaysian Airlines Flight MH370 continues, as the search area today shifted nearly 700 miles to the northeast following continued analysis of known data of the flight.

Investigative focus also is on the pilot of the flight, while others continue to support mechanical, fire or depressurization theories.

We felt from the second day this was a criminal act of some kind, not some issue with the airplane. The information, we felt, clearly pointed to movements of the airplane as a result of someone in command control of the Boeing 777.

We put together this sequence of events that, to us and apparently also to investigators, that we believe points to no other explanation but human intervention. 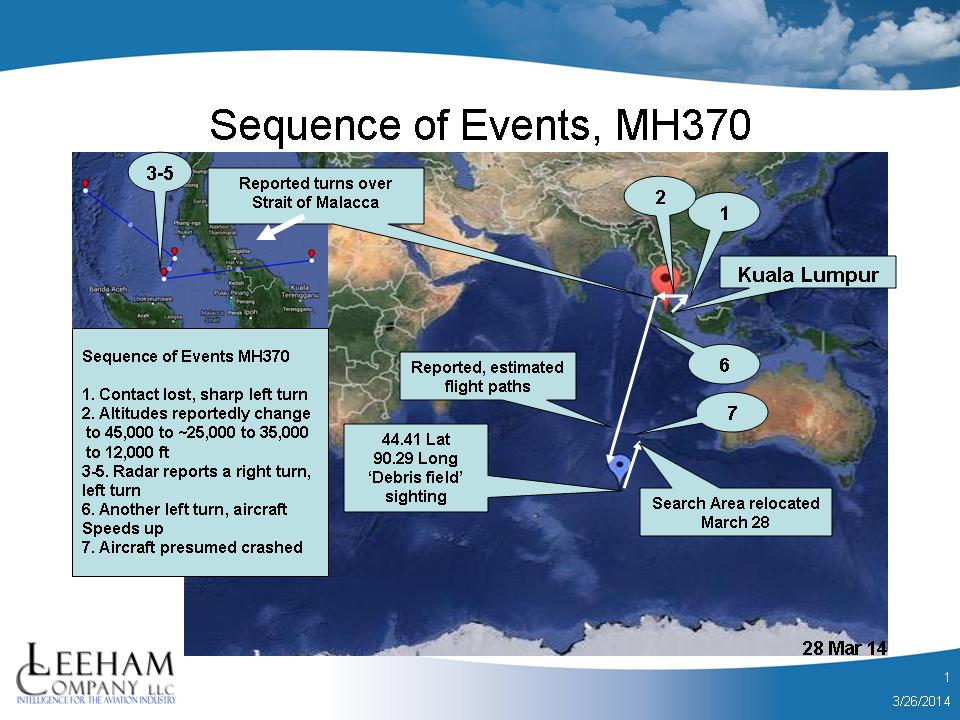 Part of accident investigation is not only to determine what did happen, but also what did not. Sir Arthur Conan Doyle’s famed fictional detective Sherlock Holmes said, “when you have eliminated the impossible, whatever remains, however improbable, must be the truth.” (For those who suggest supernatural causes are responsible for the disappearance of MH370, Mr. Spock from Star Trek also said this in Undiscovered Country.)

As we considered the possibilities, we couldn’t “eliminate the impossible” but we did eliminate the highly unlikely.

This would have explained total failure of the radios, transponder and ACARS all at once and disappearance of the flight over the Gulf of Thailand, and was the most like explanation in this event. But there was no debris field and no bodies. Also, in this event, there almost certainly would have been a huge fireball, and there was no report of one. Then there was the superb safety record of the 777 itself. So we eliminated this possibility.

Bombing destruction of the airplane

If the plane had been instantly destroyed by a bomb, this amounted to catastrophic destruction. No debris field, no bodies. Eliminated.

A bomb might have destroyed communications if in the right place, then the plane eventually broke up. Highly unlikely. There are five radios, two transponders and the ACARS on a 777. Boeing designed the placement of the routing of electronics for the radios in different locations to prevent simultaneously failure, a 777 test pilot told us.  If the plane had been bombed and progressively came apart, it’s likely a radio distress call or a transponder 7700 Mayday signal would have been made–and parts would have been strewn along the flight path. Nothing of the sort happened. Eliminated.

Fire destroys communications, incapacitates the crew and the plane becomes a “ghost” plane.

See the five radios and two transponders comment above. See also our previous writings about the ample smoke and fire detection equipment on the 777 and four previous, in-flight fire accidents we cited in which the crew had plenty of time to radio a distress call: Valujet, Swissair, Asiana and UPS. The flight crew has full-face fire/smoke masks. Radioing is a press of the thumb of a button on the control wheel. A fire of such magnitude would have progressed to destroy the plane without all the turns, altitude changes and another 6-7 hours of flight. Eliminated.

To buy into this, the plane would have had to go in a straight line like the Helios Airlines or Payne Stewart examples to fuel exhaustion. This didn’t happen. The gyrations of turns and altitude changes demonstrate otherwise. This also assumes the depressurization went undetected by the pilots and they didn’t have the sense to radio a distress call, nor does it explain the total shutdown of five radios, two transponders and ACARS. Eliminated.

This wouldn’t have prevented a distress call. Eliminated.

Eliminating the highly unlikelies leaves us with the possibilities, however improbable.

Human intervention is, for many of us, the only thing left that’s possible. By definition, this would be a criminal act. The question, then, is by whom? The answer is: a rogue pilot or pilots; a hijacker, either taking control of the airplane or forcing the pilots into moves under duress; or a terrorist plot of some kind.

We may never know the answer to this, even if the wreckage is located and the black boxes recovered. We’ve previously written how the Cockpit Voice Recorder will have been overwritten from the time of the event and it may reveal little of use for the last 30-120 minutes of the flight. The Flight Data Recorder should provide a record of the entire event, and would tell us if (in the theory of analyst John Nance) after the airplane turned south on its final journey whether the plane was depressurized and perhaps if this was deliberately done with a flick of the switch. But it wouldn’t tell us who was in the cockpit and whether a rogue pilot was in command or whether he was under duress. Not to be indelicate, recovery of the bodies from the cockpit would tell us if there was an unauthorized person present–if there was anything to recover.

We think investigators will ultimately conclude this was a deliberate act (there have already been statements to this effect) as the Probable Cause, but getting beyond this to the reasons and probable circumstances could well be beyond reach.

← Filling the production gap for A330 and 777 Classic: huge challenge ahead
Bridging the gap from E-Jet E1 to E2 →

55 Comments on “Sequence of Events of MH370 and the probabilities”