Airbus, Boeing plan for production gap of A330, 777 with near-term availability claims

On the eve of the Farnborough Air Show, the aviation industry is watching to see whether Airbus will launch the A330neo program. Officials recently tried to tamp down expectations that a program launch will occur at the FAS, but we would not be surprised if an Authority to Offer is announced.

The industry will also be watching Boeing to see if some 200 commitments for the 777X announced at the Dubai Air Show will be firmed up at the FAS. We certainly expect this to be the case. (We also would not be surprised if there is a significant order for the Boeing 787-10.)

Questions will almost certainly arise once again about the production gaps for the Boeing 777 Classic and the A330ceo. Boeing faces a sharp drop in the backlog after 2016 and Airbus faces an even sharper fall-off after next year.

Near-term availability is an important element in Boeing’s plan to bridge the period between the in-production 777 and the entry-into-service of the 777X, says Randy Tinseth.

There are no AirbusA350 delivery slots of consequence available until 2019 and the 777 has plenty of slots starting in 2017, three years before the 777X EIS is planned. 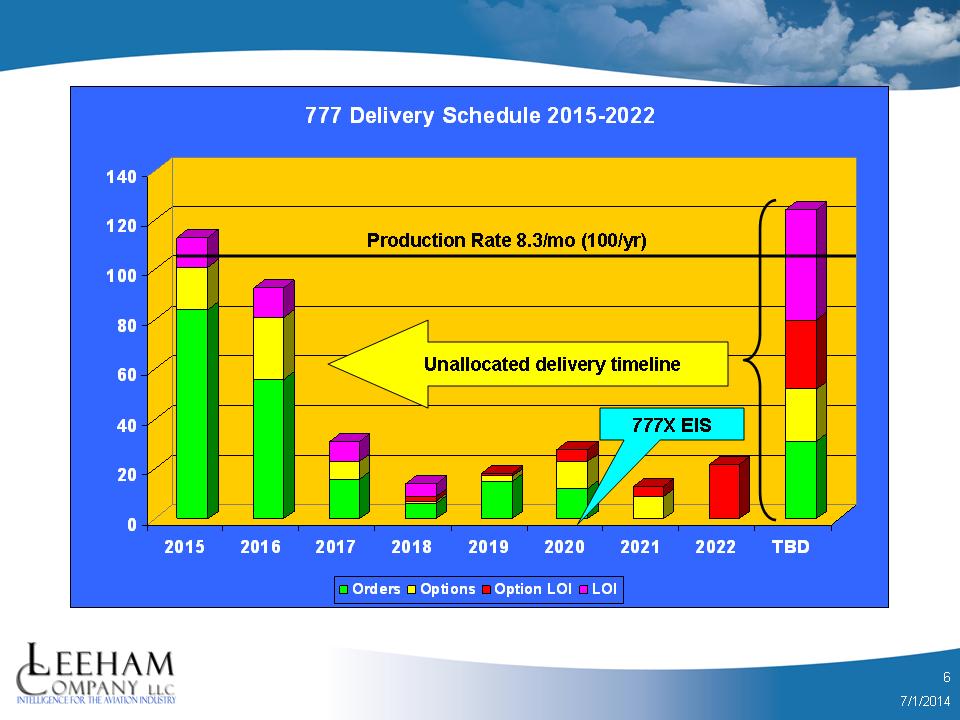 Tinseth tells us that Boeing needs to sell 40-50 777s per year to bridge the production at the current 8.3/mo rate until the 777X EIS. (We see a need for 40-60, assuming 100% conversion of Options and Letters of Intent, which is probably optimistic.)
The same is true for the Airbus A330 compared with a dearth of available slots for the Boeing 787. 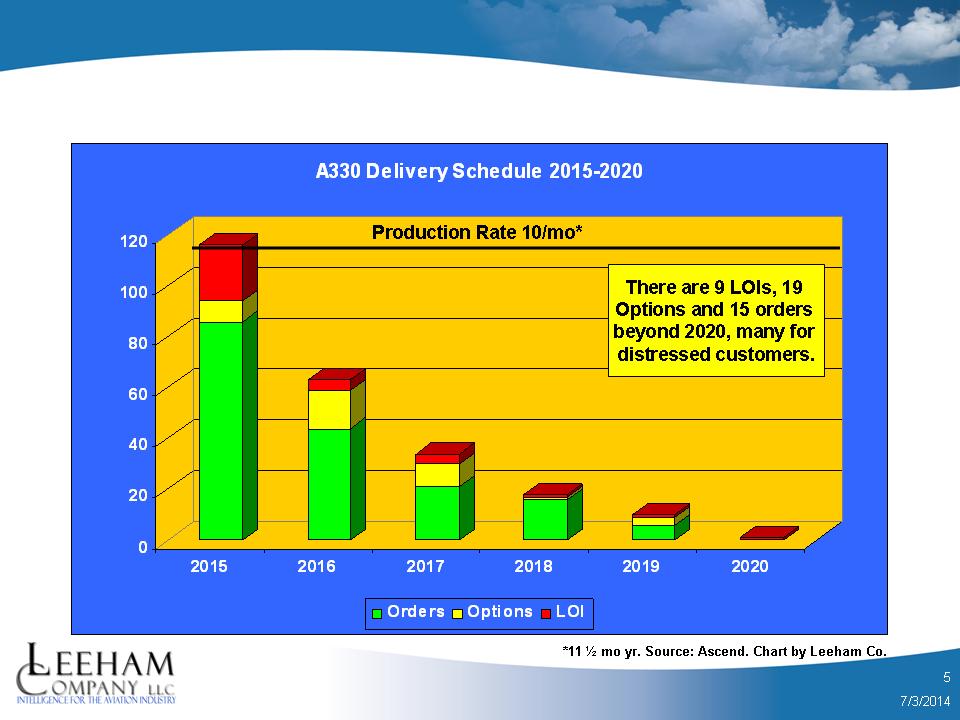 Airbus’ A330 backlog, including Options and Letters of Intent, show a sharp drop. The A330neo is necessary to rebuild the backlog–but a gap remains in 2016-17 nonetheless. Source: Ascend.

According to the Ascend data base, there are only about 20 unplaced 787s by lessors through 2020, most in the 2018-19 period, reducing the availability Tinseth refers to. Even with production rate increases, the 787 sales slots are sold out. 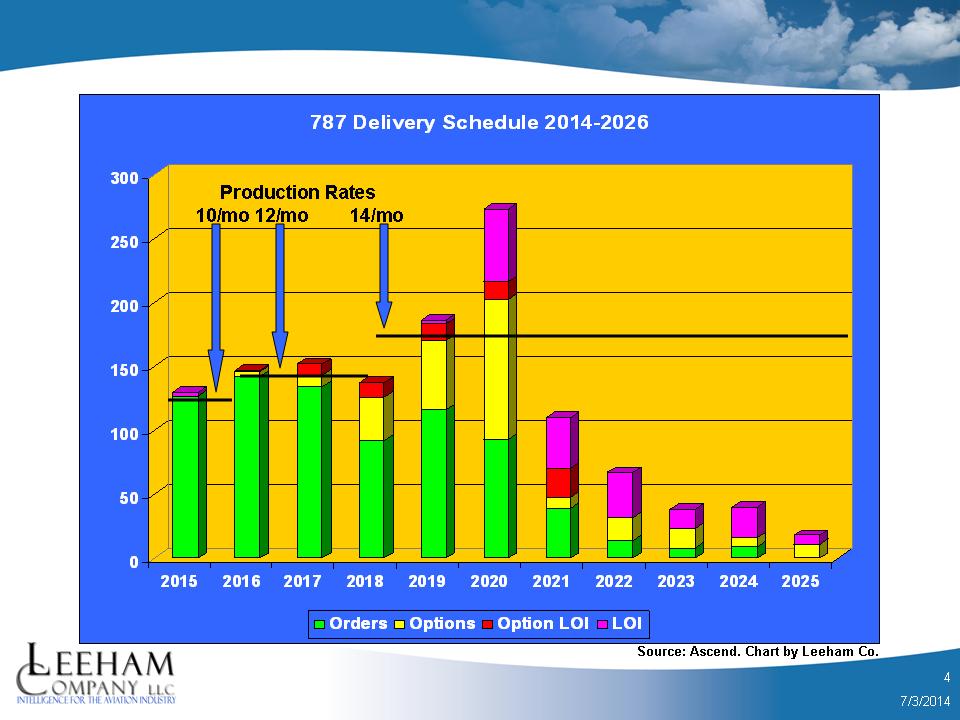 While Boeing promotes the 777 as being available sooner than the A350, the same is true for the A330 vs the 787–even with the planned production rate increases.

Tinseth dismisses the A330neo, which is no surprise, but he also ties the prospective airplane to the A350 strategy.

“To even be discussing the A330neo is proof of a failed A350 strategy. Bringing the A330neo is bringing back a plane they brought to the market years ago,” he says, referring the A350 Version 1, which was largely an A330 Extreme Makeover with GEnx engines that are on the 787, systems upgrades and other improvements, but retaining the metal fuselage of the A330. The A330neo will have fewer changes than the A350 V 1.0.

“The A350-800 on verge of being canceled [Airbus continues to deny this, saying it will be resequenced and hinting it will be reworked to make it more efficient] and the A350-1000 is struggling,” Tinseth says. “The 787 carries more passengers, more cargo, it flies higher and farther and has a better passenger experience that the A330.” But Tinseth acknowledges Airbus has little choice.

“If they don’t do this, they are in a pathway to a 30% market share [in the twin-aisle, medium-size sector]. We gave A330 life with delays in the 787. [But] We’re going to be competitive. We have the right airplanes whether it be the 8/9 or 10 that is more fuel efficient per passenger. They’re trying to compete with a 30 year old design. Cash and fuel efficiency costs are absolutely in our favor.”

Our analysis projects a 35% heart-of-the-twin aisle market for Airbus, and we concur that Airbus has no choice but to proceed, a position we detailed last December.

Airbus officials have already signaled that they believe the A330neo will match 787 fuel efficiency (our analysis, based on what we know and what we think we know, still shows a small gap of 3%-5%), which then will benefit from a much lower capital cost (a point with which we agree). The question is whether Boeing will drop pricing on the 787 to compete. Tinseth claims this answer is no.

“They’ve been very aggressive in pricing the A330 today. Customers want more value for the money they spend and have a natural hedge for the fuel in the future,” he says.

Airbus has announced almost no A330 sales year-to-date, and the A330 Regional—announced with some fanfare at the Paris Air Show last June—failed to produce the up-to-200 orders from China for which the airplane was intended.

Industry observers believe potential A330 customers are on the sidelines, waiting to see whether Airbus will launch the A330neo. As for the A330R, some believe this potential order continues to be caught up in the usual Chinese game of holding orders hostage for international political goals.

25 Comments on “Airbus, Boeing plan for production gap of A330, 777 with near-term availability claims”