So what does this all mean? Although the next last-off-the-line aircraft may not react in the same exact way, we can probably anticipate that they will depreciate at a faster pace than their new replacements. Cyclicality, amongst other factors, will also play a role in how quickly these trends take shape and depending on where the market is over the next 2-3 years, this may help or hinder the existing aircraft fleet.

(Click on each image to enlarge and get a crisp view.)

Current Market Values as a Percentage of the New Aircraft Price:

Current Market Values of A320s and 737s as a Percentage of the New Aircraft Price. Source: Collateral Verifications.

As mentioned in our last newsletter, many are asking whether or not we are at the peak of the cycle. In the charts below, we wanted to show the value and lease rate trends of 9 Yr. old aircraft (737-800, A320, and A321) since the peak of the last cycle. Why nine years old, you ask? Since the oldest 737-800 in 2007 was Nine years old, it was better to keep everything consistent and use the same vintage for the other aircraft. Although values have risen in the last 12 months, they are still not up to the levels seen in 2007. Lease rates have also been on the rise but they are also not back up to 2007 levels. Interestingly enough, A321 lease rates for nine year old aircraft have remained fairly stable over the last seven years. For the lease rates, please keep in mind that interest rates are much lower than in 2007 which means that they will not need to be as high as in 2007 to be comparable. In doing a quick payment analysis using 10 Year Swap rates in 2007 vs 2014, we found there to be a difference of about $20k-$30k per month in the lease rates when adjusting to the higher 2007 money cost. This puts still puts today’s lease rates lower than in 2007 for most aircraft but it doesn’t put them far off. Should the current trends continue, CV feels that lease rates may reach 2007 levels in the next 12-18 months if not sooner. 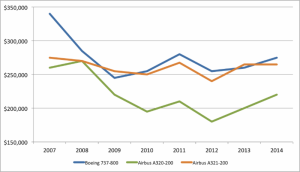