Rescuing a polar bear cub: Long-time readers of this column know we’re fascinated with polar bears, so when we received the following press release, we couldn’t help but share the story with you.

The crew of a Russian Mi-26 military helicopter from the Eastern Military District Army Aviation airbase saved a baby polar bear from starving to death in the Arctic, after the young bear became separated from its mother. 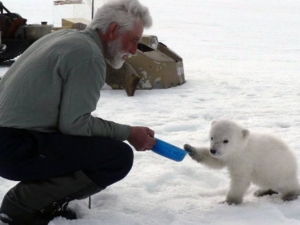 The Mi-26 was carrying out a routine transport flight in the Arctic zone, delivering goods from Anadyr to Wrangel Island, when one of the crew spotted a lone polar bear cub wandering along the Chukotka shore. The crew carried out several sweeps of the area, but there was no trace of the cub’s mother. The decision was therefore taken to pick up the polar bear cub.

The crew landed the Mi-26 and fanned out in search of the polar bear cub. When they found it, it was exhausted and showed no sign of aggression, in fact, it moved toward them. After giving it some warm food, the helicopter crew took it on board.
The crew said the cub was calm during the flight, wandered around inside the 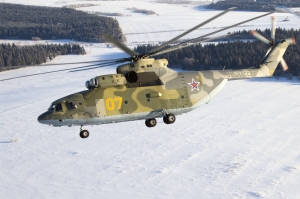 helicopter, looked around, and made friends with the people who rescued it. They named it Umka, after a well-known Russian cartoon about a young polar bear Umka who was particularly curious about its surroundings. After landing, the crew contacted environmental protection authorities and handed the cub over to them. The Mi-26 crew helped support the population of this endangered species, registered in Russia’s Red Book of species under threat. The young polar bear is now in a wildlife reserve on Wrangel Island.
Mi-26 helicopters, which are used to transport cargo in the Arctic zone, are the largest heaviest-lifting series produced helicopters in the world, and can transport up to 20 tonnes of equipment and large cargo on an external sling or internally. Mi-26 helicopters are also used in transporting troops, fuel, medical evacuation, and for firefighting. The helicopter is produced at Rostvertol, a Russian Helicopters company.

Flight tests are currently being carried out on the modernised Mi-26T2 helicopter, which boasts reduced crew numbers, a ‘glass cockpit’ which improves its ergonomics and the latest avionics. Mi-26T2 can be operated any time of day or night.

New turbo-prop, sort of: There is a new competitor with a sort-of new turbo-prop to challenge Bombardier and ATR, the Regio-Aviasi Industri R80. It’s a resurrection of the old IPTN N250 of the 1990s that was discontinued in the wake of economic conditions then. The R80 is updated and it has 145 orders.

What is perhaps more needed is an inexpensive entry into the 19 seat market. There has been no replacement for aging Beech 1900s and similar aircraft and there remains a need for this size throughout the world. Viking Air of Canada resurrected the de Havilland Twin Otter, but at a list price of $7m, this is too expensive for many small airlines in need of a replacement.

The challenge, of course, is that it costs nearly as much to build aircraft that are smaller as larger ones, but getting a compensatory price is difficult. This is the reason Bombardier discontinued the Dash 8-300 in favor of the larger Q400.