I have mapped out below the last five years of OEM forecasts (Boeing World Air Cargo Forecasts and Airbus Global Market Forecast data) on widebody conversions calibrated against the actual widebody aircraft conversions redelivered and the current respective order books. If this is half right, it suggests that if in 2010 you were a widebody aficionado and you set your stall out on the Boeing or Airbus 20 year forecasts published that year, you would, reading their 2014 forecasts, now be looking at a 46% reduction in that forecast and your 2010 business plan might be developing cracks.

In terms of performance to date, a quarter the way through the 20 year 2010 forecast (assuming an equal spread of conversions across the 20 years of the forecast) we are currently some 70 conversions behind the Boeing 2010 forecast, a 50% drop off from where we thought we would be. It looks unlikely that the variance can be recovered in the remaining 15 years of the 2010 forecast. In the meantime Boeing and Airbus have updated their 20 year forecasts, and the overall drop off forecast is significant.

One question is, have the OEMs now updated their outlooks enough? Could both forecasts still be too optimistic and could our 2010 investor be looking at a further 50% drop off when revisiting the OEM forecasts in five years’ time (2020)? 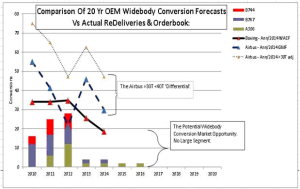 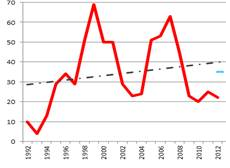 Figure 2. Wild swings in the wide-body P2F conversions during the past 20 years. Source: LCF. Click on image to enlarge and for crisp view.

Before launching into answering the question, a couple of comments on the methodology applied. The 20 year forecast is broken down to an annualized average. I know we will end up with wild swings (Figure 2: wild swings experienced in the last 20 year in the widebody conversion market) but it’s a snapshot of how we have done and are doing in the current decade (2010-20). 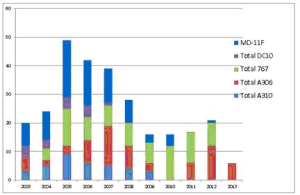 Figure 3. LCF’s own view of the 20 year P2F demand. Source: LCF. Click on image to enlarge and for a crisp view.

To try and answer the question, it seems to me that the >100T is dead for conversion opportunities and the jury is out how the <100T widebody conversion opportunities will pan out. Assuming the future will replicate the past, then after taking into account that the >100T conversions are now out of the picture; there is no feedstock and good, new long range products exist (the 777F & 747-8F). Assuming Boeing launches the 777-200ER P2F (it’s a straight MD11 replacement (82T payload) and key potential target operators are currently FedEx and UPS)), will the 777-200ER BCF fit in future fleet plans? If so, then the picture that would develop (assuming the past 10 years were replicated in the next 20) would reflect approx. 300+ conversions over 10 years or 600 over 20 years and nearer the Airbus forecast, or what we think the Airbus widebody forecast is. (Figure 3.)

The problem is that the future may not replicate the past. The leakage from the medium widebody conversion heartland could be significant. Key factors here are:

LCF is a conversion solution for all the third and fourth generation widebody passenger aircraft fleets. The LCF proposition is that there will be demand in some markets for an alternative approach that reduces the engineering challenge and the cost associated with undertaking conventional P2F conversions on third and fourth generation widebody aircraft. The underlying demand for low capital cost, low utilization widebody lift will remain, but we need to recognize that the appeal for widebody conversions is being eroded and this demands cheaper and more flexible conversion solutions on fuel-efficient platforms. In time, this could leave the flexible, low cost LCF solution well placed to compete with high capital cost OEM conversion solutions.