Boeing and Washington State; and: Congressional meddling may threaten KC-46A

The Washington State Legislature may consider implementing a mechanism to track the benefits of the Boeing 777X tax incentives granted last year, according to the on-line news service Crosscut. Boeing opposes the measure, according to the report. 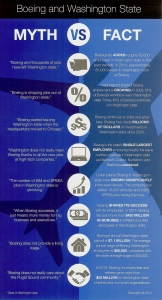 The accountability is a key drive from Boeing’s unions, IAM 751 and SPEEA, the touch-labor and engineers’ unions. Shortly after Washington granted $8.7bn in tax breaks to win the 777X assembly and wing production for Boeing, the company began moving thousands of engineering and technical jobs out of state. None appeared to be directly to the 777X, however, although some X work was awarded to Boeing’s St. Louis operation.

The unions complained that the tax breaks didn’t have job guarantees tied to them, in contrast to tax breaks granted by South Carolina for the 787 assembly work. 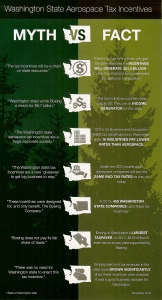 The union effort seems to be gaining some traction with the potential legislation to require metrics proving their worth. Boeing is countering with a campaign of mythbusting. We received a two-sided card from Boeing (Figures 1 and 2) outlining its view of Myths vs Facts.

We’ve pointed out on several occasions that the tax breaks provided by Washington, as an extension of those granted for the 787, were ruled by the World Trade Organization to be illegal. This remains under appeal by the US Trade Representative. Should the finding be upheld on appeal, the 787 tax breaks (and presumably the 777X’s) will have to be replaced by something of similar economic value, according to the 787’s terms and conditions with the state.

Separately, Congressional meddling once again seems on the precipice of screwing up a procurement program. Defense News reports that Congress may delay retirements of the KC-135 and KC-10. This could have an adverse affect on the KC-46A tanker program, Defense News writes. The KC-46A will be built by Boeing’s Washington facility in Everett. Our view of Congressional meddling continues to reach new lows.

← USAF moves up AF One replacement, reports Inside Defense
737 MAX 8 could be enabler for some LCC Long Haul →

17 Comments on “Boeing and Washington State; and: Congressional meddling may threaten KC-46A”