Germanwings 4U9525 lost over French Alps; chiefs of state at site. 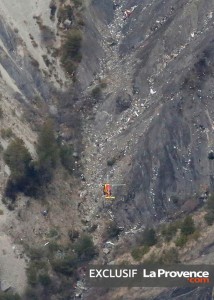 Note: we continue to add latest news to this article, updates are from now on in blue.

March 23, 2015; An A320 from Germanwings, a subsidiary of Lufthansa, has crashed today after contact was lost with the aircraft at 10.47 UTC over French Alps. The aircraft, with 144 passengers and six crew members, was on scheduled flight 4U9525 from Barcelona, Spain to Düsseldorf, Germany. The crash site has been identified north of Dijne-le-Bain in Alpes-de-Provence, French authorities has reported there are no survivors.

Nothing is communicated about a possible reason for the crash, which happened after a steep descent from cruise altitude just after the aircraft reached the French coast east of Marseilles, Figure 2. 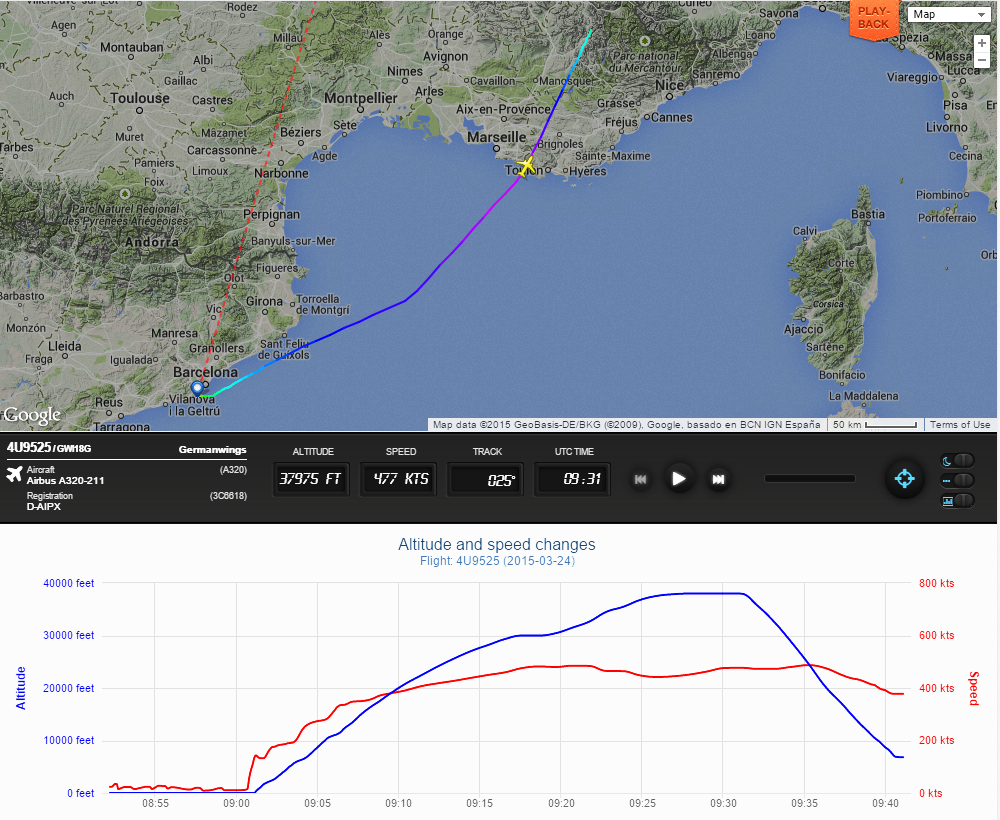 Figure 2. Flightradar24 playback of flight-, vertical path and ground-speed for 4U9525. Source: Flightradar24.

The vertical path shows a normal flight until 09:31 (position of aircraft symbol on map) when the aircraft enters a fast descent with over 3,000 feet per minute. The aircraft groundpeed remains constant and then tapers slightly to just under 400kts just before impact with the French Alps north of Dijne-le-Bain. Course is steady during descent at 026°. Place of impact is  N44°16’49.80 E6°26’22.20 , enter this in Google maps and press search. Nearest village to W is Le Vernet with a larger village to NW, Seyne, also named Seyne-les-Alpes where most of the rescue teams have put up base.

Figure 3 shows the immediate vicinity of the crash site with closest village Vernet and the road that leads to the closest mountain top, Col de Mariaud. The crash site is in Ravin de Rosé, east of this top. 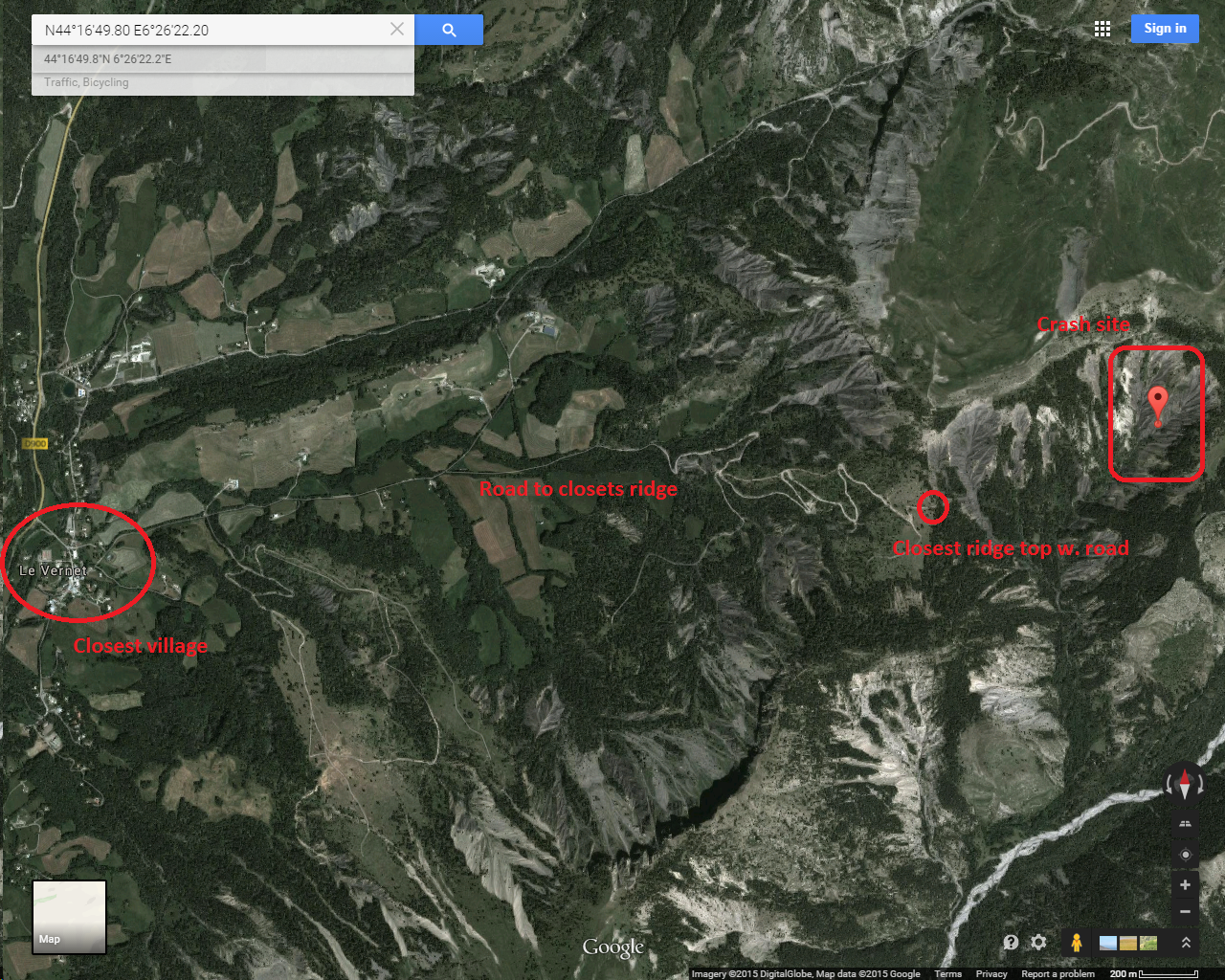 The French rescue specialists from the military police has searched the crash site and found the flight voice recorder black box, the data recorder is still being searched (first information was the other way around, this has since changed). The aircraft flew directly into the side of a ridge and was virtually pulverized. There are no survivors.

There has been rumors of a distress call from the aircraft, French authorities has confirmed that this is false, as they saw the long descent (8 minutes) and could not get contact with the aircraft they declared an emergency at 10:36 UTC.

The French Bureau d’Enquêtes et d’Analyses, BEA, will lead the investigation of the accident as it happened over French territory, Germany are sending representatives to assist their french colleagues. As a matter of routine, investigators will consider:

The crash site is in a remote area and recovery of debris from the aircraft will take long time especially as the weather, which has been good Tuesday, is now turning worse. The flight voice recorder can give crucial information why the descent was initiated but it is not sure, if events has surprised the crew the recorder gives less information than if the data recorder would have been in the hands of investigators. The search for this recorder will continue Wednesday, crash investigation personnel from the French military police (les Gendarmes) has camped on the crash site to secure the area and to continue the search at day break.

BEA Paris has started the investigation of the voice recorder, it is damaged but readable. BEA has released a picture of the recorder:

They will hold a press conference at 15.00 UTC. It remains to be seen how much of the mystery the voice recorder can clear, especially what happened to the crew. It was clear weather in the crash area and they should have seen the approaching alps. If the voice recorder can not bring all pieces needed for clarity the data recorder, which is not yet found, should. The full investigation with final report typically takes a year or more.

The working assumption from Investigators and Lufthansa/Germanwings is that this is an accident and not a terrorist attack. What confounds experts is that no communication or change of transponder code followed on the un-announced and un-allowed descent from FL380, yet the descent was orderly as if programmed into the aircraft autopilot and not the falling out of the sky that a catastrophic even would have caused.

The accident has got a lot of attention, the last airline accident in France was the Concorde crash July 2000. French interior and ecology ministers are on site Tuesday as are Airbus Group CEO Tom Enders and Airbus CEO Fabrice Brégier.

French President Francois Holland, German Prime Minister Angela Merkel and Spanish Prime Minister Mariano Rajoy arrived at Seyne at 13.00 UTC after their helicopter had first circled the crash site. At Seyne they talked at length with rescue personnel before going for a prepared briefing on the rescue operation: 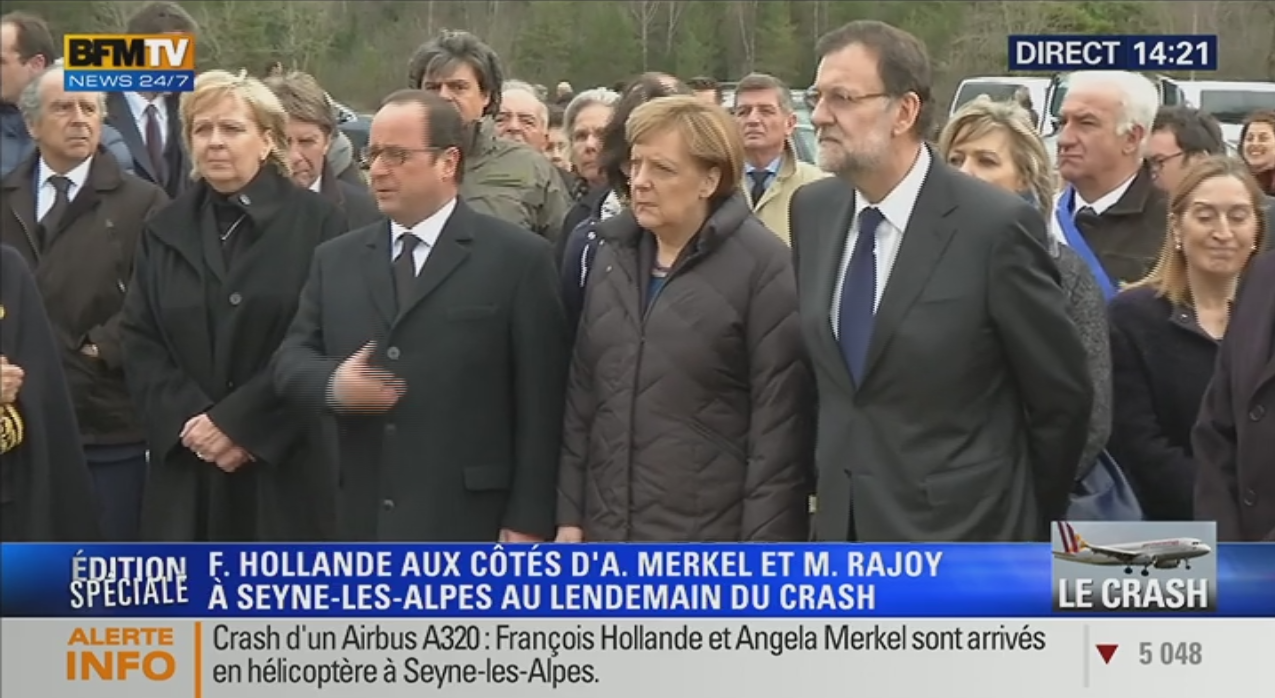 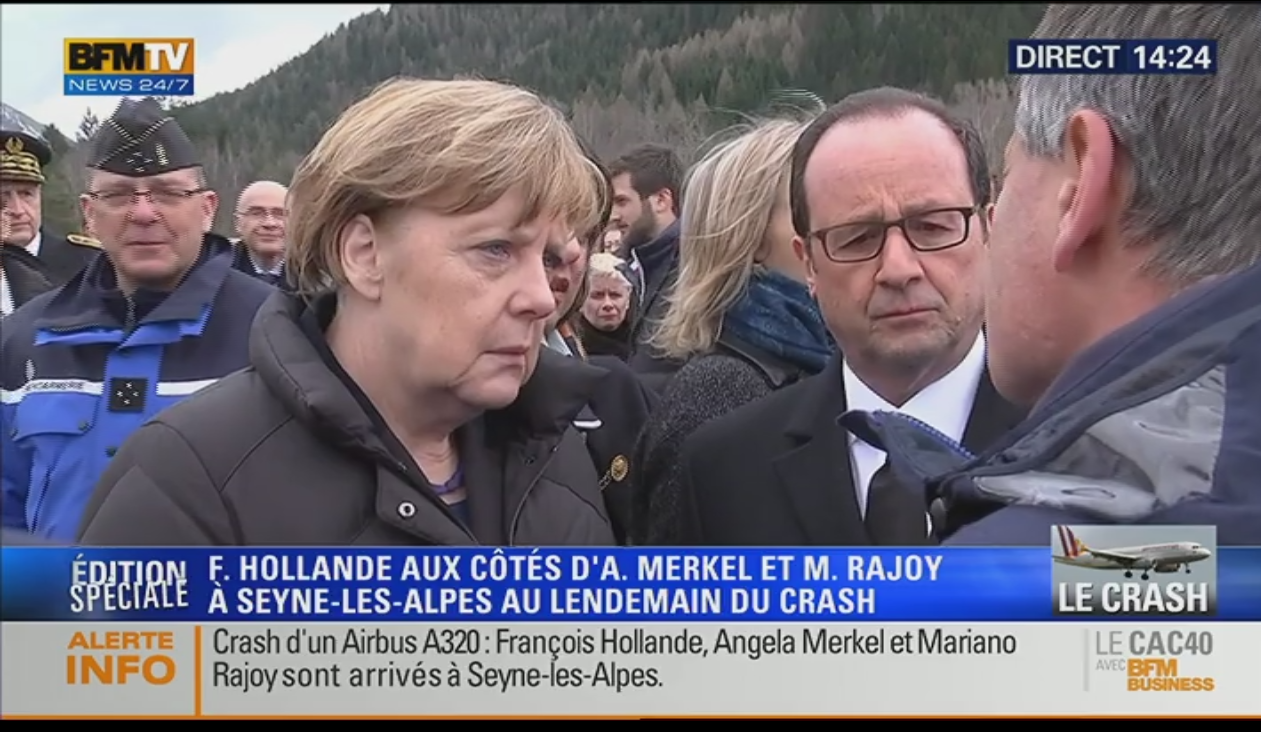 They discussed at length with Gendarmes who had been on the site. Source: BFMTV

Lufthansa is said to fly victim families to the area tomorrow via Marsielles, the villages Seyne and Vernet has arranged for reception and condolence facilities in cooperation with the authorities in Dijne-Les-Baines.

The weather has been good Tuesday but should have turned worse. Luckily the forecast has not been correct, there is moderate winds and overcast with light drizzle from time to time in the area.

Our thoughts and prayers are with the families and friends of the passengers and crew.

69 Comments on “Germanwings 4U9525 lost over French Alps; chiefs of state at site.”