Epstein cites BAML’s Japanese industrial analyst Takahiro Mori in his own note dated May 21. Mori also wrote that Boeing is cutting pricing to its supply chain in Japan, putting additional squeeze on profits. 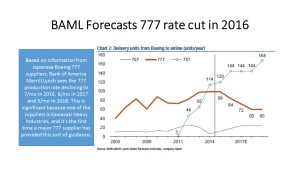 “We attended results briefings held by Jamco, which manufactures aircraft interiors, and SinMayawa Industries, which is one of the manufacturers of Boeing parts. Both companies are suppliers to Boeing and are likely to be affected by Boeing price cuts,” Miro wrote. “We also expect Mitsubishi Heavy Industries and Kawasaki Heavy Industries…to be negatively affected. Cuts in production of the 777 from 2016 are likely to weigh profits down from FY2/17,” he wrote.

“Information is now availalble on the volume Japanese suppliers plan to provide to Boeing over the next 12 months,” Mori wrote in his note. “The output is likely to be cut from FY3/17 (April 1, 2015-March 31, 2016). “The (current) order backlog will be delivered by 2020, when the new 777X will be delivered…so annual production is unlikely to stay at 100 aircraft. Cuts in production will lead to lower profit.”

The BAML note is significant because, as far as we know, this is the first time major Boeing suppliers have given an aerospace analyst guidance on 777 production rates.

We checked with another major 777 supplier, which is also planning on 777 rate cuts, though not as early as 2016. This supplier continues to monitor sales and doesn’t see 777 sales picking up to sustain the current production rate of 8.3/mo.

Boeing CEO told aerospace analysts at its investors day earlier this month production rates will be maintained at the current 8.3/mo (100/yr) because feathering in the 777X production will be the equivalent of two or three 777 Classics. The assertion was met with skepticism on Wall Street, this column, and, according to our information, within Boeing Commercial Airplanes.