May 28, 2015, c. Leeham Co. We are visiting the Airbus Innovation days where we have been given an update all Airbus civil aircraft programs. The perhaps most interesting update is the progress of the A350-1000 as its forerunner, A350-900, is ramping its production to 15 aircraft during 2015.

The A350-1000 is next in turn; it will be flying next summer and will enter service with first customer Qatar Airways summer of 2017. The A350-1000 is getting more real and Airbus gave a good insight to the aircraft’s readiness for prime time during the sessions of today. 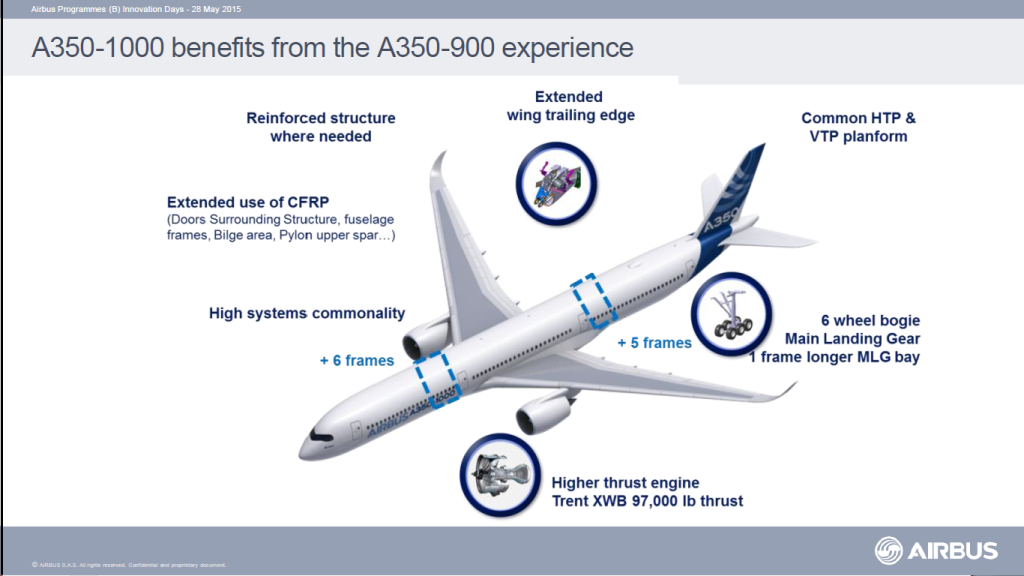 The A350-1000 is building on all the knowledge and data that Airbus has gathered on the A350-900. With this experience and knowledge, Airbus has taken the chance to go one step further in a number of areas to gain further weight and reliability advantages for A350-1000, Figure 2. 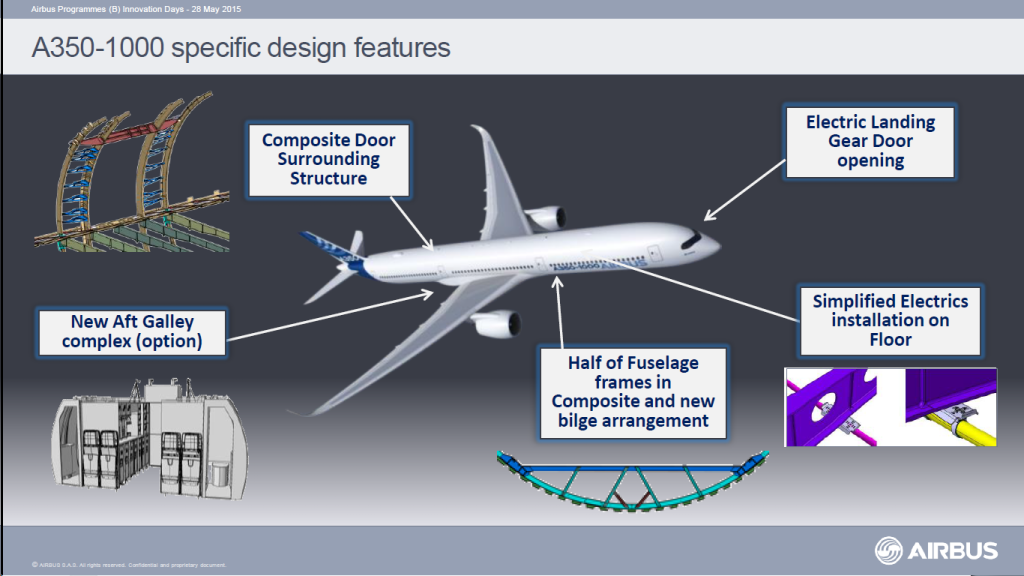 Primary areas of improvements are:

Airbus has also worked on increasing A350-1000 competitiveness versus Boeing’s 777 by increasing the cabins passenger carrying capability. We have presented the changes in our article A350-1000 gets upgrade to 387 seats. These changes will  be vital in the competition with Boeing’s 777X, which will come in to the marketplace in 2019-2020. 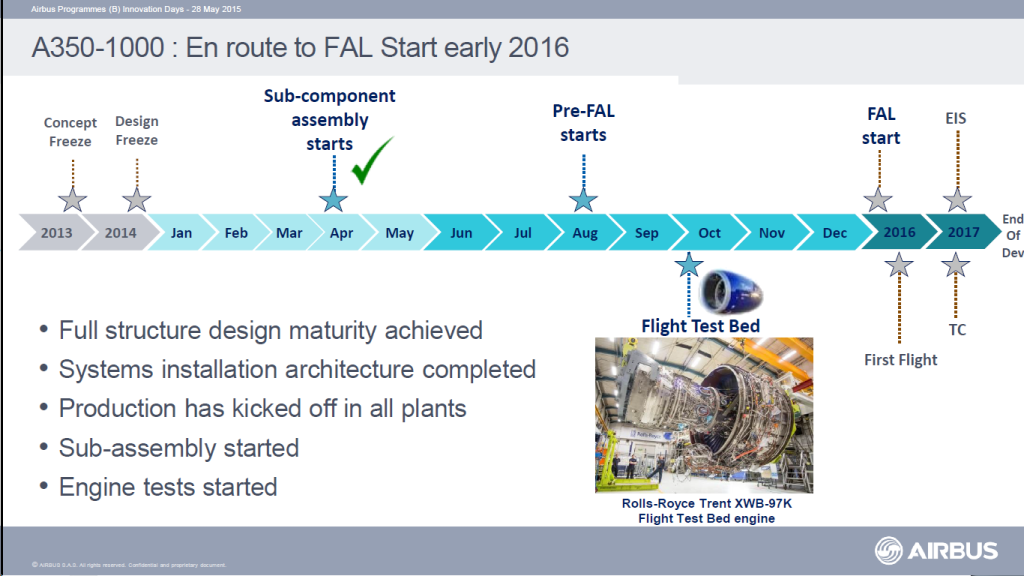 This meant that material, like forgings, could be cut to their final dimensions (having been cast earlier and machined down to rough dimensions) and fuselage and wing skins in CFRP could be taped out in Spain, Germany and US.

Subsystems that had to be changed from A350-900, like the air conditioning system (to cater for 369 passengers instead of 315 for the -900 version), had their final interface specifications frozen and could now be finally configured.

First versions of all these parts could now be produced and be delivered during the spring and summer to three Pre-Final Assembly Line sites:

The actual Pre-FAL assembly with integration of all parts and installation of system starts in August. It will take these sites until January-February 2016 to complete their sections and to deliver them to the A350 FAL in Toulouse.

In addition to these parts from the Pre-FAL sites, empennage parts get built in Spain for the horizontal stabilizer and tail cone with Hamburg doing the vertical stabilizer. Engines are delivered from Rolls-Royce Derby and landing gear from United Technologies’ Goodrich division.

The fuselage sections gets delivered to Station 59 of the FAL to get large test equipment and monuments installed. Then the sections will be joined in Station 50, which has been expanded to three parallel stations to cater for A350-1000 production. The next production stop, Station 40, has also been expand, this time to four in parallel to have A350-1000 test aircraft production and subsequent production ramp to not affect the ramp up of the A350-900. The next step also has been expanded, system integration and test in Station 30, to four sites in parallel.

Airbus COO Tom Williams commented that the reduction of A330 production to six per month for next year is not all bad for Airbus. The reduction in A330 activity is happening as A350-900 and -1000 are ramping up. The A330 and A350 share the outstations to test fuel and pressure systems (Station 18) and the hangars to fit interiors and engines (C63 etc). Facilities and people from A330 FAL can therefore help the A350 program through their challenging period of -900 ramp and start of -1000 production next year.

The flight test for A350-1000 will start this year as the 97k lb -1000 engine will be flight tested on Airbus A380 like it was done for the -900 engine. Testing will contain approximately 120h flight hours where also certain engine certification test will be completed. This contributed to risk reduction and a smooth flight test on the A350-900 and will therefore be repeated for the -1000.

Flight testing of the first complete A350-1000 will start next summer and span a nine month test program with three test aircraft flying a total of 1500 hours. Certification is foreseen for Q2 2017 followed by first customer delivery.

The first A350-1000 will be delivered to Qatar Airways in summer of 2017. It will be a significant event as this is the head on competitor to Boeing’s successful 777-300ER. The Entry into service of A350-1000 will thereby mark a new chapter in the widebody competition between Airbus and Boeing.