Volga deal for 747-8Fs not as solid as assumed by some; production rate reduction likely

June 23, 2015, © Leeham Co. The Memorandum for Understanding for expansion of the Boeing 747-8F fleet of Volga-Dnepr announced at the Paris Air Show is somewhat less than met the eye at the time. 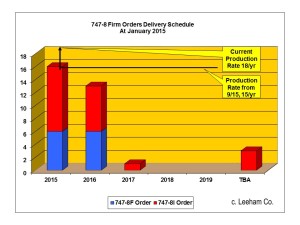 Despite a few orders subsequent to this chart’s creation in January 2015, the 747-8 production gap is insurmountable. The Paris Air Show announcement of Volga-Dnepr fleet “expansion” by 20 747-8Fs is more about options than firm orders, according to market intelligence, which does nothing to fill the gap unless exercised. The expansion is over seven years, which also fails to fill the gap at current production rates. Click on image to enlarge.

Although Boeing said the 20 airplanes will be added through a mix of direct purchases and leases over seven years, it didn’t indicate how many firm orders, options and leases were involved nor the delivery timeline. Market Intelligence indicates perhaps two of the 20 are white tails, aircraft that were built without customers. If correct, this won’t add to the backlog or production stream. Neither would options, unless exercised. Market Intelligence also indicates that firm orders are in the mid-single digits, which if correct is a far cry from what Boeing needs to fill the production gap

Some media and aerospace analysts concluded this deal meant 20 firm orders equal to a year-and-a-half worth of work for the struggling 747-8 production line, but Boeing said the fleet “expansion” is streaming the deliveries over seven years. If evenly spread, adds up to three aircraft in the production stream if all were new orders and not white tails, and options were converted to orders. Even this interpretation fails to fill the production gap.

A Boeing spokesperson said, “We are in discussion with Volga-Dnepr Group and will provide details when ready.  There is nothing else we can add here.”

Accordingly, we expect Boeing to announce a reduction in the 747-8 production rate sooner than later. The current rate is 18/yr, declining to 16/yr from September. Boeing previously said it can still make money at 12/yr, so we expect the rate to be reduced to at least this level. However, as the chart shows, the current firm order backlog doesn’t support even this reduced rate.

The USAF indicated it wants to receive the first of two replacements for Air Force One in 2018.

What raised questions over the solidity of the Volga announcement was the way Boeing worded the press release last week at the PAS. All other press releases were specific about orders and options, except the Volga release, which contained highly unusual wording, a departure from Boeing’s standard boiler-plate. Excerpts of these releases are below the page break. We made inquiries in the market, and the results are outlined above.

The following are excerpts of every press release issued by Boeing at the PAS announcing commercial transactions. Bold Face is added.

27 Comments on “Volga deal for 747-8Fs not as solid as assumed by some; production rate reduction likely”