6 May 2016, ©. Leeham Co: In a recent Corner, we covered how to navigate a modern airliner with the help of the Flight Management System (FMS). We described how the FMS uses different navigation receivers to fly the aircraft via the autopilot along the flight plan. In the end, we used a special instrument landing system to land at the Nice Airport.

The classical way to land on airports in bad weather has been to use a VHF based Instrument Landing Systems called ILS. Figure 1 shows the large installations of transmitter antennas which are necessary to get such an ILS beam to fly on for landing at a runway.

The antennae we see are only for the lateral beam, the Localiser. It guides us in the horizontal plane. There is a second transmitter with associated antennae which forms the vertical beam so that we have a two dimensional glide path to land on, with the vertical part called a glide slope.

It’s clear that it’s costly to install such ILS equipment for each runway for an airport. There have not been good alternatives to the classical ILS system until now. Several alternative systems have been proposed based on shorter wave signals to get the size of the antennae down (Microwave Landing Systems, MLS), but these have not caught on outside of military use.

Now there are good alternatives being developed. These are all based on GPS systems, with more or less advanced implementations.

A GPS system, as used in cars and aircraft for underway navigation, is based on the receiver measuring the time it has taken the signal from several satellites to reach the position of the receiver. Standard GPS signals for civil use have an accuracy of around 100m horizontally and vertically.This is not enough for a landing system that could take over from ILS where the accuracy is measured in meters.

Another problem is that the receiver must know if there is something wrong with the satellite signals that form the GPS. It must be able to ignore a faulty satellite. There are GPS receivers for aircraft which use many satellite signals to form an opinion of the GPS signals and if they can be trusted for landing procedures or not. 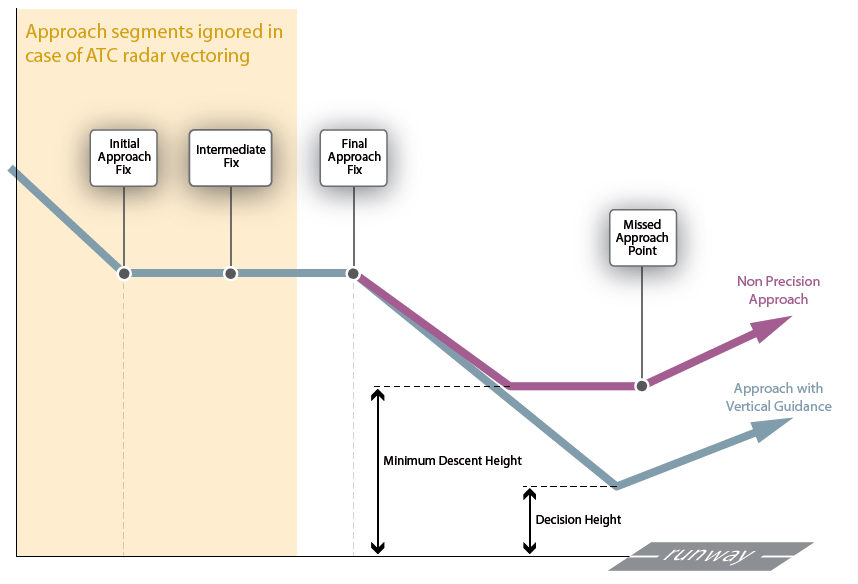 A Non Precision Approach (NPA) takes us to around 400 feet above the runway threshold by guiding us laterally through Initial Approach Fixes to the Final Approach Fix. From there we descent with a given descent rate to our Minimum Descent Height. Then we fly at that height until we can see the runway. If we have not seen the runway before the Missed Approach Point, we must initiate a missed approach procedure.

There have been several accidents using this type of procedures, the latest widely known was Flight 1354, an Airbus A300-600F freighter from UPS that crashed at Birmingham–Shuttlesworth (AL) USA.

Precision Approach
If a glide slope can be added (i.e. vertical guidance with sufficient accuracy), the procedure goes from non precision to a Precision Approach (PA). The minimum height is then called a decision height and is a point on the continuous descent to the runway threshold. This is a more controlled position, both horizontally and vertically, therefore its minimum height is lower, typically 200ft above the runway threshold. For a very precise ILS system (a CAT IIIb system), the decision height can be less than 50 feet.

If we can get a GPS-based system to have a precision of a few meters instead of 100m, we can use it to guide us both laterally and vertically. We can create a Precision Approach (PA) system which would not need the cumbersome ILS installation for each runway.

In our next Corner we will go through how this is done and how this now revolutionize the way that we will land in bad weather going forward.

← C Series charge spotlights 787 deferred costs
How good is a MAX 7X and why would it replace the original? →