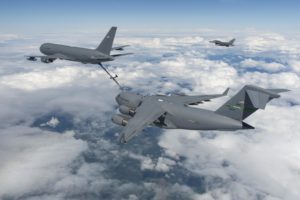 The KC-46A completed refueling of five aircraft, a requirement under Milestone C: the F16, F18, AV8B Harrier, A10 Warthog and the C17. Additionally, the KC-46A itself was refueled from a Boeing KC-10.

The C17 previously proved to be a problem when aerodynamics for the refueling boom revealed more stress than was permissible.

“Testing in flight a few months back with a C-17 revealed load issues with the boom telescope control system,” said Boeing spokesman Charles Ramey. “We discovered that loads placed on the boom by a receiver aircraft after contact were higher than expected. The boom telescope control system actively controls the extension and retraction of the boom length while the receiver aircraft is in contact with the tanker, through various flight conditions and maneuvers. This control system must maintain enough contact pressure to keep the refueling nozzle connected, but not too much pressure as to place excessive force on the tanker or receiver aircraft structure. 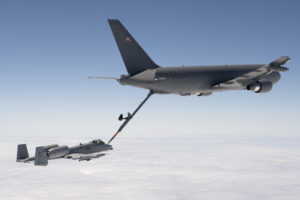 Boeing KC-46A refueling A10 Warthog. Photo via Boeing. Click on image to enlarge.

“We installed updated hardware — a hydraulic relief valve system similar to systems already employed on the KC-10 and KC-767 tankers. Two bypass valves were inserted into the hydraulic system so that if loads build up on the boom, the valves open to relieve the pressure.”

Helicopter refueling is not part of Milestone C; this comes later.

Ramey told LNC as a result of completing Milestone C, the first two Low Rate Initial Production (LRIP) contracts are expected to be issued next month. LRIP-1 is for seven airplanes. LRIP-2 is for 12.

There are five KC-46As in flight testing now. Units 1, 3 and 5 currently are configured without the refueling boom and drogues. These are testing systems other than refueling. Units 2 and 4 are in full tanker configuration.

With the resolution of the boom issues, there remains certification of the wing-mounted drogues. Ramey said this is taking longer than expected and will result in delayed delivery of fully operational KC-46As until October 2018.

Ramey added, however, that not all of the first 18 tankers (nor the full order of 179 tankers) have to be equipped with the wing-mounted drogues under the original USAF requirement. The drogues as calls WARPS, for Wing Air Refueling Pods.

The five aircraft have accumulated about 900 flight hours of testing.

First delivery of the tankers to the Air Force is scheduled for the third quarter next year.