August 25, 2017, ©. Leeham Co: We finished the weight sizing of the hybrid propulsion system for our 50-seat regional turboprop in the last Corner. Now we go a bit more into detail. There are additional parts needed in the system that we skipped over last time.

We discuss the impact of these additional components and any gains we can make with the aircraft configuration.

Details of the hybrid power chain

The power chain in the lower part of Figure 2 need more components to function.  If we use the high efficiency generators, inverters and motors as outlined, they all need cooling. The superconducting components (so-called High Temperature Superconducting (HTS) motors/generators) need cryogenic (liquid nitrogen) cooling. Such cooling systems need power and add weight. 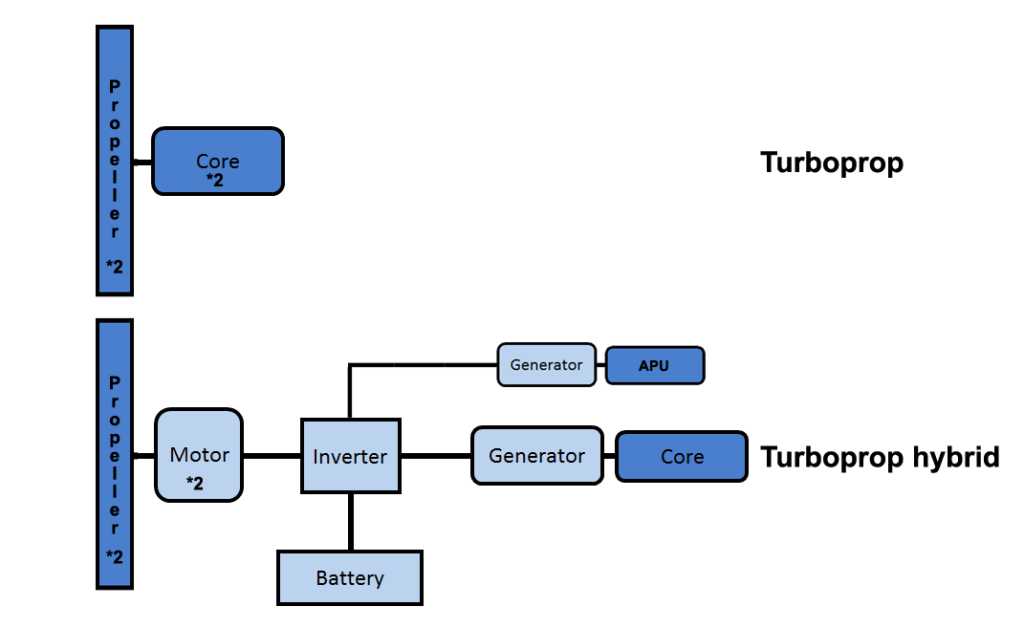 Additionally, we need to switch generators, motors, inverters (we need two for redundancy) and the battery in and out of the system. This requires solid-state switches, which adds losses and weight.

Transmitting our 3.200kW of power through the system at takeoff forces high currents. If we assume the system to operate at 1,000V, we are pumping 3,200A through the wires during take-off and 3,000A during cruise. That’s a lot!

To avoid the high currents and by it, losses, one increases the system Voltage. This can’t be driven too far as insulation from arching increases with Voltage and altitude. At present, the designs seems to stop at around 2,000V, halving the current to 1,500-1,600A.

At such high voltages and currents, the wiring will be hefty and the wire’s tiny resistance will cause heating losses. To reduce wiring losses, the distribution of power is based on DC and not AC current. We then need AC-to-DC converters after each generator and a DC-to-AC converter before each motor.

In the last Corner, we concluded the hybrid chain for our 50-seat turboprop would weigh 2.4 times as much as the original turboprop propulsion. We now see that this is not enough; it will be more with cooling, switching and power distribution.

One could argue that electrical aircraft would give new freedom to improve aerodynamics with distributed propulsors and boundary layer suction aft fans.

These are all possible solutions. But they bring improvements on the order 10-20% and we need 100%-200% or more. The electric hybrid handicaps are an order of magnitude larger than the possible gains we can make. It will take time before an electrical aircraft can compete for the propulsion of a regional aircraft.

During the series, I was contacted by Zunum Aero. We had a good discussion around electric aircraft. Zunum’s first product would be a 10-seater, all-battery airliner for short-range transport. In our final Corners on electric aircraft, we look at how such a concept could work.