The Douglas DC-6B was considered the finest, most efficient and most reliable of the piston engine airliners. Photo via Google.

Aug. 28, 2017, © Leeham Co.: Airline officials want their airplanes to sip fuel and the engine and airframe manufacturers work mightily to shave even 1% off of consumption.

Bombardier’s CSeries, Embraer’s EJet-E2, the Mitsubishi MRJ and even the COMAC C919 and Irkut MC-21 are touted to be double-digit more fuel efficient than the jets these are intended to replace.

Pratt & Whitney, Rolls-Royce, CFM and GE Aviation spend billions of dollars developing engines that drive the fuel efficiencies sought by the airlines. After all, typically airframe improvements only account for about 5% of fuel reductions. Engines account for 15% or more.

It took 30 years for the most fuel efficient jets matched the fuel efficiency of the best piston airliners from the 1950s, according a recent presentation by AeroDynamics Advisory at the ADSE conference at the Abbotsford Air Show early this month. 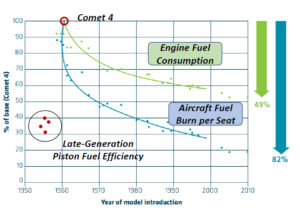 From the pistons to the jets

It was no secret that the first Boeing 707s, Douglas DC-8s and de Havilland Comets were incredibly thirsty compared with the pistons these replaced. The speed, higher utilization and greater passenger capacity are what gave jets the operating advantage over the Douglas DC-4s, DC-6s, DC-7s and the grand Lockheed Constellations of the 1950s. The DC-6B was considered the most efficient, reliable piston engine transport ever made. The ungainly Boeing Stratocruiser was considered the worst from an operational standpoint, even if popular with passengers.

The reliability of the jet engines proved, over time, to be so much better than the pistons as well.

It wasn’t until the advent of the high bypass turbofans that jet airplane finally matched the efficiency of the pistons, AeroDynamics said, citing a study, “Fuel Efficiency of Commercial Aircraft.”

The following chart is not all-inclusive—the Bombardier CSeries, Embraer EJet-E2 and several other models are not listed. What catches the eye is the Airbus A380 won’t be compliant in its present iteration. Presumably an A380Plus would be, since winglets alone will reduce fuel consumption by an estimated 4%. Other aerodynamic improvements will help (remember, this standard is about CO2 reduction, not a per-seat calculation). 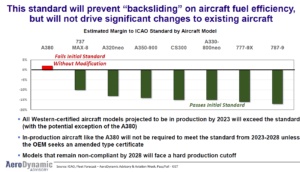 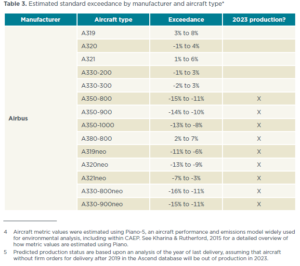 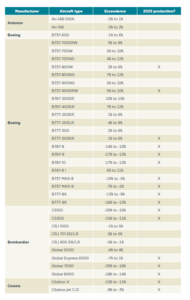 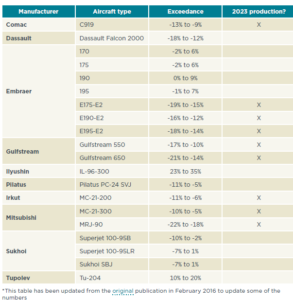