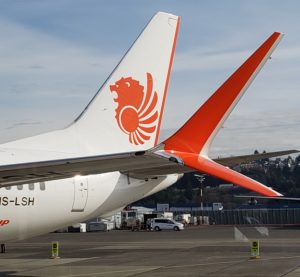 Thai Lion will operate the airplane.

Neither Lion Air nor Boeing have specified how many MAXes are the 8 or 9 models. If the MAX order is pro-rated proportionally with the NG orders, about 110 may be destined to be the 9 MAX.

This should bring the MAX 9 order book to about 360. United Airlines canceled an order for 100 9 MAXes in favor of the 10 MAX when this program was launched at the Paris Air Show last year.

Dinesh Keskar, SVP Sales for Asia-Pacific and India, said that Asia is the “home” for low-cost carriers and the MAX 9 will contribute to the growth in the region.

“This is a huge deal,” Dinesh said in a press scrum after the delivery ceremony. “Lion has been has bought over 280 MAXes. (Note: Dinesh reported (and repeated) orders for 280 MAXes from Lion Air, in contrast to 201 firm orders and 50 commitments that have been announced. This suggests there are about 30 MAXes more ordered.—Editor.) Lion also ordered the 787 for long-haul, low-cost service.

“In Southeast Asia, the growth for the LCCs is very high,” Dinesh said. “This market is so big for us and Lion Air is flying the flag for us. We’re so pleased they are taking the world’s first MAX 9.”