July 25, 2018, © Leeham News, Farnborough:  A unit of Esterline Corp. that supplies parts for all commercial airliners, including the cockpit for the Embraer E-Jet E2 is creating an advanced control system for Unmanned Systems to keep the US armed service members out of harm’s way.

Esterline’s Mason Products company of Sylmar (CA) is also gearing up to sell this system to the civilian world, beginning with law enforcement, fire departments and other public agencies, says David Tessier, president. The HaWC is used on UAVs, robots that scout dangerous situations, helicopters (providing live situational awareness) and other applications.

Eventually, Tessier expects that HaWC will migrate to uses in environmental surveys, agriculture and inspections for such industries as oil and gas. 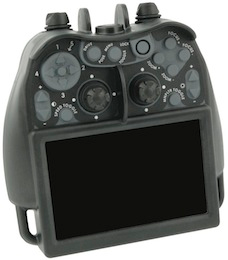 The Mighty HaWC controller complements the Small HaWC (these are their names, not adjectives). The Mighty HaWC includes a color monitor that allows the service man or woman to remotely control a robot that goes around corners and down alleys, spotting explosives, enemy combatants or other threats while safely out of harm’s way.

The unit and the unmanned systems can spot threats at far ranges, on the ground or airborne. Multiple targets can be tracked and weapons fired to take them out.

As drones gain in popularity, Tessier sees a broader market for Mason’s control units. Law enforcement, fire departments and other regulatory agencies (such as environmental) are obvious targets.

The private sector’s increasing use for unmanned systems, such as inspecting pipelines, power lines, oil spills, agricultural crops, etc., is another new market for the HaWC, Tessier says.

Mason is one of Esterline’s smaller companies, with just 500 employees and about $100m in annual revenue.