August 15, 2018, © Leeham News.: The theft of the Horizon Air Bombardier Q400 Friday brings the question how easy airliners are to steal and what can be made about it.

Having never flown an airliner before, I recently learned how to start one from cold and get it into the air. Here’s my take on how easy (or not) it is to get an airliner in the air by a novice and what can be done to make it harder. 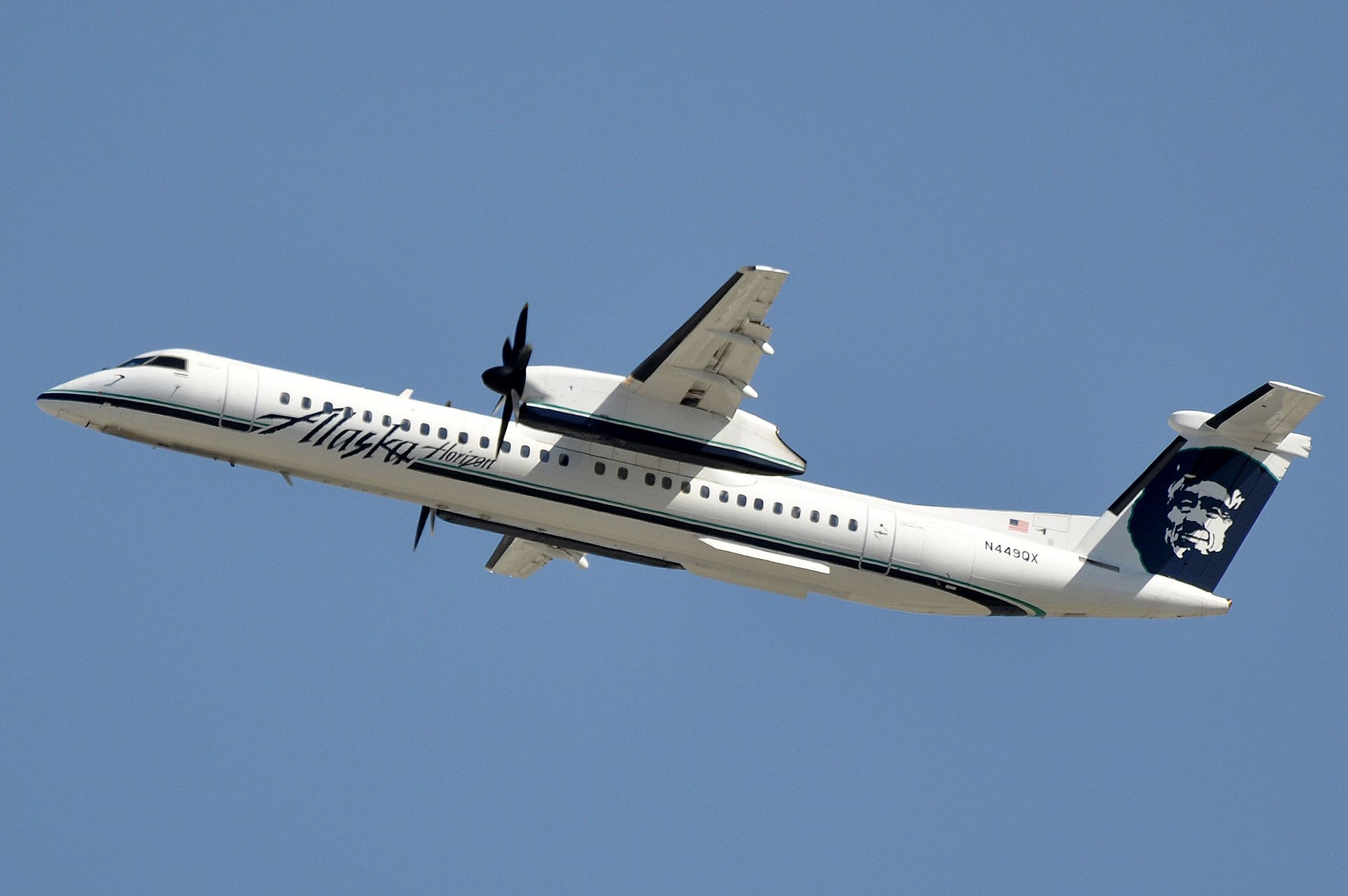 The Dash 8 Q400 involved in the Friday incident. Source: Wikipedia.

Hurdles to steal an airliner

As a former fighter pilot, I hadn’t piloted an airliner until a couple of years ago. I got invited to test-fly the Airbus A350 with three other media pilots. I wasn’t worried about the flying when preparing for the test flight. Airliners are flown like School Buses compared with flying the Super Sports car a fighter is. So, the flying was the easy bit.

The problem is the “knobbery” of an airliner. Airliners have hundreds of knobs in the cockpit and even turning the electric system on from a cold aircraft needs knowledge. And you need other systems on before you can start the engines.

Normally you first turn battery electrics on, then you start the APU to get enough power to start the engines. All this must be done in the right way and the knobs should be pressed in the right order. Getting the engines started is the next hurdle, but it’s normally not more complicated than getting the aircraft active from a cold start.

I know the cockpit of the Dash 8 Q400 that Richard Russell stole at Seattle–Tacoma International Airport (SEATAC). It’s no easier to get going than the A350 I flew.

So what hurdles did Russell get through and why?

The first hurdle is access to the apron where the aircraft is parked. If you’re an airport or airline employee with the right to access to the apron, this is no hurdle. According to press reports, Richard Russell was a Horizon employee and part of a team which towed Horizon’s aircraft within the airport.

Towing an airliner most of the time means one person driving the truck and another sitting in the cockpit with access to the brakes, a safety precaution.  If Russell was given the job to brake the aircraft in case of an emergency, he knew how to open the aircraft, get into the cockpit and sit and work in the pilot’s seat. He also knew how to get the electric system going and how to start the APU, to get the hydraulic system running, so the brakes would work.

Getting the engines going is the next hurdle. Starting the Dash 8 Pratt & Whitney PW150 engines is a tiny bit more complicated than starting a jet engine. Turboprops have a throttle and a condition lever (for changing the prop blades angles) which also doubles as fuel valves. Starting an engine involves throwing the right switch, placing the throttle and condition levers in the right position and wait. The spinning up of the engine is automatic.

Taxing the aircraft is like driving a bus or a lorry. It’s not difficult unless the airport is congested. If someone had realized it was a rouge airliner taxing, it’s easy to block it on a taxiway by putting a car in front of it. There is little chance of the Pilot getting around this. Turning around on a taxiway is almost impossible and crossing over grass to the next taxiway or to the runway is equally difficult, even with a Q400, let alone a large jetliner.

Take-off is easy. An empty turboprop on low fuel will jump into the air after a short run. Even when flaps are not correctly set. But the throttle and condition levers must be handled correctly. Directional control in the early phase of the take-off can be a bit tricky.

Flying a Q400 or an A350 is no different from flying a Cessna 152. The mechanics are the same. Russell flew around for a while. He knew enough to check his fuel consumption, showing he had some Q400 specific knowledge.

Russell then did a barrel roll. This is not straightforward. You need to do it right or you end in the ground before it’s finished.

So how could he get this far? He seemingly had no pilot training?

The PC simulators based on such commodity games as Microsoft Flight Simulator are amazingly detailed and correct today. I trained on an A320 and A330 simulator before flying the A350 (there was no A350 simulator at the time). They were close to the real thing.

Russell apparently trained on such simulators before stealing the plane. It should have been a Dash 8 simulator, otherwise, it’s difficult to understand how he got as far as getting the engines started.

Handling the aircraft brakes during towing could explain how he got an aircraft going from cold. Starting the engines is then a smaller step. Take-off is the same in all planes, full power and a gentle pull on the yoke when the aircraft starts getting light.

Landing an aircraft, any aircraft, is another ball game. Russell didn’t plan to, according to what he told Air Traffic Control. Had he tried, the chances he would have got the aircraft down unharmed would have been small.  He might have survived, but the aircraft escaping undamaged is less probable. Landing is the difficult part of a flight.

How to stop this from happening again?

Airliners are normally not locked. If they are, the ground crew doing towing has the keys. Including access to the cockpit. And they know how to get the aircraft systems on and how to start the APU.

The step which could be made harder to pass would be starting the engines. There are no reasons for a ground crew to have authority to do an engine start. The few engine ground test runs which are done in connection with engine maintenance are done by specialized personnel and in special engine test areas.

As modern engines are controlled by computers (FADECs), a code lock or other authority check could be easily implemented. A keyboard/keypad is in the cockpit, controlling the FMS. It has contact with the engine FADECs.

Other authority checks seem more difficult to implement. Service is often done on the flight control system on the ground. After service the correct function must be verified by ground personnel, making an authority check less effective.

That an airliner is so easy to steal by a non-authorized person is unacceptable. Russell was a disturbed mind with no plan to harm society. Next time a rogue pilot might have other priorities.