November 7, 2018, © Leeham News.: Boeing issued a message to the operators of 737 MAX aircraft yesterday to remind their pilots of the procedures if an unreliable Angle Of Attack (AOA) information is suspected while flying.

Below we describe what these procedures are and why Boeing is reminding its customers about what to do when suspecting a false AOA reading.

Boeing’s 737 AOA sensors and how it affects the aircraft

We have read the Boeing bulletin, what has been issued from the Indonesian crash investigators and the FAA, and what has been discussed in media. Below, we try to bring some clarity and perspective into what is sometimes sensational headlines out of a minimum of facts.

The Federal Aviation Administration has today issued an Airworthiness Directive for the 737-8 and -9:

“The FAA has issued an Emergency Airworthiness Directive (AD) that addresses possible erroneous angle of attack (AOA) inputs on Boeing 737 Max aircraft. These erroneous inputs can potentially make the horizontal stabilizers repeatedly pitch the nose of the airplane downward, making the aircraft difficult to control. The AD orders operators to revise the airplane flight manual (AFM) to give the flight crew horizontal stabilizer trim procedures to follow under certain conditions. The AD is effective immediately. Operators have three days to revise the AFM. The FAA continues to work closely with Boeing, and as a part of the investigative team on the Indonesia Lion Air accident, may take further appropriate actions depending on the results of the investigation.  The FAA has alerted foreign airworthiness authorities who oversee operators that use the 737 MAX of the agency’s action. “.

The Flight Crew Operations Manual (FCOM) bulletin from Boeing reminds operators that the existing procedures are the correct actions to be taken if an aircraft encounters a false stall warning and flight control recovery triggered by a faulty Angle Of Attack signal.

These procedures and the sensor system triggering them has stayed the same since 20 years as far as we understand. The system and its sensors have not been changed since the introduction of the 737NG in 1998.

In the case of the Lion Air Flight JT610 the correct identification and action upon an incorrect AOA sensor information seem not to have been made. This might have been made more difficult by a simultaneous false reading of airspeed from the same system (one of three systems generating airspeed on the aircraft).

To explain how a false AOA value can affect the aircraft, we need to understand the 737 flight control system for the pitch function. Figure 1 shows the flight control surfaces which exist on the 737NG and MAX. 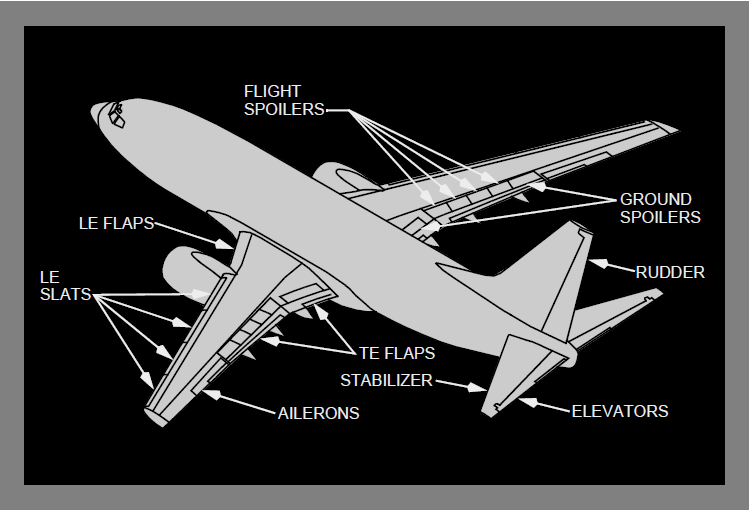 Figure 2 shows the pitch control flight control system. This is unchanged for the MAX. The spoiler system, which is not involved in keeping the aircraft controlled in pitch, was changed (from mechanical control to Fly-By-Wire), but not the pitch system. 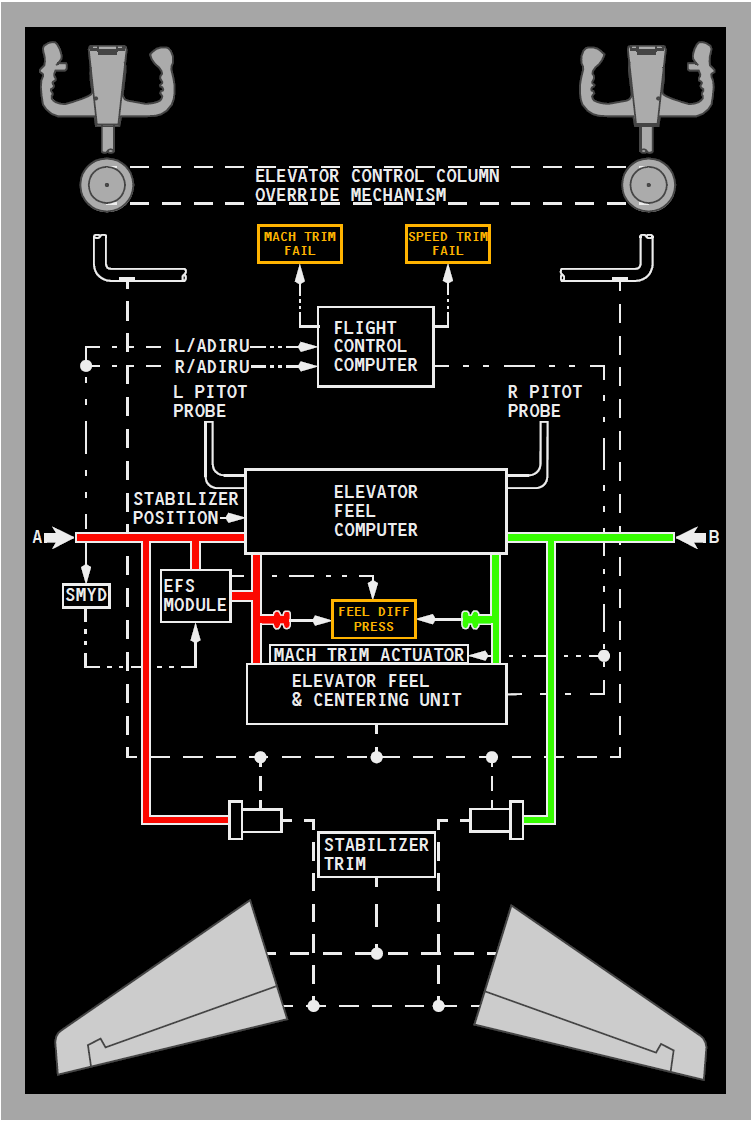 The systems have a classical architecture for a mechanical flight control system with a 100% hydraulic boost for moving the elevators. The 100% hydraulic boost of the movements from the pilots in pitch, necessitates an Elevator Feel and Centering unit (otherwise the pilots don’t know how much nose up or down command they’ve given as the hydraulics isolates them from the aerodynamic forces acting on the elevators).

This Elevator Feel unit is controlled by an Elevator Feel Computer getting its data from the Air Data Inertial Reference Units (ADIRU). The ADIRUs are the collectors of the data from the Pitot, Temperature and Angle Of Attack sensors, Figure 3. Note the last Alternative static ports and Auxiliary pitot probe shown in the figure; these go to a third totally independent standby Air Data Computer and Display unit in the cockpit. 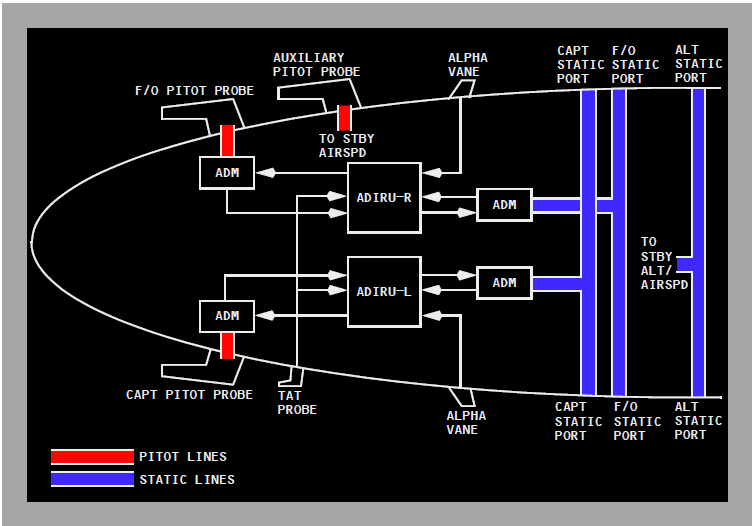 Faulty signals and their effects

The Indonesian crash investigators have said the 737 MAX involved in the crash has flown with unreliable airspeed information in the last four flights. We interpret this as one of the primary ADIRU systems has delivered unreliable airspeed. The flight crew prior to JT610 identified the unreliability to the captain’s displays, which should mean the left ADIRU with sensors had a problem. Exactly what’s the root cause of this unreliable information (sensors, computer, communication to displays…) is not known.

The actions to correct the problem after the prior flight seem not to have worked. In the crash flight, the problem seems to have affected the Angle Of Attack information. Whether the Alpha Vane or some other part of the system generated this false reading is not known.

The AOA sensor measures how large the angle is between the approaching air and the wings pitch incidence. If this angle is too large, the wing stalls (loses lift). To combat such a situation, the 737 (as other airliners) has an implemented Stall warning and recovery system.

The angle of attack is also used to control an Automatic trim action during manual flight to gradually relieve the pilot of any constant stick forces. This action is not described in the 737NG FCOM and might be the reason why the bulletin is restricted to the 737 MAX type, which has implemented this to increase longitudinal stability for this type.

Any such Automatic trim action which doesn’t makes sense has the feel of a runaway pitch trim which is a very common emergency simulator training scenario. In isolation, this should be easy to spot and the correct action (Cut out the trim as described below) could be taken in relative calmness. I’m inclined to think the JT610 crew had to handle a more difficult and stressing false Stall warning and recovery situation, which is the same between the 737NG and the 737 MAX.

The Stall warning and recovery functions are:

If the crew suspects an Automatic trim action or Stall warning to be false, the Operating Procedure is to switch off the Nose down trim action by disengaging both trim channels of the Pitch trim system and trimming the stabilizer manually by the wheel. These switches are placed on the central pedestal, Figure 4. 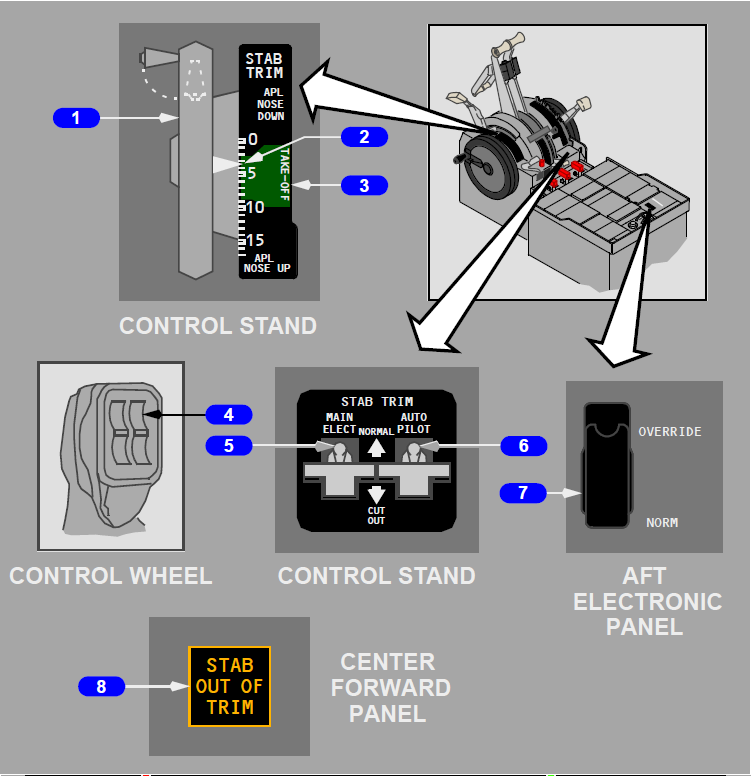 Figure 4. Control stand Switch to Cut Out the AUTO PILOT’s STAB TRIM function (No 6) and the PIlot’s trim channel (No 5). No 4 are the Pilot’s trim buttons operating the MAIN ELECTrical trim (No 5) in normal operation. Source: 737NG FCOM.

It’s this action that Boeing’s message conveys, reminding the 737 operators this is the procedure for suspected false stall actions caused by a false AOA reading.

The 737 stall warning and recovery system

One can react to the above actions of the flight control system in the 737. But one should know this chain of actions have been defined by the 737 Flight Control team after flying the 737 since 1967, with many thousands of work hours research behind the design and over 50 years of airliner flight control design experience. It has also operated without known adverse effects in thousands of 737NG over the last 20 years.

In this case, the events might have overloaded the Flight Crew on JT610. We don’t know why. And it’s best to wait until we do. We need to understand what exactly the flight crew was confronted with and their actions as a result.

It’s by now clear it’s not a simple fact of them stalling the aircraft due to one side airspeed readings being unreliable. They had more to fight, so far is understood. But exactly what, we don’t know and therefore we don’t speculate further.

What we wanted to do with this article is pointing out, as far as we know, the system involved is a tried and tested system. Why this didn’t help the JT610 crew, we don’t know, but it will be communicated in due course.