May 31, 2019, ©. Leeham News: Last week the new Airbus CTO, Grazia Vittadini, said we should not expect electric aircraft anytime soon when presenting at Airbus Innovation days. What is realistic is hybrid developments, not battery-based designs.

After having made the basic checks about Electric aircraft in my Corner series 18 months ago, this was music to my ears. Finally, someone was curbing expectations. 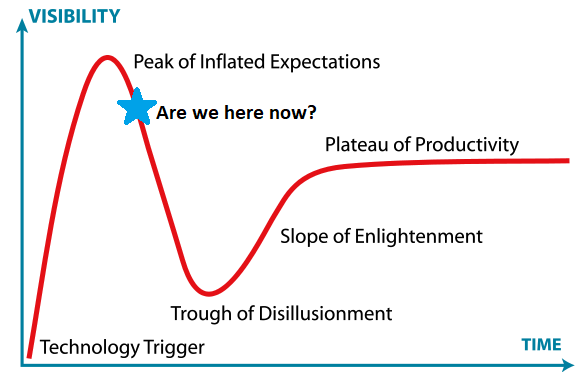 Figure 1. The Gartner technology hype curve. We are somewhere in the first peak.  Source: Gartner.

Battery-based aircraft is a near impossibility, hybrids are difficult

Vittadini’s team had made the sums. Battery driven aircraft is a near impossibility. Since doing my check on the efficiency of different electric aircraft, all I have learned in the 18 months since the series is making the equation worse.

I wrote batteries are 40 times heavier per energy unit (kWh/kg) than Jet fuel. A more correct figure would be 100 times. Battery systems designed for the first electric aircraft have a systems level energy specific weight of 0.12 kWh/kg and jet fuel is at 12kWh/kg. The battery systems might improve to 0.30kWh/kg over the next decade but not more. Not for certifiable battery systems. This is what Vittadini’s team told me.

The 100 times increase in weight for the energy is devastating but the full story is worse. If we start a flight of a jet fuel aircraft at say MTOW (Maximum TakeOff Weight), we would land the aircraft with around 20% lower weight as jet fuel gets consumed during the trip. For a battery-driven aircraft we takeoff at MTOW, fly the route at MTOW and land at MTOW. This worsens the efficiency of the electric aircraft further.

An electric aircraft has larger freedom of positioning its propulsors on the aircraft, Figure 2. But it can’t make up for the energy density problem, it brings at most a 20-30% improved efficiency. 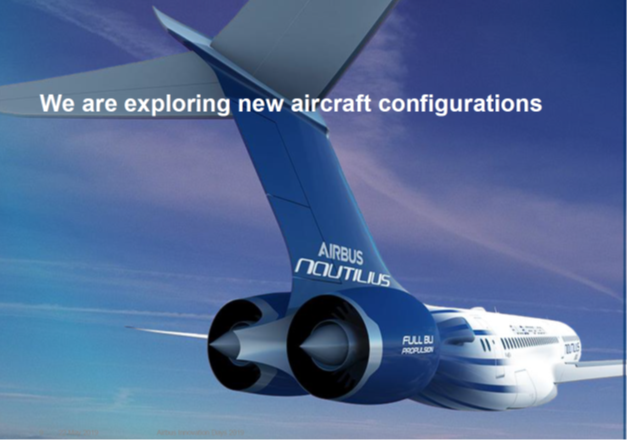 It means we have now a drag improvement of 30% compared with a 10,000% efficiency loss on the fuel side. Over the next decade, it improves to a loss of 4,000%. We don’t even have to calculate the aircraft weight and by it, the induced drag of a battery based electric airliner, to understand it’s a non-starter. Today, tomorrow and after tomorrow.

Vittadini also talked about electrical hybrids, with the BAe146 based E-FanX project with Siemens and Rolls-Royce as an example. She said it was a project to learn from. To learn about transferring 2MW (MegaWatts) at altitude over a 3,000V conduction chain. To learn how a 2MW battery can be designed and work safely in an aircraft.

The sizing of the battery is one of the problems. If the battery shall give 2MW during one hour it will weigh 20 tonnes, which is not possible. The Bae146 has a maximum payload of 11 tonnes.

With crew, test equipment and other items on board, there might be 5 tonnes left for the battery. It would then last 15 minutes when feeding a 2MW propulsor.

By the above, we realize an airliner hybrid is a gasturbine based system with a minimal battery for starting the gasturbine and as a backup in case of an engine or generator problem.

But we still have the challenge to explain why a Gasturbine-Generator-Conductor-Converter-Motor-Fan is more efficient than a Gasturbine-Fan combination. At each step in the hybrid chain, we lose a minimum 2%, most times 5% in efficiency.

The Gasturbine-Fan skips the complexity, efficiency losses and weight/volume of the Generator-Conductor-Converter-Motor complex. No-one could explain to me the elegance of the more complex and heavier system, at least not over the last 18 months.

After the euphoria of the first peak of the Hype curve, Figure 1, comes the ride down to the Through of Disillusionment. To me, we are now starting this downward ride.

Many projects are still born with inflated expectations, seeking to be the Tesla of the skies. The Corner series about Electric aircraft explains why we don’t have a Tesla situation for airliners. The Sky lacks stop lights.

But the first signs of a more realistic approach are there. Airbus’ innovation team tempers the expectations for the first time. We will see more of this going forward.

← Boeing CEO says steady progress being made on getting 737 MAX back into the air
Pontifications: 50×2 →

56 Comments on “Bjorn’s Corner: Electric aircraft, the first fall on the Hype curve”