Boeing had a call with 737 NG operators today giving the latest information regarding the cracks. Of the 500 first inspected aircraft, 5% had cracks. These aircraft are now grounded. Boeing is setting up repair lines with the US line starting work on the first NG this week. The expected repair time is three weeks for the first aircraft. 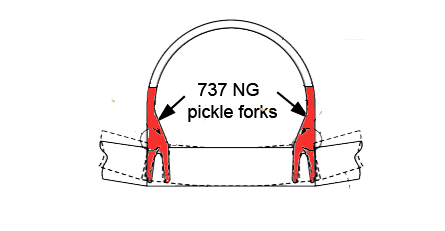 Figure 1. The rear pickle forks carrying the main loads from the wing to the fuselage crack near the rear wing spar. Source: Leeham Co.

The cracks form in the outer chord of the rear pickle forks (Figure 1) and the behind lying safety straps, just where they pass from the rear spar of the center wingbox to the fuselage side of the aircraft, Figure 2. 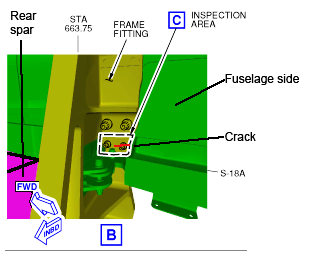 This is also the area where the fuselage side has a cutout to let the main landing gear strut fold in with its attached wheel.

The combination of a wing center-wingbox pushing wing and landing gear forces into the fuselage in an area where the fuselage has a large cutout for the folded main landing gear makes this area complex regarding forces and how these work the parts during flights.

The stress spectrum in the area can also have been affected by the later fitting of winglets on the NG, not foreseen in the original design of this area.

Winglets change the pressure distribution of the wing to a distribution spreading further outboard, by it increasing the wing root bending moment.

The results of the first week of inspections are 5% of the inspected aircraft have cracks with the lowest flight cycle aircraft with cracks at 23,600 flights.

Boeing has commanded full speed ahead with the production of replacement pickle forks and a repair line is set up at Victorville by its AOG (Aircraft On Ground) team. The first aircraft starts the replacement of its rear pickle forks Friday. It’s expected to take two to three weeks for the first job, which also serves as the master for a Service Bulletin from Boeing how to carry out the repair. Further AOG repair lines will be set up in Europe and Asia.

There shall be 25 shipsets of pickle forks available in October which covers the aircraft which cracks found to date. The safety straps also need replacement but these are less complicated parts.

Boeing is now investigating if a temporary repair can be designed and approved so aircraft with cracks can continue to fly until they can be scheduled for repair. It’s also checking if the demounted forks can be repaired to ease the demand for new forks as the inspections find further aircraft needing repair.

The wider inspection will give statistical data so the spread in cycles for cracks can be better understood. It could be the cycles shall be counted from when Winglets were fitted to the aircraft. This is one of the areas which are now needing further work and data to understand better.