Bjorn’s Corner: Why e in ePlane shall stand for environment, Part 9. Hydrogen, cont.

February 14, 2020, ©. Leeham News: Last week we started looking at hydrogen as an alternative energy source for our air transport system. We discussed the use of hydrogen as a direct fuel replacement to jet fuel, burning the hydrogen in the combustor of the aircraft’s turbofans.

Hydrogen works fine as a fuel for the turbofan but it has challenges in its onboard storage, it’s handling and production. Good reader discussions followed around those problems. Now we look at hydrogen as a fuel in a fuel cell/electrical motor propulsion system. 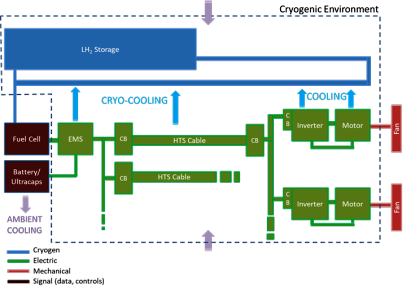 Figure 1 shows the components in a fuel-cell based airliner propulsion system with hydrogen as the energy source. The system has the same hydrogen fuel with the same benefits in energy specific weight and the same problems of storage, handling, and production as discussed in last week’s Corner.

Instead of burning the hydrogen in a turbofan combustor we now combine it with oxygen from the air to produce water and electrical current in a fuel cell. The fuel cell, in turn, drives fans propelled by electrical motors. We also need inverters and an electrical distribution system to complete the system.

The fuel cell in itself can be designed for efficiency of around 60%. The problem is the fuel cell’s volumetric power density and weight. The system then adds the weight and losses of the electrical propulsion system when compared to a hydrogen or jet fuel driven turbofan system.

There are good modeling studies done on the volume and weight consequences of such a system. In summary, the fuel-cell based propulsion system weighs about twice as much as today’s jet fuel based turbofan propulsion system.

The weight and volume requirements of the system will gradually improve over time and at least we are not 70 times off as for a battery-based power source. For now, a turbofan based hydrogen system holds more promise than a fuel cell one.

There are a number of fuel-cell based experimental aircraft projects, all of them for small aircraft. But contrary to what one thinks, the fuel cell system works better the longer range the aircraft shall have. This comes from how the weight of the hydrogen storage part scales compared with the weight of the other system components dependent on the required energy stored in the system.

An interesting development for this system type is the CHEETA study NASA issued to a team of US institutions and universities last year. The CHEETA concept uses the low-temperature requirements of liquid hydrogen to cool the electrical power chain to superconducting levels to minimize the end to end losses of the system.

How far this can be designed as a practical system remains to be seen, but it’s at least an interesting idea as the practical storage method for hydrogen for longer range operation is its low-temperature(-253° C) liquid state.

In next week’s Corner, we start putting our discussions into the larger environmental context.

25 Comments on “Bjorn’s Corner: Why e in ePlane shall stand for environment, Part 9. Hydrogen, cont.”