September 28, 2021, ©. Leeham News: When Airbus got the A220 airliner series from Bombardier, it also got the base for a competitive business jet.

Airbus, like Boeing, has produced Corporate Jets under its ACJ (Airbus Corporate Jets) since 1997 by converting its passenger A319, A320, A330, and A350 to one-off jets for Corporations, States, or wealthy individuals.

With the business jet based on A220-100, this changes. It’s no longer a one-off production but a fully-fledged Bizjet like the Gulfstream 650/700 or Bombardier Global 6500/7500, produced in series and with a semi-custom modular interior. 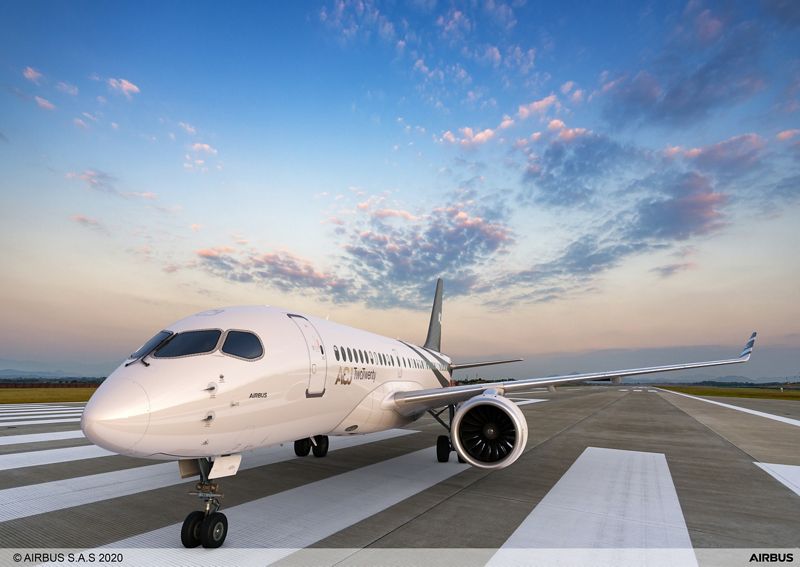 The TwoTwenty, Airbus’ entry into the business jet market

The A220 is produced for the airliner market at rate five per month right now, increasing to 14 by 2025. It forms an economic base for a business jet derivate, where an A220-100 aircraft go to a different cabin outfit location after the FAL (Final Assembly Line).

The high-end Business jet market of about 200 aircraft per year is shared between Gulfstream with its 650 and 700 and Bombardier with the 6500 and 7500. Dassault is a distant third with its 8X and from 2025 10X. It’s this market that Airbus now enters with its A220-100 transformed into a dedicated business jet.

By ferrying green A220-100s to Comlux’s completion center in Indianapolis, the production of the TwoTwenty can be smoothly integrated with the A220 airliner production.

Comlux, who is also the launch customer for the type with an order for two, fits a customizable interior based on a base cabin with a catalog of options. This is the standard in the high business jet market, where choices are wide but within predefined modules. For the TwoTwenty there are six different aircraft sections, where five can be customized, Figure 2.

Figure 2. The base TwoTwenty Cabin with optional modules. Source: Airbus.

The cabin variations are made front and rear of a common central conference area. Options are a frontal Galley and Crew area with crew rest or extended closet space, followed by a Business lounge area with different seatings, Figure 3. 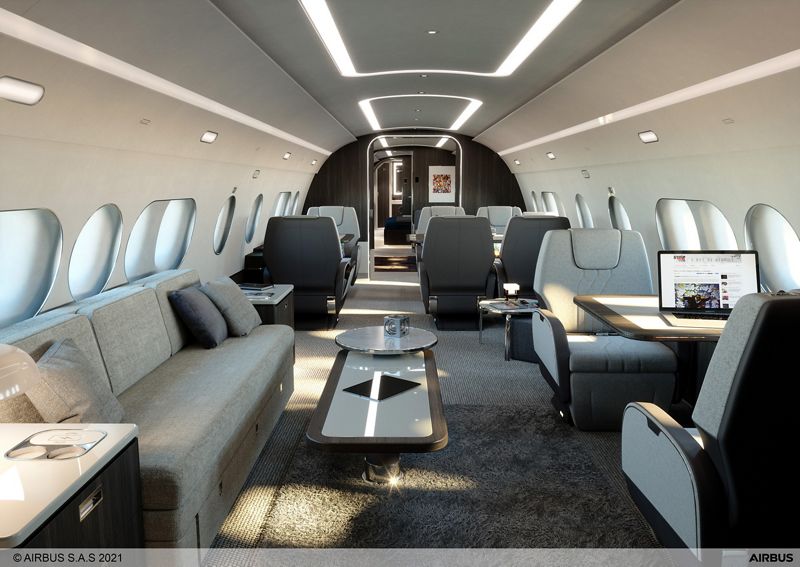 The rear is skewed toward personal space, with a Living room area in different variants, followed by a Bedroom and Bathroom. The base bathroom has a full-size shower.

The cabin changes also introduce a higher cabin pressure and increased humidity. The cabin altitude is at all times below 6,000ft, and the addition of several CTC humidifiers guarantees a comfortable environment during long trips.

The TwoTwenty is priced in the segment of the Gulfstream 700 and Global 7500 but offers double the cabin space. The cabin is wider and higher and about 5 meters longer, at 24 meters.

The TwoTwenty leverages the airliner pedigree to lower the operating costs of the jet. Fuel consumption per aircraft mile is slightly higher (it’s a bigger aircraft), but maintenance costs are lower. Airliner engines and systems are designed for 2,500 Flight hours per year, whereas Business jets fly perhaps 500 hours. A TwoTwenty owner will probably not make a major airframe or engine overhaul before it’s time to pass the jet to the next owner.

The trade between the larger space and lower operating costs of the TwoTwenty is a maximum range of 5,600nm versus the 7,000nm for the competition, which has a cruise speed of M 0.9 versus the TwoTwentie’s M 0.8.

So what does this mean in practical use?

Flights longer than 5,600nm pass the 12 hours mark and make up the odd percent of high-end Bizjet flights. The difference in cruise speed means a US transcontinental flight takes five hours in the TwoTwenty instead of 4 hours and 45 minutes for competing jets.

The buyers in this $70-$80m segment have a choice to make. To fly direct on the occasional 15-hour flight or prioritize space and economy for the bulk of the jet’s usage.

Is the TwoTwenty good business for Airbus?

Business jets are sold at close to list price, whereas airliner deals are made with heavy discounts. The net price for a TwoTwenty will be close to two times the net price of its airliner sibling.

Though the management of a TwoTwenty business is more elaborate, and the special cabin costs considerably more than the standard A220 cabin, there should be margins left that make the TwoTwenty a good business.

By introducing the changes after the base aircraft has finished a normal FAL production, disruption of the airliner production is avoided. The changes introduced at Comlux are separate from the A220 production line and leave an uninterrupted airliner production to tap future TwoTwenty’s from. The first TwoTwenty will leave Comlux’s completion center in 2023.